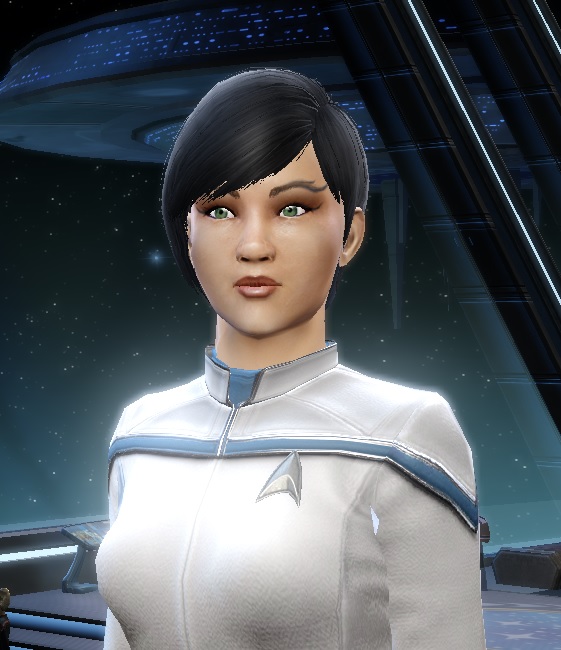 Dr. Tronstad, or Eve as she prefers to be known informally, is a Starfleet Medical Doctor and specializes in infectious diseases. Dedicated and ambitious, Eve is drawn to the unknown. She dreams of being among the first to document and study pathogens that are not yet known to Federation scientists. She requested to be assigned to Guardian Station after graduating from Starfleet Academy, reasoning that its proximity to the Barzan wormhole to the Delta quadrant would make it likely to be the first contact point in the Federation for anyone with a new illness from the Delta quadrant. Since learning of Starfleet's Delta Exploration Initiative, Eve has been requesting a transfer to ships assigned to the initiative so she would no longer have to wait for something new to come to her.

Early years
She born to Anders and Ingrid Tronstad in the city of Minneapolis on Earth, in the spring of 2373. Her parents are also medical professionals, her mother a cardiothoracic surgeon, and her father a primary care physician.

She was raised there, along with her two siblings, in a safe and comfortable environment. Her parents often discussed their work at home, but as Eve grew older she noted that there never seemed to be anything that her parents didn’t know how to handle or treat.

In her history lessons, she had learned of an encounter with an alien race known as the Vidiians in 2371 by the starship Voyager in the Delta quadrant. They were considered to be an advanced civilization but had been attempting to cure a disease for two millennia and hadn’t succeeded.  The story resonated with Eve, possibly as it seemed the polar opposite of her safe and uneventful experience of life on Earth. She wondered if any of the races of the Federation could have been at risk from it and she wondered if Federation doctors and scientists could have succeeded where the Vidiians themselves had not.

The end of the story was unsatisfying. Voyager had encountered a group of aliens a few years later and they had claimed to have cured the Vidiians as part of a larger list of boastful achievements.  Those aliens had proved to be deceitful and Voyager had been stranded in the Delta quadrant at the time and was traveling back to Earth. There were no further encounters to validate the claim and most disappointingly, no details on how they had achieved it.

Eve had asked her parents lots of questions on the subject, but it wasn’t their specialty. Their responses would just outline a general approach to how another doctor would set about researching the disease.

Eve excelled in her schoolwork soon utilized her research skills to pursue her own answers, looking for cases of similar incidents in Earth’s history and what approaches had been tried to combat them.

Eve went on to study medicine and found that her own research meant that she already knew more about the area of infectious diseases than her peers. They’d often come to her for assistance when the subject matter touched on that area. It became her natural specialization.

She graduated medical school as salutatorian of her class and opted to join Starfleet since she knew the interesting challenges lay far from her comfortable upbringing. She retained a fascination for the Delta quadrant and the vast amount of unknown phenomena it must still contain.