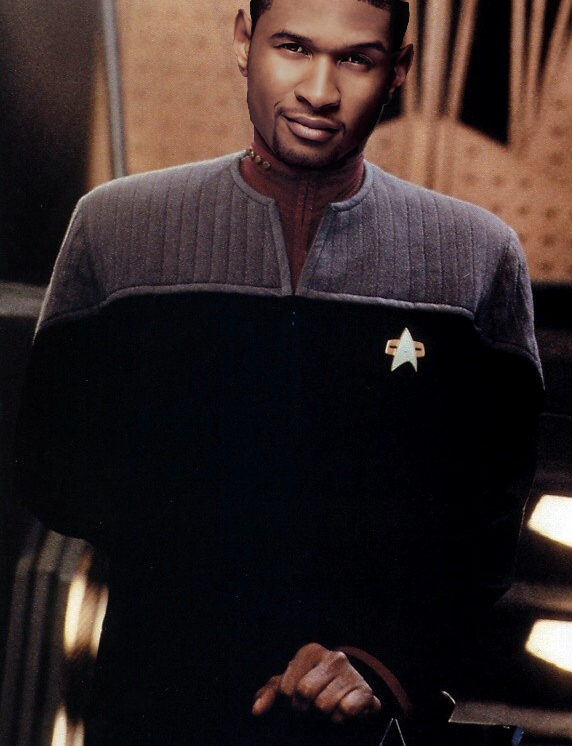 Having returned once more to the center seat aboard the starship Hope, Captain Varik Raymond leads his crew into the vast Inconnu Expanse on a mission designed to rally Federation support and assets in the region.

Varik is the second youngest son of T’set and Burgess Raymond. His mother Doctor T’Set, is a member of board of The Federation’s Commission on Medical Ethics. Burgess Raymond is Xenopsychology professor at the Vulcan Science Academy, and his love of the late 20th and early 21st Century was passed on to Varik.
A solidly built man with dark skin and hair, Varik’s ears are slightly pointed, and his dark brown eyes give off a warm glow. He is very strong and a natural fighter, thanks to his three older brothers. Varik’s overall physical appearance aids him in exuding the welcome feeling most who meet him encounter.  It is believed that this impression is an actual innate telepathic ability the man evinces. Having to survive in a family of seven people (3 brothers and a younger sister), forced Varik to mature at an accelerated rate. Varik became the organizer of the family; he could keep anyone on schedule.  He even has a knack of organizing people without them even knowing it is happening.  He is also able to find his way around unfamiliar computer systems, to him, it is a near-Zen like ability — he merely has to visualize the way the computer interprets its data and work from that starting point.
Following his graduation from the Academy, he was assigned to Starbase 416 as the assistant to Admiral Dowi’s attache. He enjoyed working for the admiral, but after a while it became clear that he wanted to be on a starship.  The starship Victory, of Task Force 38, was his first mobile post.
Varik maintains broad sense of humour somewhere in the margins between logic, the ridicule thereof and absurdity.  When not on duty he is content being by himself, but welcome and often invites company. Owing to unique properties inherent in his particular heritage, he often receives empathic impressions when making skin-on-skin contact. Though at times Varik presents as cold and logical, he just as often exhibits the humanistic warmth he inherited from his father.