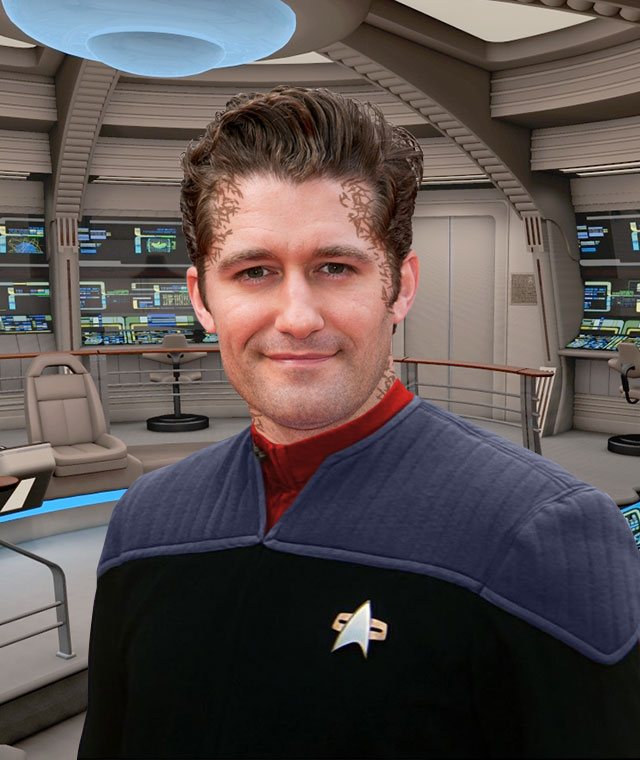 Batai is an interesting individual, due to his status as a joined Trill.

Batai’s history is in a word … complicated. As a child, he went through the normal Initiate program at the Symbiosis Institute, and was deemed fit for joining. After completing normal schooling, and then going on to work towards getting an education as a doctor, his parents pressured him to stay on the Homeworld and work with the Institute. He had other ideas though, and wanted to join Starfleet. This decision caused a rift between him and his parents, and the relationship is very strained.

During an away mission, Mavala Dhej, a security officer was seriously injured. She was in critical condition, and would need to remove the symbiont to ensure its survival. As the only unjoined Trill aboard, Karim made the decision to join with Dhej. He knew it would be a complicated joining, as they were typically done under more normal circumstances. After the joining was complete, he had difficulties adjusting to his new reality. Due to these challenges, he requested an extended leave of absence, and left the Hera to recover at Starfleet Medical. He knew he should’ve returned to the Homeworld to work with the Institute to recover, but he didn’t feel comfortable doing so.

After about 6 months of recovery time, he was eager to get back to work. He knew he wanted to start slow though, and after searching for open positions,  he completed extensive upgrading on command courses and applied and was assigned to the USS Pasteur as  Executive Officer. Once the USS Sirona was set to be launched, he was offered the position of Commanding Officer and promoted to Lieutenant Commander. Over time, he was promoted to Commander, then Captain.