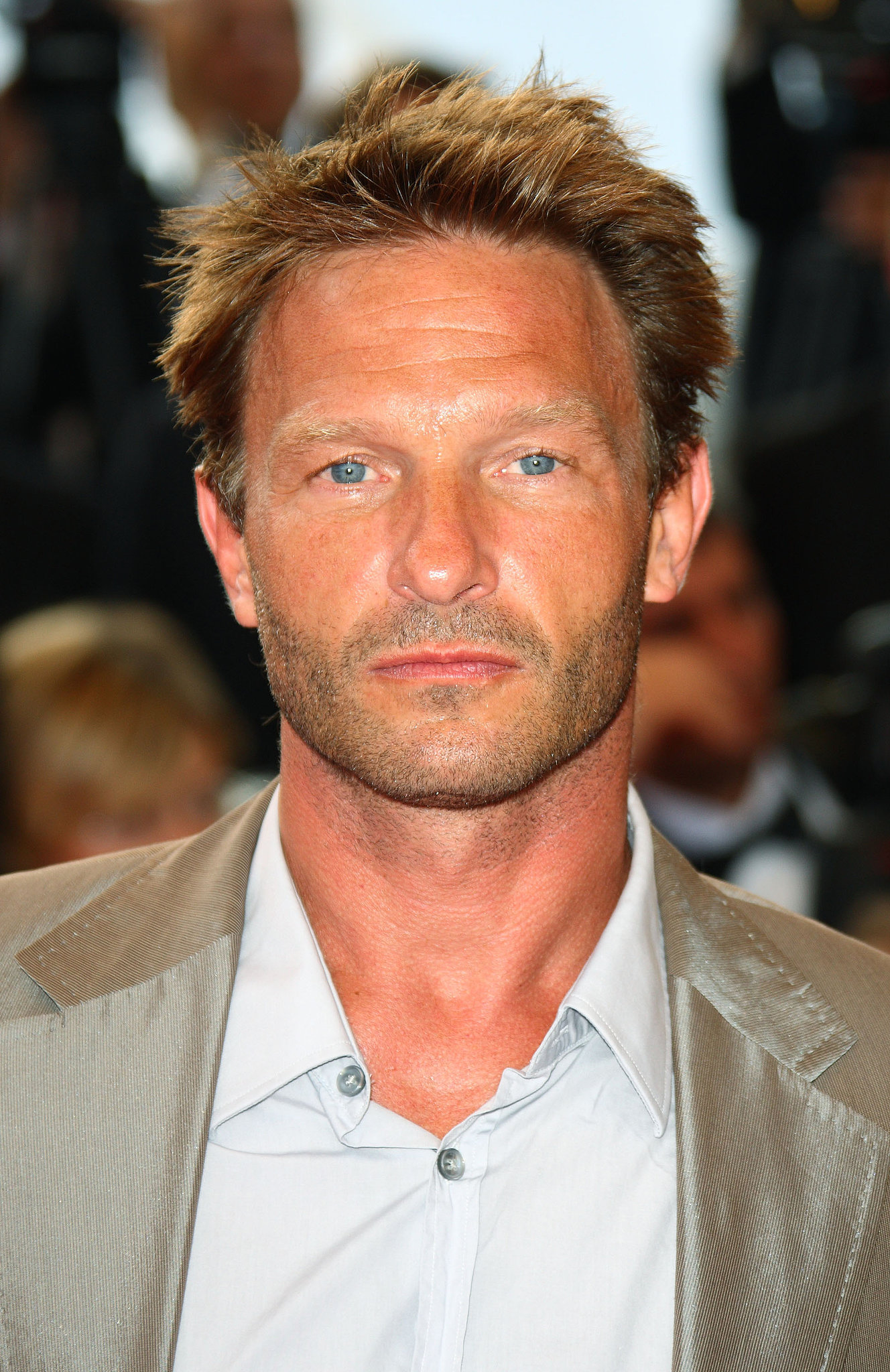 Himmel is a pretty low key man. He is very thoughtful in each of his actions. Doesn't take things to fast especially in later years. The ship is his favorite office. He is easy going and enjoys relationships with the crew as well as his engineers. Always open to a joke and conversation.

Soren Wilhelm Himmel was born April 10, 2341 to the German family Martin and Gina Himmel. Soren grew up outside of Munich, Germany. His family prided themselves on their German engineering and always remained inside the old sovereignty of Germany. His father worked with designing transports, specifically for domestic use around Earth, vehicles that would travel under the Earth’s atmosphere. As he moved up he would help in the designing and maintenance of outer space ships. Soren’s family had never a desire or need to leave Earth or Germany to “explore” or see other places. They were always content with their situation on Earth and the only trips for Soren’s family remained on planet. His uncle did make trips to the Moon for his work involving mining. Soren, however, was the first of the Himmel family to leave the Solar System.

Under his father’s supervision, Soren would develop his engineering skills. He would watch his father work and aid him with projects as Soren grew older. He had a keen skill to figure out how things connected and work. With this natural skill he even developed ways of designing small engines with more efficiency. He would try to get his brother, Martin, to join him in his projects, but Martin never had the same interest. Soren developed better social skills, always seeking out friends to test his equipment or at the very least watch.

During Soren’s teenage years he began reading up on starship engines and ship construction. Not only of Starfleet vessels, but alien ones, outside the Federation. This also sparked his interest in philosophies and cultures of other planets. His brother was showing a strong interest in entering the ministry, and they remained close. So talking with one another always left Soren in amazement over the ideas and thoughts shared or differed among people. The information of engines and culture fascinated him and lead him more interested in Starfleet.

Soren applied to Starfleet Academy when he was 17, and he was practically a shoe in. His knowledge on starship engines exceeded many first year students at the Academy. He was accepted into Starfleet Academy, College of Engineering and began his course work in 2359, San Francisco. While at the Academy his interest in the classics and literature was sparked more, now that he practically lived in an entirely different community from his own. Art and music also began to interest him. His course studies were relatively easy for him since he had experience with engineering and it gave him time to read.
Soren’s Academy days were very influential and he became close friends with fellow engineering student, Ron Allaway of Scotland. Between the two of them they were some of the brightest engineering students. They also caused a lot of antics to get the attention of the female students, and finding ways to win them over. Many were failures. While Ron and he caused some trouble, his friends found Soren to be very thoughtful, trusting and had the heart of an explorer.

Soren graduated from the Academy with the class of 2363 with a Bachelor of Science in Starship Engineering, Warp systems emphasis and Starship Architecture. He was ranked in the top 5% of his engineering class, but 30% overall. His first assignment was to aboard the USS Farragut, a Nebula class. He was slightly disappointed because he wanted to get his hands on the new Galaxy class ships being introduced.

Before his first assignment aboard the Farragut, Ensign Himmel went back to Germany for some time with the family before making his departure. While home he caught the eye of a University of Berlin pre-med student, Regine Meier. Apparently she was from a small town outside of Munich and did not make many trip in town until many of her friends moved there. They quickly fell in love. They never understood why, but they thought it was because of their common interest in philosophy, art and music.

The Farragut was exactly the experience Himmel was looking for when he entered Starfleet. His tour on other ships at the Academy did not compare to his experience with the Farragut. The places and cultures he saw were beyond any dreams he had. Regine and Soren kept in contact during his year with the Farragut and upon his return, before taking new orders they were married.

Soren found himself in a tough position, because he wished to remain with Regine, but also get back out into space. An opportunity came up for him though. He was confronted by a former engineering prof to help in the Sovereign class project. Soren was only a year out of the Academy and felt that there wasn’t much he could do to help. However, his professor sent in a good word and they brought him apart of the large team to construct a new flagship of the Federation.

For the next five years he was able to remain on Earth with Regine as she finished medical school, however she couldn’t stay with Soren because she knew his commitments to Starfleet would pull him away, so she cut off the relationship. Soren aided engineers with the Sovereign project and continued that work. He was one of the youngest members of the entire project, but did not hold any prominent position. However, he was well respected and looked to for handling construction and testing. His part was relatively small, but he felt he had a great impact.

He was then given the opportunity to provide support for the initial testing of the Sovereign after it had been built. The next two years were spent working out the kinks and making it more efficient. Himmel was hoping to receive an engineer slot with either the Sovereign or the newly built Enterprise-E. Those ideas were dashed quickly once the Dominion War broke out. Ships needed engineers to support the increase in damaged ships. Himmel recognized the call and volunteered to be reassigned to help the Federation at war.

Lieutenant Himmel was thrilled to be back out in space, however the circumstances quickly humbled him and being assigned to the USS Galaxy showed him the damages of war. The Galaxy was a prominent ship during the War and was nearly destroyed. Soren saw firsthand how dangerous space could be and he longed to be home.

After remaining an extra year with the Galaxy after the war to assure conflict was over for a time. Himmel decided to be reassigned to the Canterbury as Assistant Chief Engineer. Earth didn’t have much to offer him and he enjoyed the opportunity to explore space and not be like his family before him. Himmel was getting his feet wet learning the ins and outs of Engineering to eventually lead the department. The Canterbury’s deep space expeditions led Himmel to pursue a Chief Engineer’s post.

His first post as Chief Engineer came when he was placed on the Deimos. A position a loved and adored. He gained much experience with the Deimos and learned what it takes to be a Chief Engineer of a starship. Somethings he learned had never occurred to him while moving up the ranks. Deimos was a good learning experience for Himmel.

After four years being aboard the small Luna-class ship, Himmel took up a position as a professor at Starfleet. At the time he wished to pardon some of his knowledge and experience to the up and coming engineers of Starfleet. His efforts were to try and bring classroom knowledge and practical experience as close together as possible. It was a post that helped him to learn things that had otherwise been forgotten. After seeing students graduate he felt left out and the need to go back to Starfleet and explore. He was still young enough and experienced enough to do some good.

Word came that a new Sovereign ship was to be commissioned, in the Gamma Quadrant no less. Himmel desired to be back on the much larger Sovereign ship. He had never been to the Gamma Quadrant and it would certainly be the farthest any member of his family ever travelled. His time with the Deimos and instructing at the Academy gave him knowledge that he felt would be useful. He requested to be Chief Engineer of the USS Vindex.