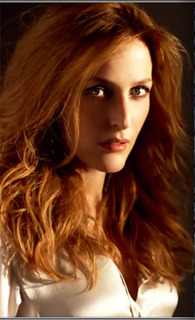 Cara is a strong individual and an honest and loyal friend to those she trusts. She loves to joke around and rarely is serious. She absolutely loves practical jokes. When she loves she loves hard. When she plays she plays hard. She is almost anal when it comes to her job. She is a stickler for everything in its place. She is a generous leader yet she is tough when needed. She respects those who work with her and never asks anything of those under her that she would not do herself. However....she has a short fuse and a hot temper. You definitely do not want to get on her bad side. She has little tolerance for chronic sniveling. Probably her worst attribute is her propensity to speak her mind no matter the consequences. She hates being referred to by her rank.

Cara’s mother died when she was 4 and, since her father was the captain of one of Star Fleet’s special ops starships and, therefore, gone most of the time, was raised by her Godparents.  When she was 8 her father went missing during an assignment on a non-Federation planet and after a year, Star Fleet determined him to have died in the line of duty.  Cara was devastated by her father’s death and she became angry and rebellious.  But with the patience and love of her Godparents she was able to turn her rebellion into a dream of following in her father’s footsteps and joining Star Fleet.

At a young age, Cara showed an interest in medicine…..rendering first aid to her dolls and neighbors’ pets.   So she took ROTC in high school and began taking computer courses in advanced biology and alien anatomy and physiology along with some added extra credit high school courses.  She excelled and managed to graduate high school early and applied to Medical School.  Because of her grades and obvious devotion to achieving her goal, her Godfather, who was a tenured professor at Star Fleet Academy, convinced Star Fleet to take a chance on his Goddaughter and Star Fleet Medical agreed to accept her application to the Academy.  While most 16 years old girls were focusing on fashion, boys and proms….Cara’s focus was on her studies.  She continued to take extra courses outside of her Academy courses.  Cara graduated the Academy and went straight into medical school where she specialized in emergency trauma medicine.  Her first assignment was the USS Wilkesboro where she worked her way up to Assistant Chief Medical Officer.  Her assignment ended when Star Fleet decommissioned the ship.

She was transferred to the remote Outpost 67 to serve as ACMO but a year after she arrived the outpost’s CMO decided he couldn’t handle the remoteness of the outpost and resigned, throwing Cara into the position. Five years later Starfleet uprooted her again and sent her to Starbase 900 in the Delta Quadrant where she has been running their medical facility.