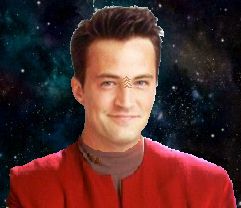 Nige was born on Bajor On August 2nd 2369 as the Cardassian occupation was ending. He grew up as Bajor rebuilt and has a strong sense of patriotism about Bajor and also a strong hate of Cardassians. As he grew, the Cardassians went to war with the Federation as an ally of the Dominion. At this time, he was still too young to do any fighting himself and remained on Bajor.

Once the war was over, tension between the Federation and the Cardassians remained high. This wasn’t the first time the Cardassians had gone to war with the Federation and Nige was intent on being a part of the Federation for the next war. As it happened, no further hostilities occurred and Nige remained adamant about joining Starfleet. At the age of 17, he met a young woman named Jin Dinara and the two began dating. It was also at this time that he was given a cat by his parents. Now with the cat and Dinara on Bajor, Nige began to have doubts about applying for Starfleet academy. Nige eventually decided that he would go to the academy and promised Dinara that when he was an officer aboard a Starfleet ship, that she could come and live with him onboard the ship as a civilian.

Nige didn’t have a great deal of difficulty in the academy. He enrolled as a security officer, not the most intellectual course, but certainly one of the most physical. Nige was a strong athlete and didn’t have too many problems. He graduated 2nd in his class.

While on Earth, he met a young Vulcan named Tumock. The two became friends and graduated at the same time. Where as Nige graduated as an Ensign, Tumock was an outstanding cadet and graduated at the rank of Lieutenant Junior Grade. The two officers were assigned to the USS Knight for exploration beyond Cardassian territory.

The two arrived on the Knight and were instantly thrown into one of the most difficult encounters a Starfleet ship had ever had to face, what is now known as the Kelvan Illusion. The Talosian people had foreseen a Kelvan invasion and picked the Knight to test the readiness of the Federation to defend the Milky Way against the Kelvans. The Knight passed the test, but not without taking a toll on some of thee crew members. In the illusion, most of the Federation was destroyed, including Bajor.

Due to this illusion, Nige thought it was time for Dinara and his cat to come and live aboard the Knight where he could keep an eye on them. Nige also received a promotion to Lieutenant and was given the position of Chief Of Security.

The Knight received a new Captain, Captain Kenji Osagawa, and proceeded on its mission of exploration. The next enemy they encountered were known as the Protectors. These were merciless robotic creations that would stop at nothing to defend their planet. They attacked the Knight and took over. Nige played a part in stopping them, but was injured and was unconscious for a long period while Captain Osagawa finally brought about the defeat of the protectors. The Knight was next ordered to Deep Space 9 where she was to rendezvous with a large fleet that was to engage the Barien fleet that was attacking the Federation. The Knight proceeded to the battle where all Barien ships were destroyed.

Almost immediately after the battle, the Protectors somehow reactivated and killed Captain Osagawa. This time, Nige, with the help of Lieutenant Commander Kira Markos, dealt the final blow to the protectors, ending the threat. Or so he thought. A file was found in his database, as well as Kira’s that the protectors would some day return to take revenge on him and Kira. Nige was then promoted to Lieutenant Commander and to Executive officer of the Knight.

Nige and Dinara were later transferred to Earth along with Kira Markos pending reassignment. The three were then assigned to the USS Ronin. Starfleet Reassigned tyran Nige and his Wife Dinara to the USS Sentinel as the new Chief Security /tactical Officer under Captain McCullen with the rank of Lieutenant Junior Grade . in 2400 starfleet reassigned tyran and his wife to the U.S.S. Amandora as the chief Operations Officer under Commodore Cyndi Song with the rank of Lieutenant Junior Grade.