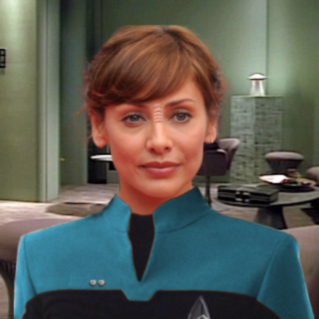 Jeela now finally has her own ship and many people to help. After two assignments as an assistant, she has finally found that one of her ambitions has come true. As the Cheif Counselor on the USS Cygnus, she hopes to be able to help people and also be able to keep the peace as much as she can. Sure, her beliefs may get in the way at times but... who doesn't like a little drama from time to time? Now that she met the Cygnus at Deneb IV, she is now just getting settled in. What happens after that? Only the Prophets would know.

Born on Bajor, Jeela was caught in chaos during the Cardassian occupation.  If it were not for a Security Officer by the name of Jerry Hawthorne, Jeela probably would not survive the torture that her family endured.  Saved as an infant and brought back to Earth, she was raised by her adopted father and adopted mother, Thu.  Her adopted mother was a little reserved but stuck in the old ways.  She always thought that a meal was not meant to be replicated, it was meant to be prepared from scratch.   Her father was of the new ways though as he taught Jeela about the technology and how to defend herself.

Yes, Jeela was bullied and ridiculed at first when she started school but with her father’s training, she was able to defend herself from all of the fights.  She always tried to use reason as much as she could but if she had to fight someone, than she would do it.  Her eyes were always looking towards the stars as her wish was to return home eventually.  There were many directions that she could take but with the offer of helping people through her problems, she decided to join Starfleet.  With her parent’s blessing, she set off towards her new adventures and new challenges… where ever they may lead.

During her time at the Academy, she was very surprised that no one was bullying her for the ridges on her nose.  Once she was able to actually be herself, Jeela went through the Academy almost through flying colors.  Sure there were missteps along the way when her advice backfired and caused a fight between two people… but eventually, the combatants settled things (as it was due to a minor disagreement) and moved on.

After graduating from the academy, her first assignment was on the USS Saratoga as an assistant Counselor.  As an assistant, she mostly dealt with all of the “paperwork” and the menial tasks of filing and keeping the records intact.  For about 3 years, Jeela wanted to be able to do more to help people and maybe be more involved in some diplomatic activities.  She wanted to be able to help people get through their problems but there were times when she had to study different races through conflicts.

The most notable conflict that Jeela faced was when a Ferengi man claimed a starship when he thought that it was going to be salvaged.  The problem was that a Cardassian delegation wanted to recover the ship and take it back into their space.  The Ferengi stated their Capital Assests rule in their claim but the Cardassians stated that they have full sovereignty over their ships, disabled or not.  Though Jeela hated to deal with the Cardassians in the first place with her upbringing, she eventually settled things by having the Cardassians give 300,000 credits to the Ferengi in exchange for the Caradssians to take back control over their ship.  To the Cardassians, they did not want to give away money but she persuaded the Gul of the Cardassian delegation that money was the only thing that would make the Ferengi happy.  With the payment, the dispute was settled and nothing ever came out of that dispute.

With the word circulating through the Starfleet Counseling and diplomatic channels after the Ferengi incident, it was decided by Starfleet Command that Jeela was ready to be a Chief Counselor.  Where her next assignment will be?  That is all up to the Prophets to decide in her view.