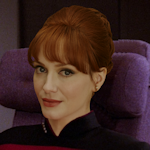 Born in 2364, Jordan is the oldest of three children. Her parents were both tenured professors at the local university that she had attended and graduated in 2386 with a degree in music. Upon her graduation, she and her parents got into a disagreement about her future. They wanted her to accept a position at the university in the music department and she wanted to accept a position with a traveling symphony. With neither side willing to concede, she stormed out of their house and began walking around town. She eventually came across several StarFleet cadets that were out and celebrating the end of a tough exam week and struck up a conversation. Knowing it would hurt her parents, she went and signed up the very next morning without saying a word.

A few weeks later, she took the entrance exam and failed it. Her parents had discovered this and were pleased at the failure and hoped it would make her see things their way. This only made her try harder to get in. Six months later, she was able to take the exam once more and she was pleased to have heard that she had passed it this time. Three days later, she left for the Academy.

Ambitions: Jordan wants to be the Captain of her own starship

Hobbies & interest: Jordan’s favorite past times are sitting with an old fashion paper book and a cup of coffee or playing her
violin.