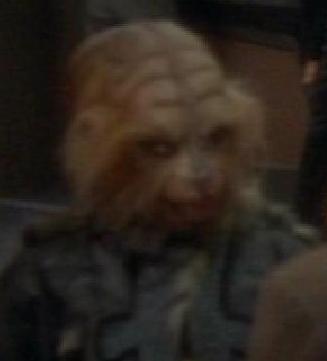 Born in Dast, Antica on June 15, 2380 to the leader of the Das'ri Forest pack and his wife. Was homeschooled until the age of recognition (13). Continued to do self study when she could for the next two years. Decided she wanted to join Starfleet, and after a going through the Prepatory Program and rigorous entrance exam that she easily passed, was admitted in 2395 under special allowance.

Life on Antica
Sor’aa was born on June 15, 2378 in the small city of Dast on Antica to Gorev, her father and the leader of the Des’ri Forest ‘Pack’, and Palel, her mother. She has an older brother, Jacel, two years older than her. She received the best education and training that homeschooling and private tutoring could provide. She grew up as the ‘pack princess’ but timid and shy she was not. She worked hard in her studies and training, continually proving herself the better among her peers. She really excelled in combat tactics and fighting skills, where she was just as capable as those three and four years her senior.

Rite of Emergence and Thoughts of Starfleet
At the age of 13 (2391), she participated in the Rite of Emergence. It was considered a coming of age ritual hunt and ceremony for the boys of the pack and was lead by a few of the best male warriors. Though a female could join the rite, it was extremely rare that a girl would want to. Even though the boys and men weren’t thrilled with the idea, they knew better than to argue or complain. She was the leaders daughter after all and had proven herself worthy multiple times in her training. Of course, they came back successful. It was during this time, that she desired to do more than just stay with her pack on the planet. She wanted to get out and explore the universe. She had learned about Starfleet in her studies and the more she thought about it, the more is was interested in wanting to join.

Extra Study and Getting Into Starfleet
Sor’aa decided to tell her parents that she was interested in joining Starfleet. Her father wasn’t as thrilled as her mother, but he knew that it was a choice only she could make. Gorev told her all he knew about Starfleet, the Anticans pursuit of Federation membership, and the eventual admission as a Federation member. Since the Anticans were Federation members, she didn’t have to go through so many steps but she decided she still wanted to go through the Starfleet Academy Preparatory Program to ensure her entrance into the Academy. She decided to prepare as much as she can over the next couple years as she was too young to apply. With her fathers assistance, along with the Central Pack, she was able to get the needed materials that she needed to get ready for the Preparatory Program application and studied whenever she could as life on Antica continued.

Starfleet Preperatory Program and Academy Entrance Exams
On her 15th birthday (2393), Sor’aa applied to both the Preparatory Academy and Starfleet Academy and easily gained admission into the Preparatory Program. Sor’aa was sent the coursework while she awaited a transport to the Academy on Earth. Once on Earth, she worked hard to pass the program but managed to satisfactorily pass everything they threw at her, including the Entrance Exam itself. She was immediately accepted into the next cohort of the Academy, Spring 2394.

Starfleet Academy Life
Sor’aa had decided on the Security and Tactical major since she was always good in a fight and it was where she could get the most action. She excelled in her basic and advanced hand to hand combat training, survival strategies, and tactical analysis courses. She showed her prowess in the ‘ring’ early in both unarmed and knife combat, besting her peers and even eventually her instructors. She also had courses, and did decently well, in diplomacy; interspecies communications, ethics, and protocols; basic and advanced weapons training; and Earth and Early Starfleet history. She had a few minor incidents related to fighting and getting along with other so she continuously had to work on that. She got along quite well with the other ‘agressive’ species like the Tellerites, Andorians, and Klingons but not so much with the more ‘passive’ species. She was even recommended for the Advanced Tactical Training School after her Basic Training at the Academy, which she also passed with flying colors.

First Assignment
At her Academy Graduation in 2399, she was assigned as the Assistant Chief Security/Tactical Officer on board the USS Adelphi. A couple days later, she was on board a shuttle heading towards Starbase Delta Bravo, where she would then be shuttled to the USS Adelphi to begin her new life on an Ambassador class startship.