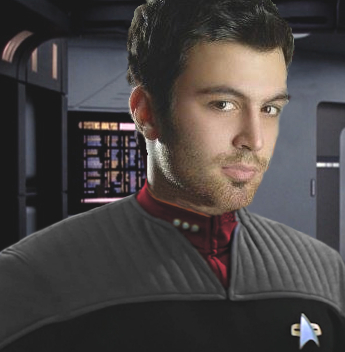 Akiva ("Kiv" to his close friends and family) is relatively tall and lithe for most Hebron colonialists. His dark Semitic features complement his melancholy demeanor. A career of hands-on work has kept him in peak physical form. He has recently become a new father of a sort with the development of a "next-gen" synthetic android through bioneural circuitry and cutting-edge molecular cybernetics. Biynah, as he named her, has become like a daughter to him.

Akiva was born in 2356 on the Hebron Colony, one of the first extra-solar Human colonies from the pre-Federation era. The Jewish colonists developed their society around isolation, and Akiva is a reflection of that. He likes people well enough, but he does not seem to bond with them as closely as he does with books and computers. Despite his introverted personality, he is not shy about his opinions or thoughts, but will not share them unless he feels they will be heard or if need demands it. His rigid devotion to his duties and responsibilities is rivaled only by his pride in his Jewish heritage, although he believes both are expressed through actions better than words.

Having a professor for a father, Akiva is well-versed in the history, lore, and philosophy of his people and many others. New experiences and cultures are among the few things which bring him out of his withdrawn and aloof disposition – even if he finds individual people disagreeable. Akiva has a quiet strength that is patient and kind at the core, but his melancholy temperament does not express it well. His family has described him at times as socially oblivious, but world experience has smoothed over the rough edges. Akiva does not make relationships quickly, perhaps because the loyalty he shows those he has granted trust is unwavering. He is not one to hold a grudge, although the few exceptions have been bitter. Pensive and thoughtful, Akiva will often play the devil’s advocate in conflicts and discussions, if only for argument’s sake.

Akiva wishes for the enclave that is his home colony to be opened up to the greater galaxy. He was the first in his family to join Starfleet, with his youngest living brother following in his steps (currently a medical cadet at the Academy).

Rather than further isolate themselves from the Federation, Akiva wants to see Hebron step forward as a cultural and technological leader, and he sees his career in Starfleet as his contribution toward that goal.

The strain in his family between the siblings who followed his example and those who have not has kept him from returning home more than twice since his graduation. He prays often for eventual reconciliation.

Akiva enjoys experiencing new cultures from a distance – preferably via holodeck or PADD. He took up sculpting at an earlier time in his life, and while he developed a knack for it, none of his sculptures have been exceptional. In his off time, Akiva can be found in the holodeck with period piece programs or in the Lounge, PADD in hand, developing anything from a custom systems upgrade to poetry.

Most recently, Akiva headed up a ship-wide project in the construction of a synthetic lifeform heavily modified from the famous Soong type android. After completion, Akiva has taken the android as a ward, effectively becoming a parental figure.