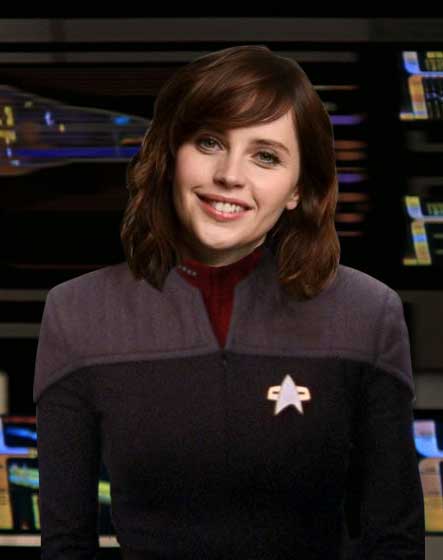 Claudia is a very positive and forward looking person who enjoys life. She likes to lead by example and sets a number of standards she likes to be met - although Claudia firmly believes that everybody has their own abilities and doesn't feel aggrieved if people make mistakes.

Claudia is a friendly and welcoming person who will always leave an open door to her colleagues. She firmly believes that people deserve a second chance no matter what they have done - and Claudia will never give up on a lost cause.

She is always open to ideas and will happily admit if her own ideas aren't as reasonable or practical as those of other officers. Claudia's decision making is always based on taking everything into account before taking a decision.

Claudia was born in Maida Vale, London in 2352 as the eldest of two sisters. Her parents – an English father and a German mother – were both teachers and both Claudia and her sister Heidi both benefited from an excellent education which prepared them for their lives ahead. Claudia was the quieter and more reasoned of the two sisters – although she was popular during her school days she was less willing to go against the proverbial rule book than Heidi was.

During her school days Claudia took a great interest in space and the stars and longed to go into space. Her family had remained on Earth even after the advent of warp drive – however Claudia was different as she wanted to go and explore the stars. She told her parents repeatedly of her desire to go into space – and for many years Richard and Elizabeth Ainscow would tell Claudia that there was plenty to do on Earth and there was no need to go into space – however they eventually realised that Claudia wanted to go and explore the stars more than anything.

They encouraged Claudia to pursue her dream and eventually upon reaching 18 she applied for the Starfleet Academy entrance exam. The tension between submitting the application and Claudia being accepted was massive – however when Claudia was accepted she went to San Francisco to sit the entrance exam. She put her heart, soul and utmost effort into the exam and shortly afterwards Claudia was pleased to find out that she had been accepted for Starfleet Academy.

Returning to Maida Vale to share the news with her elated family Claudia set about saying her goodbyes to her family and friends who she had been around almost daily for the past eighteen years. It wasn’t an easy goodbye but she promised that she would return whenever she could. Emotionally Claudia bid a final farewell and moved to San Francisco in 2370 to begin her four years training to become a Starfleet Officer.

Claudia struggled to settle in at first but after a short while she began to feel at home in San Francisco. She soon made a decent number of friends of various different races. It fascinated her just how many different races were a part of the vast Federation – and their stories of their home worlds fascinated her beyond anything she had previously imagined.

Finally after a long four years it was worth it – as in 2374 successfully Claudia passed her training with flying colours. Her parents and sister Heidi proudly watched Claudia graduate – and after a short return home to Maida Vale Ensign Claudia Ainscow received her very first assignment – an Operations Officer aboard the USS Trident which was serving on the front lines in the Dominion War. Almost immediately Claudia found herself serving in the First Battle of Chin’toka. It was a massive learning curve for her as she made plenty of mistakes – but she was happy to have Lieutenant Commander Paul Alexander on hand to guide her along every step of the way. In the final push for victory over the Dominion once and for all Claudia and the Trident found themselves fighting in the Battle of Cardassia.

Serving in the Dominion War was a harrowing experience for Claudia but she gained a massive amount of experience. Part of her felt that she would never return to Earth again – but even to this day Claudia will never admit that she regrets joining Starfleet when she did. In 2375 Claudia briefly returned home whilst the Trident was repaired – however it was soon back to business. Claudia remained aboard the Trident for almost another year before deciding to take the opportunity to join the brand new USS Endurance – also as an Operations Officer.

Claudia liked her new surroundings aboard the much larger and modern Sovereign-class starship which was destined for the Beta Quadrant. It was a relatively uneventful first few years however her hard work persevered and she earned a promotion to Lieutenant Junior Grade in 2378. She had a great deal of admiration for her commanding officer Captain James Grundy – and she aspired one day to be just like him. His “get the job done and have fun later” attitude earned a lot of respect from Claudia – and she vowed to use that model herself once she got to the top level.

In 2379 Claudia was appointed as Assistant Chief Operations Officer after being recommended by her department head for the vacant position. In November of the same year Claudia became pregnant and in August 2380 gave birth to her daughter Grace. To protect her daughter from the dangers of being in space Claudia agreed that it would be best if Grace lived on Earth with Claudia’s sister Heidi.

She remained in the Assistant Chief Operations Officer position for three years before in 2382 she was promoted to full Lieutenant and the position of Chief Operations Officer. It was a proud moment for Claudia and she was pleased that after just eight years into her commission she was a full Lieutenant and a department head on a very advanced starship such as the Endurance.

In 2384 Claudia was elevated to the position of Second Officer – a move that signified Captain Grundy’s trust in her. A year later she led an away team down to what was believed to be an uninhabited planet – although once they got there it turned out that it wasn’t. A group of scavengers took Claudia’s team hostage and demanded that Captain Grundy turned over the Endurance‘s supply of antimatter for their safe release.

It was a massive learning curve for Claudia who was now clearly on her way to her own command – being one rung away from the top of the ladder to get her own starship. For the next two years she built up a great relationship with Captain Grundy – who she had grown to see as a second father – who had encouraged her every step of the way. Claudia’s first test of her command skills came when in 2387 the Endurance was boarded by pirates whilst it was in a remote star system carrying out systems diagnostics and Captain Grundy was taken hostage. The pirates demanded that in exchange for Grundy they wanted antimatter and weapons – or they would kill him. Grundy ordered Claudia not to give in before the pirates disabled the Endurance‘s warp drive. After hastily repairing the warp drive Claudia and the Endurance found Grundy was being held at a facility on a remote moon in the Bajoran system.

After fooling the pirates to release Grundy by posing as their accomplices with a shuttle carrying a false warp signature the pirates were apprehended and turned over to the Bajoran authorities. After rescuing Grundy she was promoted to the rank of Commander for her efforts. Six months later in 2388 Captain Grundy decided it was time to retire – and Claudia decided that it was time to spread her wings and apply for her own command. It was bitter sweet however – as Claudia applied for a command of her own ship – she had to say goodbye to her mentor.

In July 2388 after a short break to spend time with her family Claudia assumed command of the brand new USS Vindex – a Sovereign-class starship assigned to the Fourth Fleet’s Task Force 9 in the Gamma Quadrant. Within three weeks of Claudia assuming command the Vindex had rescued the Renown, confronted a Consortium ship (the USS Bozeman) and destroyed their flagship (the USS Dark Horse). After the Vindex liberated the Renown from the nebula it was hiding in Claudia was promoted to Captain. However during the Battle of Starbase Unity she was badly injured by an exploding console on the main bridge. Claudia returned to full duty two days later to command Operation Adrestia – a successful plan to retake Gavara IV from The Consortium and allow Starfleet to retake Deep Space 11 and end The Consortium threat

After a Consortium mutiny on the Vindex Claudia along with her partner Rebecca and others were taken hostage and transported to Veloz Prime – an unoccupied planet in Cardassian space. After being liberated from the planet by the Vindex they returned to the Gamma Quadrant where the crew discovered a new planet later named Nova Mercia. It was on this planet that Claudia married her partner Rebecca with her close friend Paul Foster giving her away.

Shortly after their wedding Claudia and her wife decided to have baby. Claudia took maternity leave between October 2388 and April 2389 – handing over command of the Vindex to Captain Emily Jones.

At the end of her maternity leave Claudia was assigned to command the USS Kumari, although this was only a short term assignment whilst Captain Colburn took a leave of absence.