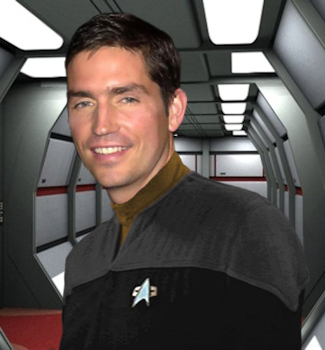 Alex has an open-minded and down to earth personality. In most day to day situations he is laid back and easy going with the occasional sarcastic streak He is known to keep his focus during crisis situations, portray strong leadership skills and a dedication to duty. The other side of this coin that Alex tends to put his work above his own well-being when it's crunch time. During crisis situation, he may appear cold and calculating. Sometimes he may seem impulsive in his actions. Alex hopes to climb the ranks and eventually become a command officer. A short term goal includes taking and passing the bridge officer's test. Off duty, Alex is known to enjoy a variety of hobbies, including waterpolo, holographic conversions of video games, 20th century automobiles and projectile firearms

Alex was born in 2362 in Atlanta, Georgia as the oldest child to Greg and Amelia Hyde. He spent most of his childhood in Georgia, moving to San Francisco at the age of 16 due to his father being transferred there.

Despite no one in his immediate family being in Starfleet, Alex’ curiosity about the galaxy and it’s mysteries were sparked at a young age. This is mainly due to his exposure to Starfleet and it’s staff. Both his parents have worked for the Federation Security Agency for many years.

It was in high school that Alex decided he wanted to see more of the galaxy, figuring there was always time to settle down and transfer to the civilian sector later in life. he applied to and got accepted into Starfleet Academy.

During his time at the Academy, Alex specialized in computer systems with additional certifications in Advanced Emergency Medical training and System Security. At the Academy Alex’ came to realize the diversity that existed within Starfleet, as he made friends across numerous species and learned from their cultures.

After graduation in 2384 he was assigned to the Norway Class USS Norway. Although his assignment could be classified as uneventfull, Alex never experienced his time there as dull.

Two years later, in 2386, Alex was reassigned to the USS Pharaoh, a Defiant class operating out of Starbase 23 that was mostly assigned to border protection and customs enforcement operations. Aboard the Pharaoh Alex served as Assistant Chief Engineering Officer as well as Computer Systems Specialist.

2387 saw a dramatic swing when the Hobus star went supernova. The Pharaoh was dispatched to escort the Olympic Class USS Nobel which was tasked with relief efforts within the affected territory.

At the request of the Nobel’s Captain, Alex was placed on the Nobel on detached duty as Acting Chief Engineering Officer. This continued until all Starfleet assets were ordered back to Federation space on October 1st, 2387. As a result of this, Alex was reassigned to the Pharaoh.

In early 2388 Alex’ younger sister Casey was killed in action alongside another Ensign aboard the USS Lexington. Alex returned to Earth to attend the funeral and filed for a 3 month LOA to come to terms with the situation.

After this, Alex felt the need to put some distance between himself and Earth. He filed a request to be transferred to Starfleet’s operations in the Gamma Quadrant.