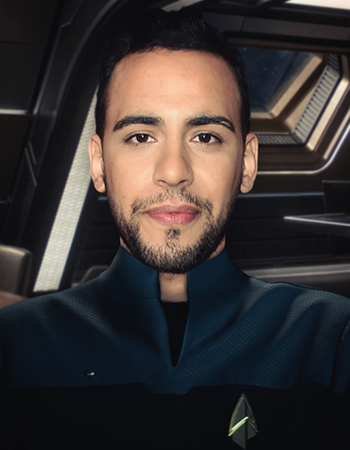 Ezra was diagnosed with autism at an early age, and as such often found it hard to make friends or socialize, and even as an adult is not always the most comfortable in social situations, but he works hard to make sure he's someone his friends can depend on. His behavioral traits often mislead people to think he has Vulcan blood in him, though he swears he's pure human, from his head to his toes. Though he excelled in school, at first he was worried that his autism would make it difficult for him to join the fleet, but he is determined to prove himself just as capable as anyone.

Family – Born on the Mars colony, Ezra is the fourth of five children. His father, Christopher, was a civilian mechanical engineer who worked at the Utopia Planetia shipyards, and was killed in the 2385 attack along with Ezra’s oldest brother, Miguel. Ezra’s mother, Mary, a schoolteacher on Mars, managed to escape the attack with Ezra and the other children. Carlos, the next brother, works as a test pilot. Elena, the oldest sister, is a journalist. Hannah, the youngest, is a student at Harvard. Ezra is the only Starfleet officer in the family. Ezra’s autism made it difficult to form relationships, so with the exception of a small handful of close friends, he focused on building his relationships with his mother and siblings instead, and today they are all very close.

Education – Ezra was seven years old when Mars was attacked, so he only went through elementary school on Mars, but he and his family settled on Earth after escaping the attack, so he finished his education there.

Decision to join Starfleet – Members of Ezra’s family had proudly served in Starfleet since its inception, despite protest from other relatives who didn’t like the way the organization operated. But when Ezra’s great-great-grandfather was killed in the destruction of the USS Edison during the battle of the binary stars, the loudest voices in the anti-Starfleet relatives decided that enough was enough and that the fleet was too dangerous. Following children and grandchildren were made to pursue “safer” civilian careers. That is, until Ezra came along. He insisted that he would never be happy or satisfied until he was given the opportunity to follow his passions and goals into space…and with the support of his mother and siblings, he became the first Gonzalez to join Starfleet in over 100 years.

Hobbies and interests – A common trait in autistics is a “special interest” or strong fixation on a particular type of item or subject. Ezra’s special interest is cultures and anthropology. Even as a child he was fascinated by the now-famous first contact stories from the adventures of Admirals Picard and Janeway and others, not to mention Admiral Archer, who met many of the Federation’s oldest friends and allies for the first time. He would wander the bridges of those famous museum ships, daydreaming and envisioning himself a part of those great moments in history, despite his social difficulties. From that time on, he devoted himself to making his dreams a reality, eventually working up the courage to apply to Starfleet Academy. Even when not on duty, he takes great pleasure in learning about the cultures of Earth’s past by watching movies.

Strengths and weaknesses – Autistics thrive on routine and a predictable schedule, and Ezra is no different, getting easily frustrated when his routine is disrupted or something unexpected is thrown in. He is a hard worker, but often focuses a little too much on his work and needs to be drawn out of his shell from time to time. Because of his difficulty in forming relationships, he often lacks confidence in trying to “make the first move” or reach out to people, but he is fiercely loyal and loving to the small number of friends he does have. Like most people on the spectrum, social cues don’t always come easily to Ezra, neither does humor most of the time, and he has been known to be rather blunt and at times will take things literally. But, if anything, these traits have helped him come a long way in being honest, loyal, and truthful with his coworkers and superior officers.