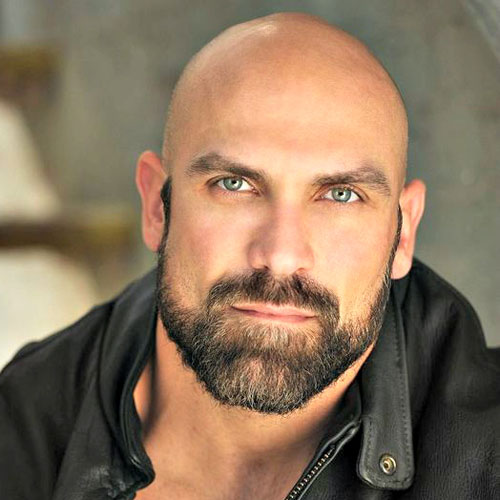 Alexandus is a stubborn, duty-bound man that has always sought to advance his ambitions through sheer determination and dedication. Never one to back down from a challenge, he aims to make his mark among those who he feels will have an impact in shaping the future of the galaxy.

The Rex family is a long line of public servants from Earth. Alexandus learned at an early age what it meant to help others and what it meant to serve his local community. As a teenager and going through school, a time when youths were trying to determine what they would do as a career, many were already determined to sign up for Starfleet. Such a future however, was not encouraged for the young man. Instead, the Rex family assumed that Alexandus would join the Medical Corps or something based solely on Terran soil. Secretly, without his family’s permission, Alexandus met with Starfleet officers and was able to secure a recommendation to Starfleet Academy. Joining Starfleet at 18 years of age, this was seen as a betrayal to the Rex family, who no longer spoke with him except on holidays.

Choosing to learn the skills of a tactical officer, Alexandus quickly learned not only how to manage weapons systems and navigation, but he was recommended by several professors to take the Command courses at Starfleet Academy after his required 4 years of study. Alexandus was apprehensive to apply himself even further due to a lack of confidence, but his studies in communications, navigation and tactics propelled him to the top of the candidacy list for the 2 year Command and Control program.

Graduating from Starfleet with his degree in Command secured, Ensign Rex’s first posting was as the Tactical Officer aboard the USS Grus, a training vessel used primarily for first year graduates.  The posting, while prestigious for the Ensign, made him eager for more dangerous assignments, as most young officers sought. Serving with little incident and being recommended for promotion after 2 years, Alexandus was promoted to Lieutenant Junior Grade and had a transfer granted to the USS Americana as a Flight Control Officer.

The USS Americana was an Akira Class Vessel, quickly becoming a favorite ship of the Lieutenant. One aspect of the ship that was still in service, although waning since the Dominion War, as an active Duty Roster of pilots and Peregrine Fighters. Due to this older configuration for an Akira Class, the assignments given to the crew of the Americana were usually ones of security, maintaining the peace through Federation shipping lanes and responding to threats of piracy in Federation Core worlds. Lieutenant Rex was taught the best practices for positioning the Akira Class to deploy fighters effectively and how to maneuver the vessel through asteroid fields, usually in pursuit of a rogue pirate or in one instance, a lost maquis raider that found itself on the receiving end of phaser cannon fire from a full compliment of Peregrines.

The Americana had positioned itself near the only safe exit of a local nebula and the fighters were sent in to corral the Maquis raider. Choosing not to directly engage the Akira Class vessel, the raider attempted to hide in the Nebula which had ion storms that made shields ineffective. Sending in two wings of Peregrine Fighters was the best solution, allowing the fighters to disable the engines of the Raider in a single strafing run. Soon afterwards, the Maquis turned themselves over to Starfleet, allowing their vessel to be towed back to a local Starbase. The crew of the Americana were lauded for their tactics, and were given additional praise for their restraint in not charging in after the Raider into the nebula, which may have spelled doom for the crew if a stray torpedo or phaser hit in the right spot.

Upon Alexandus’ promotion to a full Lieutenant, he requested a transfer of duty to his first assignment as Tactical officer. This was granted and Lieutenant Rex served with distinction for 4 years as the Tactical Officer, choosing to remain on the Americana. This assignment allowed Lieutenant Rex to learn even more thoroughly the weapon systems, shields and ability to coordinate fighters with an Akira Class vessel. Many among the crew thought that Lieutenant Rex may elect to serve his entire career on the vessel, treating it as his new, permanent home. During his tenure as Tactical Officer, Lieutenant Rex turned down transfers to other vessels 3 times, 1 of which came with a potential for promotion.

In 2394, the Americana was escorting 2 civilian transports loaded with refugees from a colony that failed and sought relocation. During the voyage, the small convoy was ambushed by Nausicaans who, they wouldn’t learn until afterwards, were hired as mercenaries to ambush the trade convoys in their sector of space. Caught by surprise, the targeting systems of the Americana were knocked out in a volley of fire, forcing Lieutenant Rex to have to aim and fire manually. Communications from the Americana ordered the freighters to evade, and one of the freighters was performing an evasive maneuver when Lieutenant Rex fired a full volley of torpedoes at the Nausicaan ship. This volley was 4 Quantum Torpedoes, 2 of which struck the aft of an evading freighter, causing its hull to breach and for a total of 18 civilians to be blasted out into open space. The Nausicaan ship was eventually destroyed, but a review of the encounter caused Lieutenant Alexandus to be reprimanded for his actions and his pending promotion was canceled. He did not come up for promotion again until his next review the following year. Captains that previously sought out Lieutenant Rex specifically now distanced themselves from him, not wanting an unreliable officer on their command staff.

In 2395, after a full year had passed since the civilian incident, Alexandus was finally awarded a promotion to Lieutenant Commander and was transferred to the USS Daedalus as the FIrst Officer. The Daedalus is a Rhode Island class vessel assigned to research of local phenomena in the Alpha Quadrant. The assignment was not one that was meant for any sort of front line action but more of scientific monitoring in widely regarded safe zones within the Federation. Alexandus knew that this was the penance he had to pay for his previous incident in 2394 and if this was the path he had to travel down, then he would take it. To him, this was his opportunity to learn the intricacies of command from a more executive level, working in close consort with the ship’s Captain, Captain Brian Montefort. The Captain and Lieutenant Commander Rex worked well together, as Rex took every opportunity to learn from his commanding officer. Montefort consistently tested Rex who passed the tests with flying colors, making sure to test his decision making skills when placed into hazardous situations, such as spatial anomaly encounters or running through mock combat scenarios. Montefort constantly told Rex, “We might not be on the front line of any wars, but we sure are going to conduct ourselves like we were.” This demand of professionalism was imprinted permanently on Rex, who would always try to live up to Captain Montefort’s example.