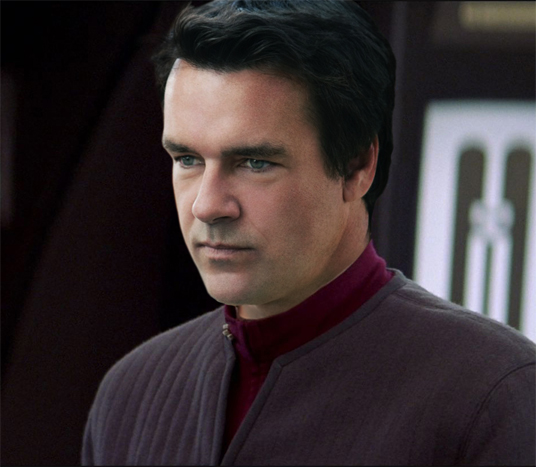 While serving aboard the USS Lancelot, Jon has achieved a great number of feats, and endured a number of incidences in his short career. Upon his reactivation as an Ensign after his return from Vulcan, Jon was involved in an attack that devastated the Starfleet Academy compound. No sooner had he beamed aboard the Lancelot, he was thrown into the mix, helping his fellows to apprehend a renegade starship before it completely destroyed Starfleet Headquarters.

Not long after this engagement, Jon found himself with the time to finish off his doctoral studies in Advanced Diplomatic Theory and Ambassadorial Studies, earning himself a PhD for his efforts and hard work in his field of study. This was augmented by a position and a rank promotion just after his arrival, which did much to bolster the young diplomat’s confidence and spirits.

The next mission he found himself engaged in also found the young diplomat in the heart of a civil war on an alien world. As part of a diplomatic envoy, Jon and several dozen other members of the crew took to the surface to investigate the bid by the Qualan government to join the Federation. While on the surface, things appeared in order, further investigation by Jon and a small team of his shipmates uncovered a large, corrupt system at work, and showed evidence that the Phethian people were in fact nothing more than slave labor with minimal rights.

Not long into the investigation, Jon found himself in the midst of a terrorist attack, along with the then Asst. Chief of Security, Cmdr. Reichmann. From there, the experiences on the surface spiraled ever downward until the moment an orbit weapons platform unleashed a volley of plasma energy into a town that Jon had been occupying. This even shattered the diplomat’s body, and nearly cost him his life. He was, however, kept alive by the valiant efforts of Dr. Ivan Kirov, at that time the Asst. Chief Medical Officer.

At the tail end of the war Jon, as well as the others of all the away missions, was rescued at the hands of the USS Freedom and the USS Republic, who arrived just hours after the USS Lancelot was sacrificed to quiet the orbit weapons platforms. He was given emergency medical attention, which included an unorthodox replacement of dozens of bones and vital organs.

After the mission, Jon was given a promotion, both in rank and position aboard the new USS Lancelot, where he serves as the Chief Diplomatic Officer. During the shakedown mission of the USS Lancelot, Jon has shown a remarkable propensity for getting himself into dangerous situations, both willingly and otherwise. His first encounter with danger came in the form of an away team mission to the planet Arcaria, where he had met a contact to determine the source and purpose for the smuggling of weapons into Federation controlled space. While on the surface, Bastin and a team of marines led by Lt. Corrigan and accompanied by Lt. JG Gunn, came under fire from a band of local vagabonds, who were later killed by hidden weapons embankments left by their contact.

With information secured, and only minor injuries to report, Jon and the rest of the Lancelot crew set off for Starbase 11, where they found themselves in the middle of a coup led by Breen extremists. During the encounter, the ship and crew engaged in two separate battles, one at a shipyard, which ended in the destruction of the facility, and the other ending in the rescue and securing of Starbase 11 and the surrounding space.

During the second encounter, Lt. Bastin, along with several other officers, help to hold of Breen invaders for a short while, before Lt. Bastin and a Security crewman were pinned down, and later shot down. Only through sheer luck did either manage to survive the encounter, the Security crewman much better off than Jon.

Not long after the encounter at Starbase 11, Lt. Bastin became romantically involved with then Lt. Blaze Silvera, whom he met at a small cantina after the mission had ended. Their relationship started off as a somewhat plutonic one, but somehow managed to evolve into something far more in only a week’s time. Their burgeoning romance was postponed rather abruptly when Lt. Bastin got a call from Starfleet Diplomatic Command to accompany a treaty mission to FGC-91866 along with Ambassador Narik and his three-person team.

Upon arrival, Lt. Bastin had been told that he would be taking over primary responsibility for the Ambassador and the mission at large, which neither Captain Ballentyne of the Bismarck nor Lt. Bastin agreed with, which lead to Lt. Bastin’s decision to disregard the orders in favor of pursuing the treaty preparation that would need to be made.

Not a week into the mission, and an unfortunate occurrence changed the nature of the mission, and perhaps the way Lt. Bastin viewed his chosen career. Ambassador Narik was killed, and at first, the suspect took the form of Diplomatic Aide Tina Foster, a newcomer to the team. This prompted Diplomatic Command, led by Adm. Henson, to relieve Lt. Bastin of his commission and appoint him as the new Ambassador to the Orn system, effectively putting him in the same danger as Ambassador Narik had been in before he was senselessly murdered. The investigation, however, yielded strange results.

Ms. Foster turned out to be Ms. Morgret, and she gave light to suspicious maneuverings by another member of the diplomatic party, Envoy Nelson. As the investigation wore on, more and more incidents were noted until finally, in a freak accident, Envoy Nelson was killed by an overloading phaser, but not before the internal sensors recorded a somewhat insane man confessing that he was in fact a murderer.

Those events took place as Ambassador Bastin was on the surface of Equilan, attending treaty negotiations that later yielded a signed treaty of protection, which ushered in a new member to the Federation family. This event, while bittersweet when weighed against the death of the former Ambassador, still gave Jon the ability to realize his greatest ambition, to help a new world join through his actions as a Diplomat.

Re-commissioned, Lieutenant Bastin bid farewell to the crew that had helped him for the weeks that led to the treaty signing, and returned once more to take up the office of Chief Diplomat aboard the USS Lancelot, a place he had missed greatly. His return to the Lancelot came at the tail end of the Lancelot’s operational lifetime, however he managed to receive his final promotion just before the vessel was destroyed during a classified operation in which members of the crew ‘hi-jacked’ the ship in order to attempt a rescue that came too late. Given the nature of the event in question, those involved were exonerated of any misconduct and quietly redeployed to other areas without incident.

From there, Lt. Commander Bastin was recalled to Earth, where he served as part of Starfleet’s Diplomatic Corps, giving his many years and technical expertise in the area of diplomacy a true run for their money.