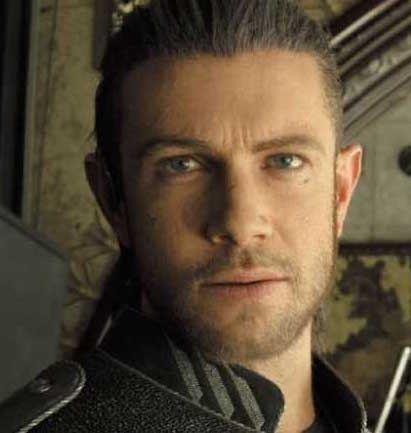 Captain of the USS Pandora, Nycolas Temple can be a surprisingly warm, occasionally deadly, but always deeply dedicated Commanding Officer. His career has seen many highs and lows, moments that have forever changed the person he became and turned him into the Captain he is today. He hasn't always made the right choices, and he's felt the consequences in return, but he will endeavour to do the right thing. He has managed to build an extended family onboard the Pandora - his crew is more than just a collection of officers sharing the same journey. They are kin and clan; his motivators and his dependants. The Pandora's tour of duty will be long, and he is determined to bring everyone home safe.

Born in Copenhagen, Earth in 2352, Nyx is the oldest child of Spencer and Brigitte Temple, and older brother to Magnus. His father was a Medical Officer in Starfleet, while his mother was a civilian politician and UFP leader. They grew up primarily in the artisan, historic Danish capital, though travelled extensively around Earth and to Betazed.

As his parents were often working, Nyx and Magnus would regularly spend time with his grandparents in Betazed, and the young boy enjoyed travelling across the Quadrant in starships, as well as seeing his warm, doting grandmother. She instilled upon the young boy a fun, compassionate outlook on life, as well as basic training for his empathic ability. She passed when Nyx was 14 and he vowed to always live up to her image.

After her death, his grandfather, a retired Rear Admiral, moved back to Earth to live in New Orleans, United States, while also taking care of Nyx’s cousin, Jesse. When Nyx and Magnus were sent to visit, the three boys enjoyed playing along the bayous and going on camping adventures, or “away missions” as Nyx liked to pretend they were. He always the instigator and leader, encouraging the Temple trio to climb higher, go further, and explore more.

While brother Magnus was more like their mother, Nyx knew he wanted to be a Starfleet officer like his grandfather. He loved hearing the Admiral’s war stories of fighting the Borg and the Gorn. This instilled into the young man a dedication to stand up against tyranny and protect the innocent, another lesson Nyx vowed to take with him into adulthood.

When Nyx neared the end of his secondary school, he was often lectured by his parental figures on which profession to pursue, but it was only ever Starfleet for him. After gaining acceptance into the Academy, he moved to San Francisco to begin his studies. His freshman year was spent with an undeclared major as he audited every subject he possibly could. Though he had strongly considered the Sciences, Nyx instead chose to major in Intelligence and Federation Security, wanting the action and adventure.

Now eager to get the most out of his time at the Academy, Nyx took elective studies in Advanced combat training, Field operations, and stellar cartography. He also joined the Academy fencing team, and competed in the annual Cadet Games. Nyx revelled in Academy life, managing to fit at least seven years of study and activity into just five, and he graduated in 2375. Prior to graduation, he gained a valuable internship at Starfleet Intelligence, which lead to being chosen for their Recruit training program.

Now training at Intel HQ, Nyx shadowed experienced Federation agents and learnt the ropes the hard way – in the field and on-mission. Though he was merely a recruit crewman, he enjoyed the thrill of investigating, hunting, and capturing the bad guys. He learnt the basics of criminal behaviour and the art of tactical operations.

He graduated from Intelligence and joined the USS Wellington as an Ensign Junior Grade Security Officer. He now wanted to serve on a Starfleet vessel and learn shipboard procedures and the Wellington experienced true front line service during the tail end of the Dominion War.

There was also a humanitarian aspect to the role, which touched Nyx personally and he learnt the true power of the Federation lied not in it’s weapons, but it’s benevolence. He became acquainted with a colony on Lucis V, where he soon found a second home in its beautiful garden city. While on Lucis, Nyx helped to repel an attack from a rogue Cardassian commander, personally protecting the colony’s leader, Mayor Fleuret. His heroic actions to help halt the incursion gained him the rank of Ensign, and the colony’s warm praise.

The developing officer was then appointed as Assistant Chief of Security on Starbase 15. However, he had developed a strong connection to Lucis V and he would often return there in the years that followed and he was always greeted as their adoptive son.

Furthering his career, Nyx was invited to join Starfleet Security as a specialist protection officer. Namely, this involved working as personal bodyguard for high-security personnel, as well as joining select covert missions to advance the defence of the Federation. Here, he gained a reputation for his advanced study of every mission parameter, often acting as the key intel source and tactical planner. He advanced in rank to the position of Lieutenant Junior Grade while positioned with the Federation Security Agency, now serving on a tactical strike team. He honed his combat skills and became a deadly fighter, known for his quick hands and strategic strikes.

Returning to Lucis during a break, Nyx met his future wife Emilie, the daughter of Mayor Fleuret. The two fell in love and were married just three months later, where Nyx was granted a position in the city’s Defence Council. Nyx chose to live on Lucis, and forestalled his Starfleet career in the hopes of making a new life on the planet. He became the Chief of Security and then a Minister for Defence on the colony, many believing he would one day gain the Mayoral position himself.

After a few years of blissful peace, Nyx was thrust back into active service to Starfleet when it became apparent that the colony would once again come under attack, but this time by a larger rogue Cardassian force looking to annex Lucis. Nyx led the defensive effort to protect the city and although they managed to evacuate most of the citizens, the city itself was destroyed and Mayor Fleuret was killed. The once beautiful Lucis was no more and the city was decimated in 2385.

Emilie was thankfully saved, though distraught at the loss of her father and her home. She and Nyx received some comfort however when she discovered that she was pregnant, and so the family chose to return to Earth. The survivors of the colony presented Nyx with a ceremonial jacket, complete with Lucis’ insignia and war medal, to commemorate him as “the guardian of the Lucii”. He returned to Starfleet as a Lieutenant and became Executive Officer of the USS Regis, having proven himself to be a capable leader, tactician, and most importantly a selfless protector of the innocent. Nyx and Emilie’s child, a daughter Katrine, was born nine months later, back in his first home in Denmark.

Seeking a new engagement and having proven himself as a leader, Nyx was granted captaincy of a new exploration and research vessel the USS Pandora in 2388. Though her mission was primarily scientific research and diplomatic engagement, Nyx was chosen to command the vessel due to his inexhaustible will to defend others and his sound, tactical mind.

Personally, Nyx jumped at the chance to explore a new region of the galaxy and discover new lifeforms and planets, wanting to get back to his old days of adventure and discovery.