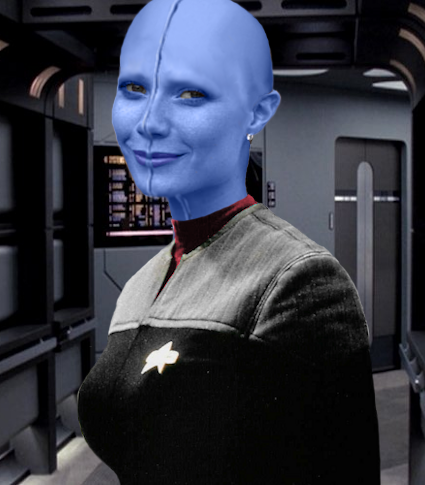 A very dedicated Starfleet Officer, Zelea’s background as a Starfleet Engineer has been very rewarding for the Bolian. She followed in all three of her parents footsteps as engineers and tinkerers and made one of her co-fathers very proud when her Commanding Officer offered her a promotion to Executive Officer after noticing her leadership skills.

Born to a trio of Bolian parents, aboard the USS California the blue skinned baby had a loving and nurturing infancy.  Her parents were a trio of Starfleet Officers who all served as engineers.

The young Bolian became a joy around the ship toddling along behind one or all of her parents when they were not on duty or facing an emergency situation.  Only it wouldn’t be long that she was the center of attention as her light blue skinned little brother came along.

As the two grew so did their parents love for each other and their children.  Dedicated Starfleet Officers who had advanced in rank, their parents loved their careers and were some of the best the Federation had to offer.

The family was lucky that they had always been stationed together.  That was until the oldest male of the trio was offered a position as an Executive Officer and accepted.  The next few years would be very hard on the Bolian family, but they also believed in what the Federation stood for and knew they would be reunited as soon as possible.

Zelea was finally reunited with her father permanently when the family was transferred to the Galaxy class USS Ronin, where her father served as Executive Officer.  The remainder of the trio were both stationed aboard the Ronin as engineers.  The young Zelea often spoke of attending Starfleet Academy and was very interested in starship systems and was fascinated by the warp core.

The next year Zelea departed from the Ronin and became Cadet Arlidd, enrolled at Starfleet Academy in basic studies.  Cadet Arlidd chose to major in engineering and decided to mostly focus on her studies.  She did make time for friends every now and then, but wanted to make sure she graduated with good marks.  She wanted to impress her parents and she thought good grades would do just that.

It wasn’t long before her brother would join her at the academy.  She helped him with some of his studies as he liked to goof off and then scramble everything together at the last minute.  Zelea sometimes felt like she had to look out for her younger brother, but at the same time he was looking out for her.  Nijon was on a security track and teaching his sister almost everything he was learning.  He made sure she could defend herself, rather it be hand to hand or with a Federation weapon.

It was a joyful day when Cadet Arlidd graduated from the academy.  Her three parents managed to attend and her brother was on his best behavior.  The following day Ensign Arlidd had already been assigned to her first starship.  With a tearful goodbye to her family the young Bolian boarded a transport that would rendezvous with the USS Stingray.  The Defiant class ship and her crew had seen its fair share of battle so far and after a refit and resupply was off to patrol several trade routes.

The Chief Engineer aboard the Stingray took Arlidd under his wing, and made the Ensign his damage control specialist within weeks of her arrival.  Of course both the Chief and the CO of the Stingray knew the Bolian parent trio and was asked to watch out for the young Arlidd.  However the Ensign managed to impress both her superiors on her own merit and became a valued member of the engineering team.

After a few years aboard the Stingray a position aboard the USS Calvin a newly commissioned Akira Class Battle Cruiser came  open and the Chief Engineer recommended the young Bolian for a promotion and transfer.  With in a week Zelea was Assistant Chief Engineer aboard the USS Calvin.  She worked very hard with her superior and managed to get twelve percent more power out of their engines.  She also worked with an operations team to reduce power fluctuations while using defensive and offensive systems.

Serving aboard the Calvin for several years Zelea was offered the Chief Engineer position, when her former mentor retired.  The crew of the Akira Class Battle Cruiser saw their fair share of conflict among the stars and continued to make efficiency upgrades to their vessel.

Working closely with the command staff of the Calvin and on a recommendation from her CO, Zelea went out for the command course at Starfleet Academy and passed with flying colors.  With her former CO’s recommendation, based on how she led the engineering team and several away missions, as well as the experience she gained as Second Officer aboard the Calvin, she was placed as Executive Officer aboard the USS Hera.  Zelea was rather surprised to be stationed on the Hera as it was a newer Nova class starship.

After a year and a half aboard the Hera the Bolian was transferred to the USS Carolina as Executive Officer.  She would serve aboard the Sovereign class starship for three years and gain the respect of her Commanding Officer and crew.  The Bolian did sustain an injury protecting her CO on what was supposed to be a diplomatic away mission.  After the injury she was ordered to take three months off to recover on Earth and actually got to spend a week with her brother.

As soon as her medical leave was completed Zelea asked to be put back on active duty and a week later (rank?) Arlidd received orders that she would be placed as Executive Officer aboard the USS Venture.