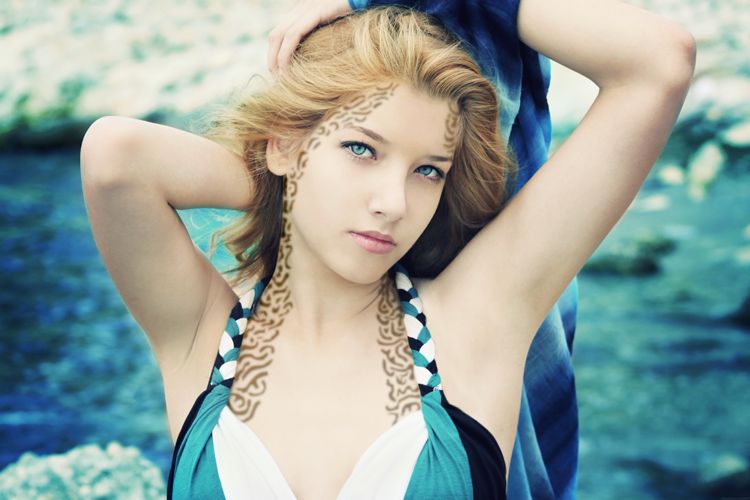 Sari Mirel is your average Trill, though she wouldn't be joined as what her dream was due to a condition that would result in death if joined, she made the best of things and decided to divulge in a Science degree. She would eventually work up in rank and become a Commanding Officer of the USS Relentless a Defiant-class Starship assigned to Task Force 9 and the Deneb Sector of space. Later on, she would become Command Adjutant to the Task Force Commander and reassigned to Devron Fleet Yards.

Sari Mirel was born on Trill on September 16, 2359, to Yuna Mirel and Rilian Kus, she was the second oldest of four children. Her father had been joined with the Kus symbiont shortly after she was born. Her older brother Mizra Mirel would apply to be joined but would be rejected by the Commission. Mizra didn’t mind much, as he decided to continue his studies into medicine and would become a Chief Medical Officer aboard the USS Norway. Her younger sister by two years would be the only sibling to become joined, Hazri would be joined to the Naahl symbiont about a year after graduating from the Academy.

Her younger brother Yamin Mirel had no desire to be joined or even join Starfleet, instead, he would join the local university for eight years studying medicine to become a doctor and eventually work with the Symbiosis Commission. Sari wanted to be joined but later would reveal that she wouldn’t be able to due to a condition that makes it impossible for the symbiont to hold and she could die from even the attempt of being joined.

Sari accepted this fact, she decided she wanted to join Starfleet to become a Biologist. She spent most nights studying, which she struggled at, at times but with hard work she would pass all her schooling and graduate towards the top of her class. She applied for Starfleet Academy after graduating from high school, she would take a few courses at the local university since she wouldn’t be able to start for another year as she graduated high school a year early.

Once she finished her courses, she was finally accepted to join Starfleet Academy. Packing up her things she went to Earth to begin her Starfleet Career.

Sari had arrived on Earth to begin her four-year study at the Academy, she decided to take up a few extra courses that would go along with her major in science. The first year she struggled academically but, she didn’t give up and would spend many sleepless nights studying. She found a few friends in her field that she formed a study group with, which helped her pass her classes in her first year there.

Her second year was a bit harder, she struggled but was able to pull up her grades. She enjoyed having the study groups it helped her understand things a bit better from other standpoints. Some times there would be lengthy debates on certain subjects but in the end, it helped her become a better student and later a better officer.

The remaining years became more of a challenge causing her to step further out of her comfort zone and really try different things to see how things worked or what didn’t work. She graduated from the Academy near the top of her class and was sent on her first assignment with a few of her classmates. She was happy to be able to work with some of her friends she made while at the Academy.

Sari was assigned to the USS Bohr a Nova-class starship as a Biologist with the rank of Ensign, she spent these years working in the science lab doing experiments, studying different biologies of plants. She found plants to be fascinating and she enjoyed trying to see what plants she could cross and which ones she couldn’t. Later on that year the ship was sent on a scientific study of a planet that had very interesting plant life on it. This gave Sari a chance to lead a study on the plants that were on the planet.

During this away mission, she didn’t realize it but there was a plant that had some kind of hallucinogenic effect, which affected the away team but herself. She had to think quickly on her feet to come up with a cure, working with the medical team. The away team had to be quarantined as to not hurt themselves or others and hopefully not pass it along to the rest of the crew while being monitored by the medical staff to see what kind of effects it would have on their bodies.

After working all night and most of the morning she was able to come up with an antidote that would counter the effects, because of her quick thinking and action that saved the away team she would be promoted to the rank of Lieutenant Junior Grade and sent to the USS Cavalier for her next assignment. Only one of her friends would join her, on her new assignment a fellow scientist.

Her next assignment would be the USS Cavalier a Steamrunner-class starship, where she would stay with her position as a Biologist. She continued her study of plant life, she also decided to start a study on microorganisms that affect plant life. She spent most of her time studying the different types and what plants they affected. She decided to go a bit deeper and actually infect a plant to see how it worked while studying ways to counter to effect to help stop the damage and reverse it for the plant to thrive again.

She would spend close to a year on this study, but she was successful at it and wrote a paper on her study which was passed to Starfleet’s Science board where she got recognized for something they weren’t able to achieve which awarded her a science award. Sari kept working on her studies while picking up some extra shifts working with other Science Officers.

Over the years she grew her knowledge and was a valuable asset to the crew of the Cavalier so when a position opened up on the USS Challenger as Science Officer she accepted.

Sari was promoted to the rank of Lieutenant and assigned as Science Officer aboard the USS Challenger a Galaxy-class starship, this gave her the chance to not only extend her knowledge as a biologist but go beyond that scope and do more work in the different aspects. She had an interest in Stellar Cartography. She began her study on the star system which was the vast majority of space they were traveling, she spent most of her time down in Astrometrics working on different things.

The USS Challenger was sent to a nebula that was still pretty unknown, Sari as well as other science officers began to study the nebula and learned that it could damage the shields of a vessel that might enter it, which they discovered while studying the nebula that an unknown ship had entered and was ultimately disabled, but not completely destroyed.

She was able to come up with a solution to get that ship out of there and to be able to study the ship, she was able to reconfigure the tractor beam to get a hold on the ship, without it affecting it or the Challenger. They were able to retrieve the ship, learning that it was a federation freighter, all passengers were lost. They were able to study the effects that the nebula had and come up with a solution that would counteract the nebula. This was passed onto Starfleet and would later be sent to all ships that might come in contact with the nebula.

In 2392, Sari for her work was given the position of Assistant Chief Science Officer. She would spend the next couple of years aboard the Challenger working on different things.

She was later promoted to the rank of Lieutenant Commander and assigned to the USS Cheyenne a Cheyenne-class Starship as their Chief Science Officer. She would also during this time take up the Command Course to be able to further her, as she one day wanted to become a Captain of her own science vessel. She would pass the command course and at times would be asked to take command of the ship when their command team was off on an away team.

This gave the valuable lessons that will stick with her. During one mission, an away team consisting of the Captain, Executive Officer, Engineering team as well as Security were on a plant dealing with a situation that required an engineering team. Sari was scanning the planet as what she normally would do but something was off. She had informed the Captain of what she was picking up and they were able to get back to the ship.

Later they learned that it was a trap, and if Sari hadn’t detected it the away team would have been killed. Because of that incident and her quick thinking she was promoted to the rank of Commander and was asked to join the USS Concord as Executive Officer, they felt that she would make a good Executive Officer. She gladly accepted the position, though she would miss the science department she felt this was her calling.

Sari was assigned to the USS Concord a Nebula-class ship that would ultimately be assigned to near Klingon, and Romulan space doing some standard patrol of the area. She would become an integral part of the crew, the Concord would receive a distress call from a Federation freighter that had been attacked near the region of space by some pirates looking to steal its cargo. The Concord had responded and with the quick thinking of Commander Mirel with a diversion tactic to lear the pirates away she was able to get the freighter out and ultimately save the crew and cargo of the freighter.

She would spend the next few years aboard the Concord until she was approved by the Captain about taking command of her own ship. She gladly accepted.

Sari would take over command of the USS Relentless a Defiant-class Starship that would be assigned to the Deneb Sector of space and Task Force 9. Where she would remain for a few years as Commanding Officer before being promoted again.

Note: Picture is from a google search for Trill pictures.