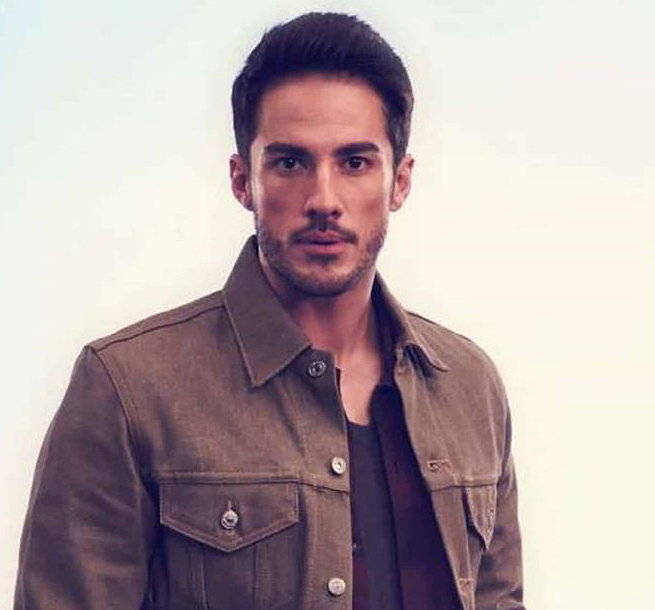 Lieutenant Commander James Mitchell is a Staff Judge Advocate in the Barzan Sector JAG Office. He is the younger brother of Lieutenant Alexander Mitchell of the Hypatia.

James was the third and final child born to Nathan and Judith Mitchell on March 16, 2364.  Their eldest son, Alexander, was eight while their only daughter, Pippa, was two when James was born.  Nathan and Judith were both Medical Officers serving at Starfleet Medical in San Francisco while they lived in Baltimore, Maryland.  Despite demanding careers, both parents were at great pains to make enough time to spend with their young family.

Due to the fact that there was only two years between them, James was and is closer to his sister than his much older brother.  The two were inseparable during their childhood, not just siblings but best friends.  Pippa began taking piano lessons when she turned eight and James, wanting to do whatever his sister did, began taking lessons soon after but where Pippa enjoyed this and excelled, James didn’t.  He had no aptitude for music and after a year of lessons, he gave up.  Instead he began playing soccer after school and found it much more to his liking.

The age difference between himself and Alexander didn’t prevent them from developing a close relationship, but he would always be much closer to Pippa.  James looked up to his older brother and it would be Alexander’s choice of a career in Starfleet that influenced James more than his parents own Starfleet careers.  It was Alexander who taught James to swim and the pair would go swimming several times a week before Alex went off to the Academy when he was 18.  Even then, Alex would still take his younger brother swimming at least every other week, more often when time allowed. It was only when Alex graduated in 2378 that their swimming trips ended altogether, though James would continue to go swimming with his father until he was old enough to visit the local swimming pool on his own.

James dated both boys and girls when he was in high school but his only relationship, which lasted nine and a half months, was with a boy.  He originally wanted to follow in his brother’s footsteps and become a Flight Control Officer in Starfleet but his aptitude for math simply wasn’t good enough for the subjects he needed to take to make that a reality so he set his sights on a legal career as a JAG Officer.

James’ classes began in the fall semester of 2382 and he struggled during that first semester.  He found himself to be not nearly organised enough with his workflows and he found the more formal way of life difficult to adjust to.  He considered leaving the Academy and taking a year out to really consider what he wanted to do with his life.  Ultimately, he decided to stick with it and, with the help of his friends, managed to become a lot more organised in his approach to his work.

While at the Academy, James continued to play soccer and made the Academy team during his second year.  In his third year he also joined the Academy amateur dramatic society and took part in many plays produced by the society.  It gave him an all new appreciation for the works of Shakespeare and Dickens.

James dated several people during his Academy years with his longest relationship being with a civilian who lived in San Francisco, Hailey Granger.  They met during his second year at a party held by a friend of James’ who introduced them.  In the weeks that followed they spent more and more time together until they eventually began dating.  The relationship ended in James’ final year because of the extra time he was spending on his studies.  Their breakup was amicable, and they remained in contact for several years after before slowly growing apart.

Upon graduating from the Academy in 2386, James was commissioned an Ensign and assigned to the Legal Affairs Office on Starbase 11.  As much as his four years at the Academy provided a theoretical grounding in the legal professional with a little practical experience, it was during his seven years on Starbase 11 that he truly learned what it was to be a Staff Judge Advocate in Starfleet.

Most of the cases he was assigned during his first two years were minor cases, the sort of thing that could be dealt with by agreeing a plea bargain with opposing counsel.  It wasn’t until he was promoted to Lieutenant Junior Grade in 2389 that he saw the inside of a courtroom, even though he was sitting second chair on those cases.  The experience allowed him not just a front row seat but to play an integral part in preparing a case for trial and, on occasion, he was allowed to perform some of the questioning during a Court Martial.

He finally sat first chair on a Court Martial six months after his promotion to Lieutenant in 2391.  Given the gravity of his job, whether defending or prosecuting, James took his work very seriously and had learned to approach each case with a meticulous eye for detail.  He relished the challenge of leading some of the more serious cases but felt that JAG HQ was where the biggest trials were taking place.  Towards the end of 2391, James requested a transfer to JAG HQ in San Francisco.  Two months later the answer came back: Request Approved.

Loss of the U.S.S. Hypatia

In 2389, James’ older brother was transferred to the Vesta-class U.S.S. Hypatia as her Chief Flight Control Officer.  The two brothers spoke a few times following Alex’s transfer.  A day after their last conversation, the U.S.S. Hypatia disappeared without a trace during a journey to Starbase K-17.  James took a leave of absence as soon as he was informed and returned to Earth to be with his family.

An extensive search of the area was conducted for the next 12 weeks with myriad Starfleet assets pulled into the search for the missing starship but to no avail.  No trace was ever found of her.  Starfleet officially declared her missing, presumed destroyed.

The Mitchell family were devastated.  James refused to believe that his older brother was dead.  He told anyone who would listen that there since there was no wreckage ever found that there was another explanation for the Hypatia’s disappearance.  His irrational insistence that his brother was still alive damaged some of his relationships; he wound up pushing his boyfriend at the time away and would struggle with personal relationships in the years since.

James arrived back on Earth in 2392 to take up his new billet of Staff Judge Advocate at JAG HQ.  Immediately he was thrown in at the deep end with sitting second chair on the defence of a Captain charged with negligence, loss of a Starfleet vessel and wilfully disobeying a superior commissioned officer.  It was a new challenge, and exactly the sort of challenge that he had been seeking.  He worked long hours on the case with the first chair, but the facts of the case were difficult to dispute.  The two tried to convince the Captain to take a plea deal to minimise prison time but he refused.  The Captain was dishonourably discharged and sentence to 15 years at a New Zealand Penal Colony.

For James, it was a bitter disappointment that his first case had been a loss, but it was a learning experience because he’d never worked on a case that it was obvious from the outset that he would, in all likelihood, lose.  His work ethic, however, did get him noticed.  For the next year he would continue to get assigned to cases as second chair until, finally, he was assigned as lead counsel for the prosecution in a Court Martial where the defendant was charged with murder.  This time he was successful in his duty and secured a guilty verdict in the Court Martial.

James continued to work hard over the next few years, burnishing his reputation for thoroughness and his dedicated work ethic.  This saw him promoted to Lieutenant Commander in 2396, though his personal life was rather less successful.  The disappearance of his brother, he would never refer to his brother as dead, and his refusal to accept that Alexander was gone held him back from developing meaningful relationships.

As hard as James worked, he also spent some of his downtime working on possible explanations for the disappearance of the Hypatia.  Every few months he would float a theory past a few of his friends serving at Starfleet Science or the Daystrom Institute, but they would dismiss him.  While the theories could well be solid, there was no evidence collected by sensor scans during the search for the Hypatia that would support any of them.