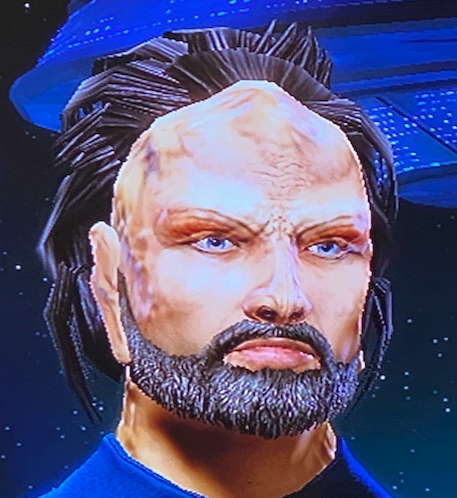 As Chief of Staff for Task Force 38 on Mithrar Anchorage in the Delta Quadrant, Brigham serves as a stalwart advisor to local leadership while overseeing the station's day-to-day Starfleet administration tasks. Brigham is also the primary attaché to the Turei, whom Starfleet has negotiated a partnership with to springboard its Gradin Belt theatre of operations.

Brigham is bright, warm, and perhaps a little overly enthusiastic at times. But these qualities help Brigham to bridge the gap between people, lowering their guard and guiding them towards the development of mutual trust. He’s often seen as the “life of the party” in social gatherings, always telling stories or cajoling stories from others. Owing to his Tamarian heritage, Brigham often falls into metaphor as means of communication. While he does, at times, use people, places, and events from Tamaria, Brigham’s half-human upbringing and deliberate quest for knowledge has led him to adopting human-based metaphors into his vocabulary. This has helped Brigham to serve as a bridge between his two peoples — serving to shed misunderstandings and provide clarity in otherwise challenging communications.

As a linguist and historian, Brigham has worked hard to serve as a Starfleet liaison between the Federation and Tamaria. But after over twenty years serving in this capacity — and having now taught many others on his world to successfully communicate with the Federation and its representatives — Brigham has set his sights on seeing more of the galaxy, hoping to delve into other cultures and develop a deep understanding of their inner workings. This has brought him to the Delta Quadrant, where he now serves as the Chief of Staff for Task Force 38.