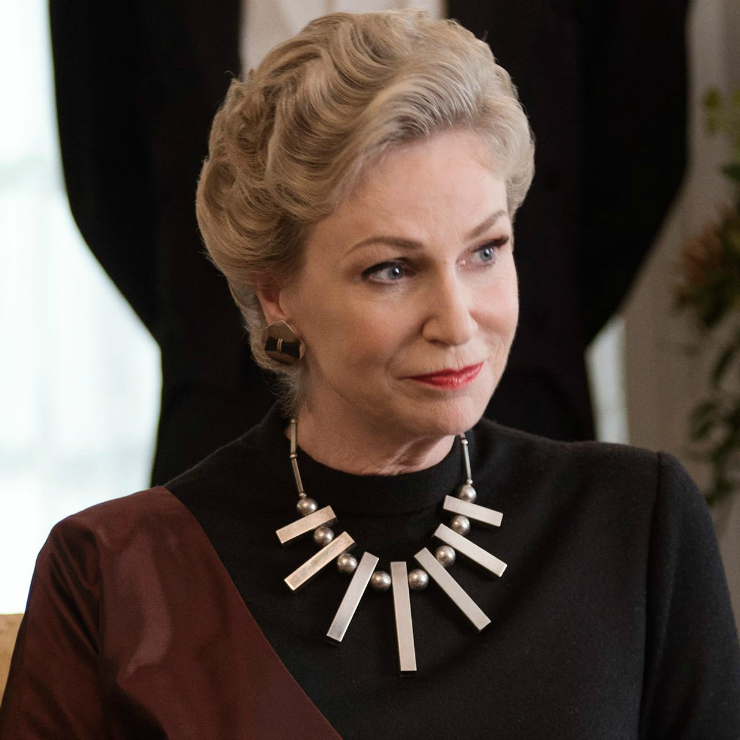 Aggressive and hard-charging, Aubrey Seagraves is a defense-focused officer who sees her primary purpose as a flag officer to be keeping another quadrant-wide conflict like the Dominion War from ever happening again. Brusque and acidic, she's not one to mince words or spare feelings, and she is a brutally-effective administrator. Her role as Fourth Fleet Operations Officer has her overseeing starship deployments and coordinating orders between the various task forces, on behalf of the Fleet Admiral.

Aubrey Seagraves was born on Mars in 2340 to a family that had lived on the Red Planet since the earliest settlements in the 21st century. Both of her parents worked in the orbiting Utopia Planitia shipyards and it was a family tradition that it was expected that she would enter as well, but the young Seagraves never saw herself staying on that backwater for her entire life, even if it was an incredibly important backwater. Instead, she saw the Starfleet vessels being built above her head and knew that one day she would leave on one of them to see the rest of the galaxy.

Seagraves was always tall for her age, hitting 1.8 meters by her sixteenth birthday, even with regular exposure to standard Earth gravity within the domed cities of Utopia Planitia, which helped her become a talented athlete. She preferred aggressive, full-contact sports like lacrosse, rugby, and parrises squares, which led to constant conflicts not only with her parents over her safety but with her teammates and classmates because of her over-competitive nature. This extended to her academics as well, as she managed to convince her school’s administration to let her take extra coursework virtually after her athletic practices and into the wee hours just to gain a further edge for what she knew would be the hardest challenge of her young life: the Starfleet Academy entrance examination.

Upon graduation from the academy, Seagraves was posted to the starship Bonaventure as a security officer. Her two-year cruise aboard this Ambassador-class heavy cruiser was relatively sedate, with her duties mainly involving protecting the many visiting dignitaries the Bonaventure was called upon to host during the course of her diplomatic missions.

In 2364, Seagraves was promoted to Lieutenant and assigned to the Cochrane, an Oberth-class vessel which was in use as a courier. As the Chief of Security, she enjoyed increased authority but missed the greater prestige of the Bonaventure. On numerous occasions, the Cochrane was used to transport flag officers, such as Rear Admiral Nora Satie in 2367, but generally, the Cochrane served as an all-purpose transport, moving personnel between assignments and delivering small pieces of cargo.

After four years on the Cochrane, Seagraves was again promoted and became Chief of Security aboard the starship Cygnus, a newly-commissioned Nebula-class heavy cruiser. With tensions brewing in the Alpha Quadrant, the Cygnus was deployed to trouble spots along the Cardassian and Klingon borders for much of her service on that ship. It was here that she met and fell in love with

Seagraves was tapped to serve as the next commanding officer of the Sovereign-class starship Yamato in early 2385. This amounted to a substantial promotion, entering into the élite sorority of those captains entrusted with Starfleet’s largest starships, so it was with great pride that she formally took command of the vessel at Utopia Planitia Fleet Yards on April 5th, 2385: First Contact Day. Her parents, wife, and two daughters had all transported aboard the ship to witness the transfer of command ceremony, but Seagraves had insisted that they return home so that she could take the Yamato out on maneuvers to test her new vessel’s abilities. This would become Seagrave’s only regret in her career, as the Synth attack got underway after the Yamato had moved out near Neptune to begin live-fire practice drills with unmanned drones.

After receiving word of the attack, the Yamato immediately returned to Mars, but the planet was already burning. Despite managing to evacuate thousands of engineers from the shipyard, Seagraves was too late to save her own family, who were among the 92,143 people to die during the attack. The Yamato participated in Starfleet’s response to the attack, ensuring the total destruction of every enemy vessel, with Seagraves personally overseeing the destruction of over a dozen defense satellites with active synthetic life signs even after their weapons had been disabled.

A rage set into Seagraves like nothing she had ever experienced before, as the attack was over so quickly that she had no opportunity to bury her feelings in work, and had gone from one of the crowning achievements of her career to having to arrange a memorial for her entire family within the span of hours. When the Federation Council convened an emergency session to consider a response, Seagraves traveled to Paris herself to testify in favor of a total ban on synthetic life forms across not only the Federation but at a level that would even override the Prime Directive. If their trust could be violated at home, she felt that they had no right to exist anywhere in the universe, and the speech she delivered was widely rebroadcast across the entire Federation.

While the Federation Council did decide to enact a ban on synthetic life, it did not extend as far as Seagraves had advocated for, notably excepting holograms (which could more easily be shackled through their software) and retaining the stance that the Federation would not intervene in the affairs of other cultures and so the ban would only apply within Federation space. Seagraves volunteered to personally head up a task force to supervise the dismantling of synths within the Federation, but instead she was ordered to take six months of supervised leave, just like many of the other officers who had actively participated in the response to Mars and were demonstrating signs of post-traumatic stress, during which she went through a full psychiatric evaluation and intensive therapy to help her cope with what she’d experienced.

While she had never exactly been a “people person,” she did not emerge from this mandatory leave restored as much as she was resigned. She had always served in roles where she was asked to defend the Federation, but as the captain of the Yamato, she would ensure that she could do everything in her power to prevent Starfleet from ever being caught with its pants down in the same way again. Originally, the Yamato had been scheduled to conduct exploratory missions in the Beta Quadrant, but Seagraves successfully lobbied for her ship to be instead sent on diplomatic show-the-flag patrols along the Klingon border.

Notably, Seagraves oversaw several joint Federation-Klingon missions against Orion Syndicate cells in 2386, which solidified her reputation as a commander who could handle complex and politically sensitive operations. With the experience she had gained commanding the Avenger along the Cardassian border and the Athena on deep space tactical missions, she was able to develop the Yamato into one of the most well-known and well-respected defensive commands in Starfleet.

Following the destruction of Romulus in 2387, the Yamato was redeployed to the area of space where Federation, Klingon, and Romulan space interact: the Triangle. Her mission there was to prevent Klingon opportunists from taking avantage of the unfolding chaos in Romulan space, using the reputation the ship had developed under Seagraves as much as its actual armaments to keep the peace.

The following year, Seagraves participated in several missions against the Sovereignty of Kahless, when rogue Klingon forces began to attack Federation systems along the border. While individually the Yamato was able to defeat several raids, the opposing forces were so numerous and so well-organized that the Federation inevitably lost ground. By 2390, Seagraves had been promoted to Fleet Captain and had a squadron of escorts and light cruisers backing the Yamato, which she brought to bear with the other components of Operation: Gatecrasher in 2391 to excise the Klingons from Federation space.

Following her success leading a squadron of her own, Seagraves was promoted to Commodore and assigned as the superintendent of the Starfleet Advanced Tactical School. While she initially fought to avoid a desk assignment, she accepted it on the condition that she would get to run the program with complete autonomy. During her four-year stint she was noted for requiring every single command-level candidate to undergo intensive physical and psychological training, which was far beyond the expected tactical training, to make sure that everyone who graduated from the Advanced Tactical School would understand what they were asking the men and women who served under them to do when they gave orders.

Following her time at Starfleet Tactical Command, Seagraves was promoted to Rear Admiral and took up command of Task Force 180, which was assigned to defensive duties near Betazed. Though she was offered the Yamato, Seagraves instead moved her flag to the smaller Resolute-class cruiser Susan B. Anthony, as she didn’t wish to waste an important starship just to transport her around. It was here that Seagraves started to realize how much of her career had been spent doing what Starfleet wished that it didn’t have to do: defend the Federation. All of her education and prior service experiences had led her to become an excellent tactical commander, but she knew that’s not what Starfleet was for, and so she started to advocate for a return to pre-Dominion War priorities, namely: exploration, which she saw as furthering the Federation’s defense far better than remaining isolated and ignorant about the wider galaxy.

In 2399, this advocacy resulted in a change of assignment, with Seagraves taking up the mantle of Chief of Operations for Starfleet’s Fourth Fleet, where she was able to take charge of a number of initiatives that would be Starfleet’s first vanguards in their return to exploration.