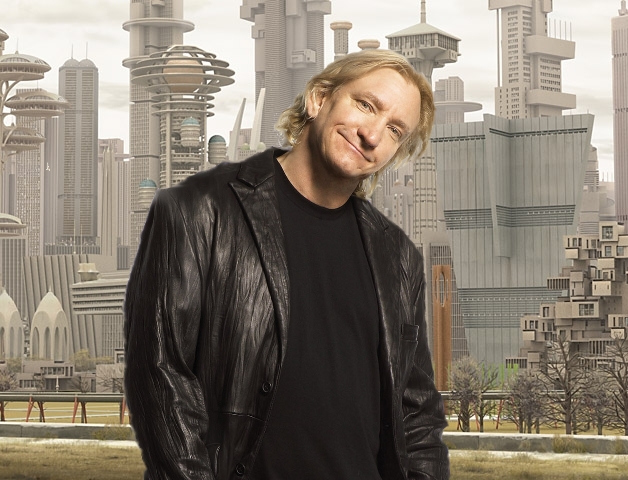 Often described as free spirited, Clay tends to seem as almost non-caring during stressful situations. Clay has been somewhat of an underachiever during his Starfleet career, owing to his clowning-around and musical antics, however he is dedicated to the pursuit of Starfleet representing the utopia the Federation is supposed to uphold. He was rather disheartened at the turn Starfleet and the Federation took after the destruction of Mars, which led to a loss in ambition and a flat-lined career. However, Clay does tend to still be upbeat, lighthearted, and humorous to his crew. This has led to some scorn from his superiors throughout his career in Starfleet His serious side tends comes out around friends and family, but it isn’t a side many see. He is generally quite an artistic, or “right brain” soul. Clay very much values the opinions of his crew and friends, and tries to be a friend and mentor they can turn to.

Born on November 20, 2329 in a small town on Sol IV (Mars), Clarence Teller had no aspirations to join Starfleet life. His father was deputy mayor and his mother was a stay-at-home mom, while he was an only child. At age 6, Clay started playing the guitar and piano after seeing a local band play a few times in a city park. His parents recognized his talent, and hired a formal teacher to further Clay’s understanding of music and classical musical theory. His skills quickly grew. During high school, Clay started growing his hair out and shifted his musical interests to the human rock and roll sound of the 1950’s and up. Joining a band of somewhat like minded individuals out of school, Clay’s aspirations were low, just like his grades. That didn’t amount to much, as they mostly played obscure, anchient However, his imagination become consumed with the galaxy beyond, and facing no other path into the stars, enlisted in Starfleet at age 20 in 2349. The recruiter found that when Clay applies himself, he is able to above and beyond the underachiever Clay emanates.

His first assignment saw Clay aboard a ship deployed to the Cardassian Border War. Despite being interested in the sciences, Teller was assigned as basic security. In 2350, while his ship was assigned to assist in evacuations of civilians from a colony, Clay met Stephanie Nicks. The two had a short fling before she was shipped to another colony. Having fallen quite hard for Stephanie, Clay attempted to track Stephanie down, but was unable to successfully, due largely to the chaos around that region at the time. After the border wars came to close, Clay dedicated studies to science, attempting to get out of being a lowly security guard. After a ship transfer, Clay found a mentor in the chief science officer of that vessel. Realizing Clay had potential, but showed the most promise in hands-on exercises, that officer recommended Clay attend a university to get a degree and become an bonafide officer within Starfleet.

In 2360, Clay enrolled in a university on Alpha Centauri. After a his first year there, he found Stephanie Nicks, who had also enrolled herself to get a second degree. The two entered a relationship shortly after. In 2365, Clay graduated with a degree in Advanced Particle Physics and became an ensign within Starfleet. Finally a science officer, Clay felt the call of exploration. However, his assignment was on a rather routine ship, and felt his skills weren’t being challenged. However that all changed in 2366, when Clay was a survivor of the Wolf 359 massacre at the hands of a single Borg cube. Putting life in perspective from a near-death experience, Clay proposed to Stephanie and the two got married shortly after in 2367. Cameron, Clay’s first child, was born in 2370. In 2373, on the cusp of the Dominion War, Clay sent Stephanie to Earth to raise their children with newborn daughter Rachelle.

The ship Clay served on didn’t see much action in the early parts of the Dominion War aside from the occasional Dominion Scout. However, as things began to grow worse for the Federation, his ship was assigned to defend inner Federation planets, and was involved in the battle in which the Dominion conquered Betazed. In a field promotion, Clay became an executive officer, showing skills as a somewhat capable leader. Shortly after his promotion, his vessel was destroyed by the Breen over Earth. Clay’s wife, Stephanie, gave Clay an ultimatum to retire and raise their children as a family. Clay and Stephanie mutually agreed on a divorce in 2374. After the war came to end, Clay applied for a command, and was granted one in the late 2370’s on the USS Viking. Frustrated with his superiors in giving him routine patrols, Clay pushed for something more exciting and was met with command of Hawkeye Island on Raeya 3 in the early 2380’s. He served on Hawkeye until 2385, after the synthetic uprising destroyed Mars (killing Clay’s parents in the process), and Starfleet decided to abandon Hawkeye and Raeya 3.

In 2399, Captain Teller, who had bounced in and out of reserve duty was asked to lead Starfleet to reactive the abandoned base on Hawkeye on Raeya after 14 years.