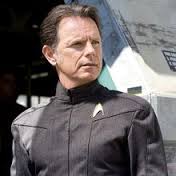 William is a considerate but analytical sort. He doesn't rush into action without considering his options especially when it effects others. Friendly and supportive, tending towards an open door policy on his commands to allow his crew feel they can be heard. While he may not have aced his Academy days he had developed a sturdy and time proven skill set for command. He's an accomplished diplomat and a capable tactician should the need arise, a patient when required. He does however know how to take a risk if absolutely called for one. He likes to see those around him succeed but he wont hold the hand and carry the weight to see them do it. Growth and development comes from within and hes a believer of it. William if pushed can be somewhat harsh with his actions, he will defend the weak

Born in May of 2345 he had an average childhood, as average as one might expect to have travelling from one orbital station to another in many systems. Home tutoring was his main compainion during his early years. Eventually his parents resettled on Earth where they began work on the new Seris 17 Habitation platform. His parents, one or the other were frequently away and many times he thought he had one parent. He thought himself a doll between them and second to the work they did.

When he was 15 he ran away from home, tired of being second to work, ignored by his parents and not given the attention or affection a boy his age needed from parents. He managed all of 13 hours, before he fell out of the tree he was hiding in breaking his leg and his back. A year of traction was his reward but the message was clearly received by his parents.

Things at home picked up steadily and as a result so too did his studies. His grades earned him a place in college and his parents were pleased with the improvement and were opening doors for him to follow them. Little did they know he had aspirations elsewhere, amongst the stars yes but on starships, not designing and building orbital stations.

After completing college he applied to Starfleet Academy, doing so behind the backs of his parents because he knew they wouldn’t approve. He was discovered when a friend also applied, he shared his secret but his friend didn’t keep it. William’s parents were furious at his actions and William moved out that day. His parents didn’t speak to him throughout his Academy years, they didn’t even attend his graduation.

As a result hes not spoken to them in almost 18 years. At first he found his had to deal with and tried to contact home often, often meeting with failure as they were off on some project away from home with nothing to indicate where they had gone or for how long. Time heals many wounds and William only looks forward now, not back. Accepting his parents made the choice he decided to not let it change him and he charged on with his career in