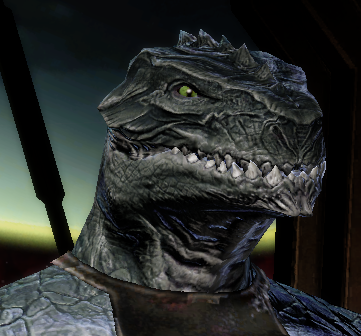 One of the few Gorn to ever deign to join Starfleet, Gar'rath is an oddity even to his own people. A contemplative creature, Gar'rath weighs his actions and their benefits far more calmly than many of his brethren do, his personality a stark contrast to his fierce appearance.

Hailing from Cestus III, Gar’rath encountered humanity early in his life. He, along with many of his brood, made frequent trips into the human held city near their birthplace, finding the differences in culture and behavior of mammals to be fascinating and bewildering. When Gar’rath came of age, he declared that he would join the mammals in their city, and forge a path among them, a declaration that was met with mixed emotions from his brood. Unphased by their insistence that such a life would be without meaning or purpose, Gar’rath set about integrating into the Federation style of life. His natural proclivity toward feats of arms and strength led him to be pointed toward the local garrison, which took him in and found that his talent for maintaining order simply by being in the area was nothing to scoff at. A short year spent there, however, taught the Gorn that he was not satisfied to simply stay in one place. The recommendation that he apply to the Cestus branch of Starfleet Academy sounded like just the salve to heal his woes.

Gar’rath joined the security program offered at the Academy, and it is in this arena that he proved to be an excellent student. His ability to pilot craft was also above average, but the Gorn cared little for sitting behind a console when there was something more physical to be done. Other subjects were lost on him, such as the sciences and the more complex tasks that the engineering field required. He could hold a tricorder and read the display, but that was about as far as his prowess with anything markedly cerebral ended. His ability to rationalize things, however, earned him a great deal of respect from many of his peers, most notably the Vulcans whom he went through the Academy with. Logical arguments and sound decision making gave him a reputation as being ‘civilized’, by the standards of most mammalian species, something most of them would have never dreamed of saying about a Gorn.

His graduation from the Academy saw him being posted to a Prometheus-class vessel that was assigned to various borders with some of the more uncooperative neighbors the Federation had to deal with. His time spent on the USS Hades gave the Gorn plenty of chances to prove that he was more than just a dangerous lizard… even if that fact did come in handy on several occasions. During his tenure, Gar’rath was promoted twice, both in rank and position, seeing him reach the rank of Lieutenant in five years. In that time, he had made a place for himself among the crew, and his sudden selection for command was a blow to the ship, even if it were a happy occasion. His Captain had submitted his name to a call for promotion worthy officers who could take command of older vessels to support missions that were ramping up all over the Federation and beyond. Though he had been very much worthy of such a nomination, Capt. Hines hadn’t expected that Starfleet would select the Gorn… an expectation that was proven to be misguided when word was sent to process his transfer.