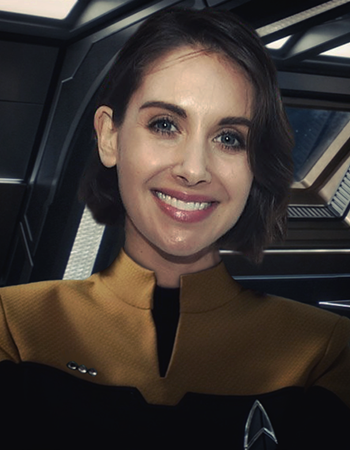 A brilliant and driven intelligence officer, Commander Lockhart has shown an unexpected talent for management that has advanced her career beyond merely that of an analyst. Despite difficulties in her personal life, she continues to be driven to excel.

Born on Alpha Centauri, Elizabeth Lockhart’s father is a professor of history while her mother has always been a high-flying officer in Starfleet Intelligence. This saw her and her younger brother mostly raised by Professor Orton Lockhart while their mother’s career took her away in their early childhood. A bright and happy child, Lizzie was doted on by Orton, who gave her a love of reading and learning, and inspired in her a desire to see a wider galaxy.

When Lizzie was eleven, her mother was given a post with the Palais de la Concorde in Paris, and the family relocated despite Orton’s dissatisfaction. This was where the distant affection between mother and daughter would take a more complicated turn, Anna Lockhart seeing a lot of promise in bright young Lizzie and trying to encourage her.

This ‘encouragement’, however, became setting huge expectations and exceptionally high standards in everything she did. Lizzie changed in her teenaged years from a keen, well-rounded student to an utterly driven young woman, desperately chasing her mother’s approval. She stopped wanting to follow her father’s footsteps and instead looked to follow her mother’s, applying for early entry to Starfleet Academy and accepted, attending at age 17. Unsurprisingly, she pursued a career in the Intelligence branch.

Graduating high in her class, Ensign Lockhart was posted as an analyst at Starbase 10, with a particular focus on the disruptive activity of the Romulan Star Empire that were soon revealed to have been caused by the pending supernova of the Romulus star. But within 13 months had come the synth attack on Mars. The synth ban led to major organizational changes in Starfleet Intelligence, for which Lockhart – as a promising and well-connected intelligence analyst with a specialty in computer systems – was reassigned to aid with.

Her excellent work might have put her on a fast-track to command and leadership within Starfleet Intelligence, but she racked up a blemish on her record in this time, engaging in an inappropriate relationship with her direct superior, one Commander Adam Kent. As a young officer, she received counselling and support, while Kent’s disciplinary consequences were much more severe, but it was considered a significant lapse in judgement by Lockhart. Her superiors concluded she should continue to gather experience before moving up too far.

Her promotion to full Lieutenant thus came as a matter of course more than anything else, and she was posted to Starbase 72 as an analyst on the Cardassian border. Here she began to gather more field experience on intelligence gathering, showing particular aptitude for surveillance. This was enough for her to be posted to Nimbus III as a station chief in 2392, with the norms of the old Romulan neutral zone effectively collapsed. It is likely her mother’s connections contributed to this posting, as this kind of independent command is considered an unofficial rite of passage for most high-level Intelligence directors.

Despite her limited leadership experience, Lockhart performed exceptionally well on Nimbus III. She showed an aptitude for networking among local power structures, relying upon the trade of appropriate information and resources to get what her unit needed. She had never proven to be good with people, but her work demanded she know exactly the needs, wants, and conflicts of factions, and she at last had an opportunity to apply that understanding. The end goal was a complete reform of the surveillance probes and systems within that region of the old neutral zone, where her predecessor had relied heavily on HUMINT contacts and informants. Lockhart’s justification was that the shift of power changed so rapidly in the region that such informants rapidly lost their value, but it has been noted that she also happened to institute reforms in accordance with her own expertise – a HUMINT specialist might have salvaged the lines of contact in the area.

But she was praised for this work, promoted in due course to Lieutenant Commander and assigned as Chief Intelligence Officer at Starbase 82. After long years of silence on a Gorn frontier, Commander Lockhart confirmed that the overhaul and updating of intelligence gathering in a region to be one of her specialties, assessing past methods and identifying gaps in incoming knowledge on a much wider basis than she could from Nimbus III, working closely with the task force command of the region.

This expertise in a variety of areas won her a particularly coveted position with her next posting, sent as a briefing officer to the Palais de la Concorde. While she primarily briefed senior officers and officials, she conducted her share of briefings for the President. A relatively short, two-year assignment is not unusual for this posting, but Lockhart expressed some dissatisfaction and surprise when transferred. The likelihood is that increasing tensions from rogue elements of the Klingon Empire has seen her, with little experience of the Klingons, elbowed out for a different specialist.

However, her skills in developing and rebuilding intelligence networks has won her a not-inauspicious assignment at Starbase 38, at the gateway to the Delta Quadrant and the increasingly high-profile Barzan Sector.