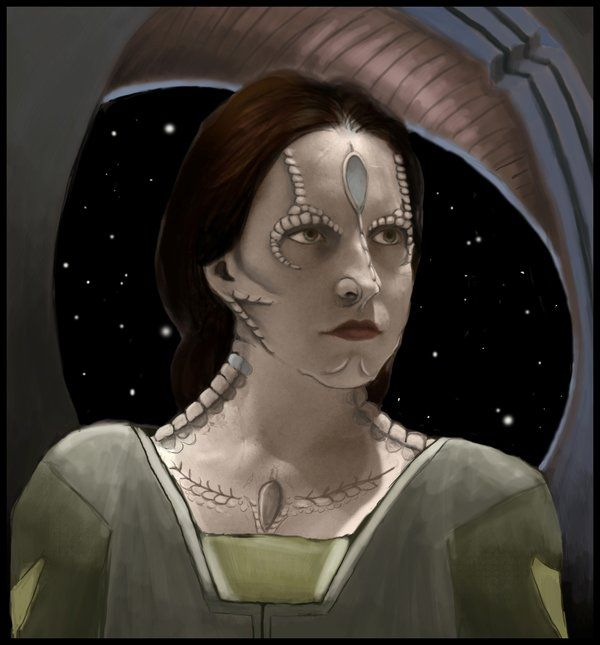 Kora Lenek was born on Cardassia Prime to a family that exemplified the values and ideals of the totalitarian Cardassian Union. Her parents instilled in her, early in life, a sense of duty and loyalty that they imagined would remain unbroken for the entirety of her life. Her education was regimented in the standard way as all other Cardassian children, her activities closely monitored, and her contacts with others outside the family rigidly controlled in such a way that it always led to exploitable connections later.

When she came of age, Kora enlisted in the Cardassian military and went through their training course at the Military Academy with the expectation of receiving the rank of Gil upon completion. This expectation proved to be a reality, more so by the manipulations of Kora’s family than personal merit, but that mattered little when she was sent to the Third Order for service.

The first few years of her service to the Cardassian military were routine, and Kora neither excelled nor did she utterly fail at any task given. It was during these years that the shadows of doubt about her place in the Cardassian political machine began to surface. Once the Dominion War started, however, the shadows started to solidify. While oppression was not something strange in Cardassian society, the way in which the Dominion carried out their ruthless policies, and their willingness to sacrifice the lives of her people with reckless abandon, coupled with the Cardassian Union’s willingness to oblige them went far beyond the norm, and descended straight toward madness.

Kora found that her sentiments were shared by a large number of the crew on the ship that she served on, lending itself to an easy decision when Legate Dumar made the call to resist Dominion oppression. Kora’s Gul ordered their ship to immediately begin hostilities with Dominion forces, and took the ship on a campaign that would eventually bring them to Cardassia just as Cardassian Central Command fell to Federation led forces.

In the aftermath of the War, Kora learned that both her parents had been killed, their staunch loyalty to a State that had betrayed them preventing them from seeing the truth behind the Dominion occupation. It was then that Kora made the choice to defect to the Federation, so that she might live in a manner that she felt was of far greater meaning.

As a Cardassian defector, Kora was subjected to a rather intensive debriefing by Starfleet personnel. The natural suspicion that came with such an act was not lost on the woman, and she endured the scrutiny with the same Cardassian spirit that had once carried her through her childhood. At the end of it all, Starfleet authorities came to the conclusion that her participation in the Cardassian Liberation Front far outweighed any action she had been asked to take part in prior, and she was allowed to apply for citizenship in the Federation, and subsequent to that, allowed to serve as a member of Starfleet in the Security branch.

Her first posting as a Lieutenant Junior Grade was aboard an outpost station near the Cardassian border with the Federation. While her presence wasn’t overtly unwanted, there were several members of the station population that didn’t take her being there as a sign of anything less than an affront to what they’d had to suffer and sacrifice for during the War. Kora, for her part, ignored their hostile attitudes, and while her methods for dealing with the more overt actions perpetrated against her weren’t always deemed ‘necessary’, in time she was able to squash the hatred toward her, at least, and secured a semblance of peace in the outpost.

Her time spent at the outpost, in Starfleet’s eyes, was a test of her motives, viability, and adaptability. When the time came to transfer her, the outpost’s commanding officer felt the need to personally apologize for her early treatment. It was revealed to her that he had been one of the people who had hoped she would fail in those early years, himself marred by prejudices of her people. To her commander’s surprise, Kora took the news in stride, acknowledging that some of her reactions had been tainted by the same prejudice instilled in her by her parents and the society she grew up in.

Her arrival to, as well as her stay with, her next assignment, a small Steamrunner-class vessel assigned to patrols and escort missions toward the galactic core region of the Federation, was far less hostile. The posting wasn’t glamourous, but her interactions with the security department, and later manning the tactical console on the bridge, were a positive experience for her and her shipmates. Their unease with her soon turned to respect, and farther toward the end of her stay aboard, it blossomed into affection. So much so that her Captain asked her to turn down her reassignment orders, even if he knew it wouldn’t help her career. The gesture, however, did not go unnoticed, with Kora promising that should the ship ever need a good Chief of Security, she’d gladly return.

Her next assignment as a full Lieutenant and the ship’s Assistant Security Chief, had already received word ahead of her about what the crew could expect, which tainted their view of her… in a different way. She reported in to smiling faces and friendly handshakes, a far cry from her first posting. Even Kora herself was shocked that she was more genial around people, her Cardassian snark only coming out occasionally, and most often being greeted with a laugh or a comeback rather than with hostility or suspicion.

Her stay aboard was extended after a tragic incident in which the Security Chief was killed during a mission that took the crew to an uncharted world. He’d been with an away team when the local wildlife became hostile, and his injuries got the better of him despite the best medical care the ship could provide. Lt. Lenek hadn’t been particularly close to the man, but his loss hit her rather hard, since his was the first open hand she’d taken when she arrived, the catalyst for others following suit.

At the end of her extended stay, Kora was given the opportunity to take the Bridge Officer’s exam, which she passed on the first try despite being told most people didn’t. It earned her a billet, and a promotion, as the Officer of the Watch aboard the USS Adelphi. Her sojourn to the ship happened just as the ship was heading for the Delta Quadrant, which meant that she hadn’t had much of an opportunity to get to know people before taking up the night watch duties.