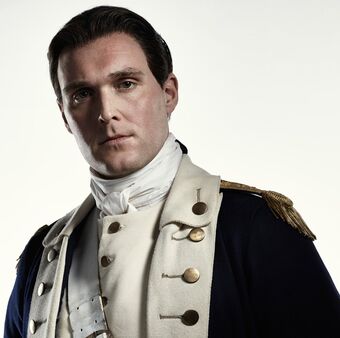 Nathaniel Warren is a farmer from Quincy, Massachusetts. A first generation American, Mr. Warren immigrated from England to Massachusetts in 1762 to restart his life. Aside from farming, Warren is a member of the Quincy militia and an active participant in all town meetings.

Nathaniel Henry Warren was born in London, England in 1740 to a merchant family. His father, Henry Warren, saw the economic opportunity of the Americas and decided to move the family across the Atlantic. To say the journey was difficult was an understatement – Nathaniel, just ten years old, loved to look over the railing. A few too many times, he almost fell overboard because of it. Seeing the marine life fascinated him, but when the HMS Alliance passed through a tropical storm, Nathaniel vowed to never set foot on a ship againArriving in Massachusetts Bay Colony, the Warren’s quickly settled into life around Boston. Having purchased a large home in Cambridge, the Warren family expanded. By the time Nathaniel had reached the age of 18, he had three younger brothers: Benjamin age 12, Edmund age 8, and Daniel age 5. While Henry Warren continued to operate a trading business, Nathaniel much rather preferred the solitude of farming and had been responsible for the maintaining the family farm. From raising apples to wheat and lettuces, Nathaniel finally had the green thumb that his neighbors seemed to possess. Luckily for him, his brother Benjamin was much more interested in finance and was following in his father’s footsteps.

Entering adulthood, Nathaniel found the love of his life, Mary, from the proud Ashley family of Watertown, met Nathaniel at the local market. She thought he was quiet handsome, and he thought she was the most beautiful woman in the world. Many said the stars aligned perfectly for them. After a short courting, their marriage was officiated by the local magistrate, and at age 25, with a small loan from his father, Nathaniel and his wife Mary purchased a small piece of land in Quincy, Massachusetts. Thus beginning their lives together.

Henry Warren, who prided himself for his rapidly expanding business, had migrated to America as a loyal British subject. He had proudly contributed to the King during the Seven Year’s War by shipping military supplies to and from the battlefields. But having lived in America, experienced the blatant disregard of American’s as second class citizens by the British Army, his opinions had quickly changed into a leading Patriot voice in Cambridge. Unlike in business, Nathaniel followed in his father’s footsteps here. As a member of the Quincy Town Meeting, he is a passionate supporter of the patriot cause, much to the grimace of his loyalist neighbors. There have been some minimal acts of retaliation against his farmland, but the vast majority of his fellow towns people are sympathizers like him.

Fulfilling his civic duty, Nathaniel Warren is a member of the Quincy Militia. Originally intended to protect the town from the savage natives, the militia’s new focus has been protecting the property of the towns people from the British. Rumors of redcoats unlawfully seizing their fellow citizens property near Boston has spread to the interior through the Committee of Correspondents. Ever since, the number of loyalists has dwindled. With the miles between Quincy and Boston, the British presence has been limited to sporadic patrols. But the town must be prepared for the day those patrols become more common.

The Warren Family farm is growing as a business. Having cultivated apples and wheat, the Warren Family farm is continuing to grow. Nathaniel has earned enough to hire local farm hands as well as purchase land from his neighbors (his farm now covers 15 acres). Luckily for him, Henry and Benjamin Warren help him with the distribution of his crop. Each day when he picks his head up to thanks God for giving him another day on this Earth, he doesn’t worry about the farm. He’s built it in to a well-run machine. What he does worry about is the unborn baby in Mary’s stomach and the impending war. But both of those are out of his hands.