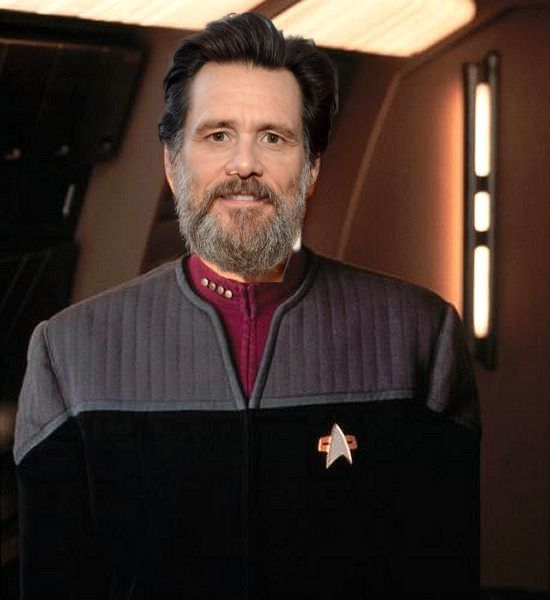 Nelson Buechner is a Federation Starfleet Commodore who currently serves as the Fourth Fleet's Task Force 72 Executive Officer. Buechner's career has been marked by a tactical and strategic operations savvy that translated into a successful decade in the captain's chair before transitioning into a task force senior staff role.

Nelson John Buechner was born aboard the USS Gideon on November 21, 2348 to parents John and Rebecca Buechner. He was the second-born to the couple, who would go on to have six children all told. His father, John, was a Starfleet JAG officer, a lieutenant at the time of his birth, and his mother a homemaker, though she had earned her own law degree with distinction.

The Buechner children were, from a young age, instilled with an overarching sense of duty and right and wrong. Their parents were, though tough, loving and emotionally intelligent, and engaged the boys from a young age with a love of learning, reading, and adventures. Annual Buechner vacations became the stuff of legends.

Though he deferred to his older brother Benjamin by birth-order, Nelson’s natural work-ethic and outspoken nature stood in stark contrast to Ben’s more sensitive, contemplative nature. A natural entertainer from birth, Nelson cultivated a love of making his siblings and friends laugh. He was a driven athlete and student who pushed himself to excel, though his performative mindset at school and home would haunt him later in life.

Nelson’s upbringing and desire for adventure, coupled with spending much of his childhood stationed aboard starships, lead him to apply to Starfleet Academy and be accepted. After graduating in the top percentile of his class, he shipped off to begin his own career, though overcast by the hefty shadow of his father who had risen to flag rank and was posted with JAG Command.

The Academy only stimulated Nelson’s innate competitiveness and drive, and he threw himself into academic and social life. His sharp mind and retention of information led him to early success. He especially appreciated his strategic and tactical courses, which became his route of specialized study as he progressed over the years.

Nelson’s fast pace was interrupted by a com call– his younger sibling, Shawn, had lost his bout with severe bipolar disorder. Drug use had spiked his symptoms and sense of paranoia, and he took his own life at 17. Nelson, at this time a junior at the academy, was rocked by the news. The news transformed him into a more reserved, melancholic person seemingly instantly.

A new caution characterized Nelson’s behavior and attitudes, especially when it came to command exercises. He stuck to the book, valued regulations, and found security in order. An outlet for his loss became further pouring himself into his work, which led him to another strong finish as he graduated the academy and was commissioned as an ensign.

Posted aboard the USS Thornton, Buechner’s perfectionism translated to ingenuity as a Junior Tactical Officer. He served with distinction during the Dominion War aboard the ship, but his career would be marked more by the pugnacious nurse he met aboard the cruiser and immediately began pursuing her.

Lieutenant Junior Grade Demi Robinson outranked and outwitted him. Her fiery way of being broke through the choleric remains of his personality, drawing his humor and liveliness again out of him. It was her friendship and love that pushed him to seek regular therapy to begin processing Shawn’s death. After a year and a half of dating and before Nelson was transferred off the Thornton, the two were engaged and quickly married in a large, happy San Diego wedding.

Nelson was promoted to a managerial role as Assistant Chief Tactical Officer aboard the Manhattan and received a commendation for overhauling the duty schedule to a more efficient three-shift system. After two years he took over the department. Not only was his career growing at a fast pace, but also his family– Demi gave birth to their first child, a daughter, in 2374, and their second, a son, in 2376.

In the wake of the Dominion War, and with the consultation of his father, now a Vice Admiral and Sector Judge Advocate, Nelson made a career move into Strategic Operations. His eye had long been set on the Captain’s Chair, and he felt a natural shift was moving from the tactical sphere into the bigger picture world of Command.

The lieutenant and his burgeoning family were posted to Deep Space 7, maintaining a Starfleet presence in the hazardous Inconnu Expanse. Though the tense nature of the assignment added some stress to the Buechners’ marriage and raising of their children, they continued to grow, welcoming their third child, Lindsay, in 2378. Nelson subsequently rose to lead the strategic operations division of the starbase, becoming a key voice in Task Force 72’s juggling of their many foes within the region.

After his transition to Command proved a fruitful one, Nelson requested assignment to a flagship to further network and develop his operational skills. The Buechners relocated to the USS Puerto Rico, where Nelson was to serve as Commodore Calvin Neikirk’s Chief of Strategic Operations and Second Officer. Neikirk and Buechner cultivated a strong relationship, and when the Puerto Rico‘s number two spot was vacated, Nelson rose to fill the executive officer position.

The Buechners’ fourth, and what Demi ominously vowed would be their last, child, Theodore, was born in 2381. Nelson added a full third pip to his collar in 2384, serving with distinction as Commodore Neikirk’s right hand and translating his high expectation, high personability leadership style into the role.

After four years of supporting the commodore, the USS Regent‘s command came available and Neikirk’s strong recommendation of the young commander saw him awarded the chair. Nelson, Demi, and the four Buechner children moved for the crowning achievement of his Starfleet career thus far. The same year also saw the retirement of his father, who finished a career with much renown among the admiralty and a legacy as a particularly formidable prosecutor.

Primarily the Regent served as a support and diplomatic vessel in relations with the Cardassians. Nelson’s strategic background and sharp interpersonal skills helped him build relationships both aboard the ship and in the ship’s dealings with the territorial race, putting in long hours of study to familiarize himself with their culture and history as best Starfleet’s records could prepare him.

After four years of service and a promotion to captain, Nelson was reassigned to the formidable USS Walsingham, a Galaxy-class vessel assigned to Task Force Hecate. Tasked with border defense and maintenance, the Walsingham also regularly served as a distress call first responder in the area surrounding Minos Korva. As the years progressed, Nelson and his family were endeared to the crew of the ship and the comfort of the Galaxy-class. Twice he requested extensions on his command of the vessel, serving for nine years, his longest duty posting.

As the 2390s progressed, Nelson became a regular at Starbase 72, developing strong relationships with Task Force Command and sharing his front-line knowledge and perspective on the region’s current events. After turnover in the senior staff, Nelson was elevated away from his beloved command but for a role he was well-suited for. Nelson was promoted to Fleet Captain and made the move into senior leadership, assuming the role of Task Force 72 Chief of Staff. Shortly thereafter he was raised to flag rank to fill the gap as the task force’s executive officer.