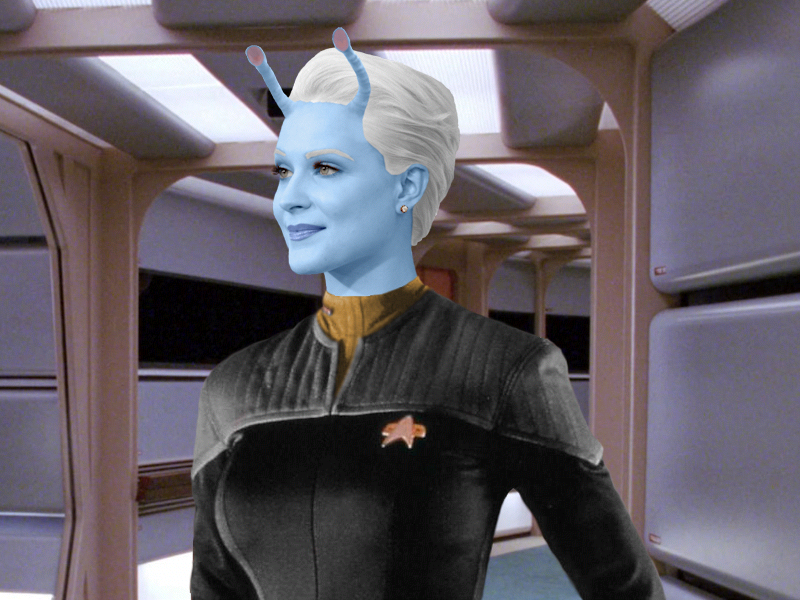 Theliv zh'Ashilav is an Operations Officer in the generation of Starfleet officers in a post-Romulan diaspora galaxy, born from parents that served or were directly affected by the events surrounding the Dominion War. Livvie, however, was quite rebellious in her youth, resulting in the abandonment of family traditions in serving in Starfleet as opposed to the Andorian Defense Forces, and the pursuit of a spirituality considered fringe and cultish by her lodge and clan. Spending time in different cultures' monasteries and holy places at any opportunity, Livvie's passion for faith-study is second only to her passion for Starfleet. She is skilled in materials science, starship power management, and transporter and replicator engineering principles.

When the Dominion began probing interior Federation worlds in 2374 in a search for soft targets, Shoran ch’Raviv was already recovering in an Andorian Defence Forces military hospital outside Lor’Vela City on Andor. A few months prior, his Shran-class battlecruiser, patrolling by the Andorian colony of Varesh Minor, was surprised by Jem’Hadar forces. If not for the rescue of nearby Starfleet cruisers, the battlecruiser would have been lost with all hands.

Shoran ch’Raviv and Mirest sh’Mani, one of his rehabilitation nurses, had fallen in love during his time at the facility. Once he had sufficiently acclimated to his prosthetics and was discharged from the hospital, the pair reached out to family friends to make a quad, and when Ranthel th’Ashilav – a biosynthetics doctor – and Havei zh’Ghorev – another ADF officer – had met the pair, it was decided they would all marry. Theliv was their first child.

Theliv’s childhood, and the childhood of her brothers and sisters, was stepped in the regimented life of an Andorian military family. Their lodge was located on a defense base on Andor, not far from where Shoran did his rehabilitation. Livvie was rebellious and nonconformist from a young age, and went through several different behavioral therapy centers effectively “gave up”. When Livvie entered secondary schooling, she gravitated towards physical sciences and “dynamic plasma manifold manipulation”, or DPMM, a Vulcan art form using magnetic containment and elaborate equations to create a form of living art. She accidentally blew up a school holosuite when trying to build a hybrid photonic manipulation system for DPMM; part of her “rehabilitation community service” was to spend a summer apprenticed to the agency’s team that rebuilt the holosuite.

Livvie was also fascinated with the Andorian religion of Umarinism, following the teaching of the prophet Umarin that prophesied Andoria would lead another species back to their passions once lost. Given the dubious history between Andorians and Vulcans, many believed this was the Vulcans, and so she dove into Vulcan exoanthropology. This turned into a whirlwind obsession which had trips to Earth, Bajor, Betazed and of course Vulcan. Realizing that Starfleet could be her vessel to follow her Umarinist beliefs and help other species maintain their cultural passions, she applied to and enrolled in Starfleet Academy. This finalized the rift between her and her parents, and to this day only corresponds with her birth mother, Havei, and only by letter.

Other than a few minor disciplinary actions at Starfleet Academy, Livvie excelled in plasma physics, dynamic magnetic resonance, and replicator/transporter science, and she graduated with a reasonable class ranking — enough to get an assignment as a power systems specialist aboard the Nebula-class USS Monitor. Her tinkering in the holosuite as a teenager paid off as the Monitor encountered a plasma storm ravaging a Federation colony. Through application of dynamic interference fields and concurrently simulating probabilities in the holodeck, she was able to deliver a solution that dissipated the field with minimal loss planetside.

After a short two year mission aboard the Monitor, its engineering pod was being swapped out for another mission profile, and Starfleet Command reassigned Livvie to the USS Apollo, an uprated Nova-class — officially dubbed Rhode Island-class — exploratory vessel. Livvie’s experience with the modular nature of the Nebula, combined with the Rhode Island’s more modern and modular space frame, made her an excellent choice for Operations Officer.