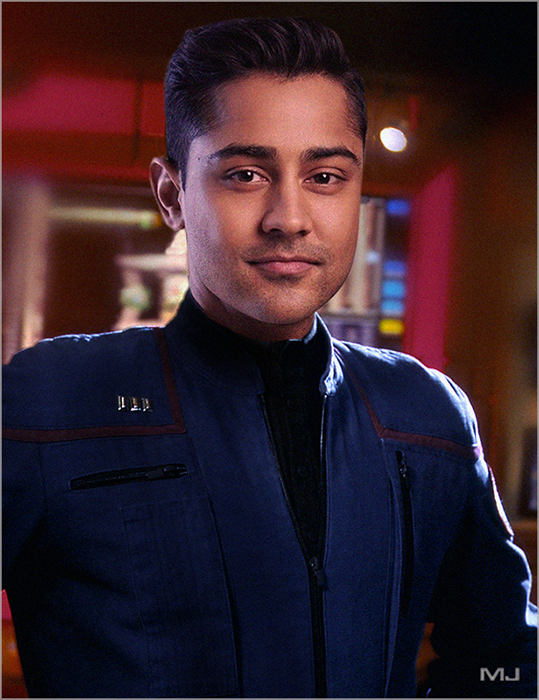 Rohan is immensely curious about the functional world. He is constantly absorbing new information and formulating innovative ideas to create new solutions of significance. His lifetime of experience tinkering and enhancing has encouraged him to think beyond the technical manuals and specifications; treating them as safety guidelines. A majority of his personal time is devoted to the abstract and theoretical, delegating mundane maintenance and details to subordinates. Rohan is laid-back, charming, and easy to get along. He is included in many social circles, with a small group of close knit friends which understand and accept his communicative style and personality.

Rohan was born July 18, 2128 five years after the creation of the European Hegemony.  He was the eldest of two siblings born to Herma and Sudhir Patel in the old city of Paris, France.  Sudhir was a civil engineer working with the Hegemony to rebuild infrastructure lost during WWIII.  As a child, Rohan was awed by his father’s creations which began most often with humble sketches on napkins.  Rohan was also influenced by his mother’s work as a doctor, researching genetics to develop cures for atrocities of war.  The patel children were afforded the best education the Hegemony could provide, sponsored by grants encouraging children to pursue needed professions in the new world.  Rohan grew up listening to stories from his grandparents who passed on the legacy of the family and instilled family values in the Patel children.

As a young child, Rohan surrounded himself with various household items which he would combine with blocks, toys, and imagination.  As he grew, his interests evolved beyond building, developing a knack for “investigation” by performing “autopsies” on various household appliances.  With guidance from his father, Rohan began repairing broken fixtures at home and school.  Encouraged by his father and teachers to expand his knowledge base, Rohan was introduced to electronics.  Rohan excelled in his studies, dabbling in programming, electronics, and propulsion; restoring several “Old Earth” vehicles currently housed in museums.

Rohan’s secondary education was hijacked by the development of an engine that could break warp 2.  Everybody was captivated by the news.  Previous talk of travelling the stars was becoming a reality.  Understanding the basic mechanics, Rohan became enthralled with pushing out beyond the Sol Sector.  Senior year was the most difficult as Rohan was flooded with college, universites, United Earth Military, and private sector research and engineering firms, and most importantly Starfleet.  Rohan debated on whether he should attend college or join the formalized Starfleet Training Command, where he could be up, close, and personal with the propulsion engines that could take him across the universe.

Rohan signed up with the Starfleet Recruiter, who had promised him admission based on United Earth Services Vocational Aptitude Battery (UESVAB) scores.  Although a sure thing, the recruiter forewarned Rohan about the physical fitness requirement and basic fitness at STC.  Rohan utilized his engineering skills to refurbish an old bicycle and connected with the school’s physical education instructor to get within regulation standards.

Rohan arrived on STC campus in August of 2145 with a new class of cadets beginning their training.  He was completely and utterly enthralled by the structure and atmosphere STC offered.  Although some complained about military life, Rohan thrived on the routine life…except for the drills and exercise requirements.  The morale and camaraderie between staff, faculty, and students was a catalyst for blossoming into “the well rounded young man” his parents always talked about.

The graduating class of 2149 received a special treat as they observed the foundation being laid for the experimental Warp 5 engine.  Rohan downloaded any specifications, blueprints, and unclassified information that was available.  Achieving warp five would put humanity within range of Vulcan technology; and Rohan wouldn’t argue with being one of the first to break Vulcan records.  Fueled with zeal, Rohan wanted nothing more than to get to the stars.  However, aware that competition for “space slots” was high, Rohan applied for planet side positions to gain further experience and first and knowledge for the theory discussed in classes.

Rohan was informed that requesting planet side assignments were given priority over the vast number of cadets and “star trekkers” which immediately applied for ship duty.  Rohan was immediately accepted and assigned to a team continuing work on the transporters.  Starfleet’s goal was to have them polished for streamline movement of equipment and materials.  Rohan was shocked at how many containers never ‘re-materialized’ over the course of one year.  The second year of assignment was spent modulating, upgrading, and finalizing weapons, sensors, and other systems which were never problematic or life threatening.

Due to unprecedented circumstances, involving Klingons, NX-01 was forced to leave spacedock early.  As a result many of the finishing touches Rohan and his team were working on, remained in the depot.  Rohan and his team watched the video feeds as Enterprise departed for a confidential and classified mission of urgency.  Dumbfounded by the opportunity to set foot on the newest experimental ship he had seen in infancy, Rohan requested an assignment in space.

Rohan was initially embarrassed about his posting to the SS Eberwalde, a Ganges class vessel which patrolled the Sol sector.  These ships were once the pride of the United Earth Space Probe Agency, but were now known as the “vultures” of the fleet.  Six months into the assignment, Rohan realized the wealth of information and knowledge both the crew and the ship had to offer.  The crew of these ancient protectors were “jack of all trades,” familiar with patching and getting creative to solve unexpected dilemmas.  Rohan committed to another year, faithfully standing watch during the decommissioning ceremony, shortly after the Xindi attack on Earth.

Rohan’s request for ship duty was granted once again, this time on an upgraded Intrepid class design.  Having been responsible for upgrading the Eberswalde’s warp 3 engine, Rohan was already familiar with the strengths and weaknesses of the engine.  However, the Intrepid offered him the privilege of sound structural integrity from which to master the engine in peace.  This was also Rohan’s formal introduction to leadership.  The Eberswalde functioned like a group of survivors; the Intrepid was Starfleet formal.  He had no idea that two years in, he would be running the department.