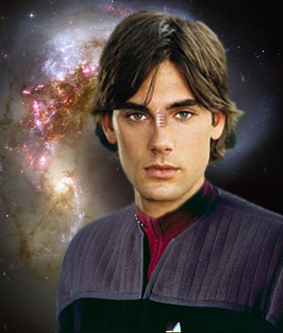 Javin was born on Bajor exactly 18 years before the Cardassian withdrawal from Bajor. Growing up in D’Cor province, the Javin family, known as exceptional farmers, were forced to work in numerous labor camps throughout the region. Like many of his fellow Bajorans, Javin lost family. The biggest blow came when his father died during a resistance mission. It came as no surprise that Javin joined the Frola Resistance cell, following in his father’s footsteps.

Being a resistance fighter, Javin was a passionate advocate for strong and independent Bajor. When the Cardassian withdrawal came, Javin volunteered with the Bajoran Militia. His career spanned just two years before he left his home world, bound for Starfleet Academy.

Javin was surprised at the relatively quick nature in which his application to Starfleet was approved. He assumed that the Federation was pre-planning for the day when Bajor would join the Federation and having a large population of Bajoran Starfleet Officers would help with any integration of forces. Nevertheless, when he arrived at the Academy, he immediately experienced the diversity of the capital. Everywhere he looked, there were people from different places – Vulcans, Bolians, Betazoids, Andorians, Klingons, were all around him. Javin fully enjoyed his time at the Academy; he excelled in his courses, made lifelong friendships, and found his passion: the Security/Tactical Department.

Assigned as a Security Officer aboard the USS Monitor, Javin early Starfleet experience can be described in one word: conflict. Shortly after graduation, the Monitor participated in the Second Borg attack on Earth. Working through a crisis as a junior officer, he was assigned to the torpedo tubes, ensuring they did not fail. Luckily, with the Task Force under the command of Captain Jean-Luc Picard, they were able to repel the attack, even if it took some minor time travel.

Shortly after the Borg invasion, life throughout the Federation changed: Cardassia joined the Dominion. Initially, the Monitor was assigned to the front lines, but being an aging Excelsior Class starship, the ship was damaged beyond repair in the first engagement to destroy the Torros III shipyards. From that point on, Javin was on the front lines of the conflict. From trench warfare, to hand-to-hand combat, to jumping through the ranks, by the end of the Dominion War, Javin Kile was a full Lieutenant and the Chief of Security on the USS Tennessee.

With the Dominion War in the past, Javin set a goal to be in command of a Starship within the next 10 years. He spent an additional five years aboard the Tennessee, during which he would be promoted to Lt. Commander and serving in the dual position of Second Officer. This first step into command changed his outlook on his career. At the close of 2380, Javin Kile was on a shuttle headed back to the Academy to complete Command School.

For the next year, Javin and his classmates, learned the intricacies of Command. He expanded his knowledge to include more than the Security/Tactical/Intelligence departments. He didn’t realize how thrilling it was to pilot a Starship or how liberating it was to make something broken functional again. Commander Javin graduated from Command School in the top 10% of his class was assigned to the USS Cygnus as their First Officer.

Experiencing Starship Command was a challenge, and while the Cygnus was assigned to Deep Space exploration, Javin learned what it took to be a leader with Starfleet. He mentored his fellow officers, pushing them to grow personally and professionally. Most of all, Javin appreciated the leadership of Captain Jessica Horizon who took him under her wing, showing him the ropes of starship command. When Captain Horizon was injured during a First Contact mission, Javin would serve as the Acting Captain of the Cygnus for three months. Having a taste of the center chair was a tease. He knew he wanted a ship of his own. When it was discovered that the Romulan Star would supernova, Javin immediately volunteered to assist in the relief efforts, hoping his record would earn him a Command, even temporarily.

While enroute to Mars to assist in the construction of the relief fleet, the synthetic workers on Mars rebelled. In their swift, but precise attack, the synthetics destroyed the relief fleet, and the Utopia Planetia ship yards. When his runabout arrived, he could see the smoke filling the atmosphere from the damage inflicked. Instead of taking command of his own vessel, Commander Javin was transferred to the Mars relief effort. He was surprised by the announcement of Admiral Picard’s resignation, but wasn’t surprised after Starfleet cancelled any relief efforts for the Romulans.

Commander Javin would remain on Mars, rebuilding Starfleet infrastructure for an additional year before he took Command of the USS Liberty. With the Romulan’s in tatters after the destruction of their homeworld, the Alpha Quadrant was relatively peaceful. Starfleet decided to refocus their efforts on exploration. When the center chair of the USS Liberty, a Galaxy Class starship, Commander Javin was promoted to Captain. With the Dominion remaining within their borders, the Gamma Quadrant represented a new frontier, and the USS Liberty was ordered to explore it.

In a rather unexpected meeting during a rare stop over at Earth, Captain Javin was approached by the Academy Commandant to become an Instructor at Command School. Thinking of great teachers of the past, including Captain Spock, and the impact he could have on the future leaders of the Federation, Javin accepted the lateral move. Originally, he joined the Faculty of Command School. With the increased demand for education throughout Starfleet, the Academy established a satelite Academy in each of their fleets. Captain Javin was reassigned to the 4th Fleet as their Vice Commandant – a position he serves in to this day.