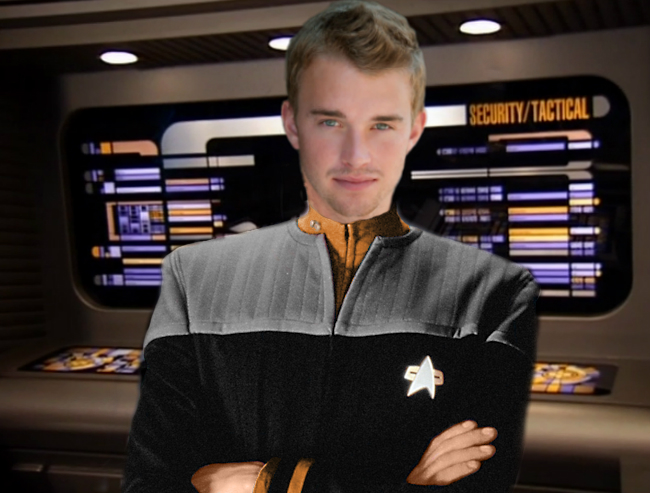 Assigned USS Adelphi as Second Officer and Chief of Operations

Jason grew up in an outer laying suburban to Los Angeles, he lived there with his immediate family until the age of 17 when he left home to join Star fleet, from an early age Jason knew he wanted to join Star fleet, his father a then Senior Chief in Starfleet pushed him to do better in school and took him on trips to see the ships and enjoyable things Star fleet offered.

Early on in life Jason took interest in Martial arts he went on to study Akido, Karate and Krava Maga. Around this time he also became interested in History and took to the books to learn more and more about history. He moderately advanced in his Martial arts studies, however he rapidly advanced in history studies.

During his teenage years he continued with his Martial arts studies and became fascinated with 20th Century fencing and Chess. Fencing turned out to become another passion of Jason’s although he did not have the skill needed to advance past average, chess turned into a hobby that he would play to learn about other people and how they worked. His studies during this time started to fall. The day of his 18th birthday Jason’s Father took him to a recruiting depot and signed him up for Star fleet academy. Due to his previous grades in school it was only because of his fathers friends that he was accepted. With little more then his travel bag and a few cloths Jason headed to his the rest of his life.

At Star fleet academy Jason’s first year was interrupted by messages from his mother requesting he came home. Taking an emergency leave of absence from Star fleet Academy he went home to find his Half-sister had gotten pregnant by a local thief. Her life not going in a good direction with illegal drug and alcohol abuse after she gave birth to a underweight baby boy Jason was able to convince her to let him adopt Alex and take him as his own son. Jason continued with his general studies with his new son staying with his mother until he finished the academy, during his third year he applied to the command school. He was not able to fully excel in his class, but did pass the command school with a secondary in Security/Tactical.

Jason was then assigned to U.S.S Exeter as a security officer. His first posting wasn’t what he thought it would be especially with his Alex finally living with him, but he made it work and was able to preform above his department heads expectations. After a year on board Exeter Jason found his rhythm on board ship and was able to acquire a commendation from the Executive officer for promotion and the position of Asst. Chief of Security. With a promotion to Lieutenant Junior Jason continued to gain recognition from his superiors and earned himself another commendation.

Gaining his third commendation Jason was transferred to a small outpost on the Cardassian DMZ as the Asst. Security Chief to the colony. Jason and Alex, who were now 22 and 5 respectively enjoyed the small posting as it was on a planet with more then just the smallest ship to walk around or the same boring ship designs to look at, both father and son enjoyed being able to walk around together and into the hills. It was at this time Jason received news of his fathers passing and was able to secure passage and leave back to earth for the funeral.

While on Earth Jason was ordered to Star fleet HQ where he received his newest posting to the Academy. He was assigned as the Adjutant to the Academy staff, While posted at the Academy Alex started following his this Jason’s footsteps and started taking martial arts classes but instead of history began to question more about the body. Jason on a hunch started to give his son more and more things involving the medical field and was happy to note that Alex took more and more to them. Around this time Jason received news of his mothers death. Already on Earth the trip was small but still sad. Both Father and Son began to bond more after this funeral.

Jason now 28 and Alex now 10 having served at Star fleet Academy for over 4 years felt it was time to try something new. With Jason’s ambition for promotion and Alex wanting adventure the two filled for transfer to a ship. Captain Lalor took him on board the U.S.S Elysium as the Asst. Chief of Security. Jason had gone on first to get everything settled down and then he would bring Alex aboard but before he was even assigned permanent quarters the senior staff were taken prisoner by Romulans. As the acting Chief of Security he took part and lead the ships security forces in retrieving the senior officers. Due to his role in the recovery efforts he was promoted to Lt. Commander and given the position of Chief of Security when the previous Chief retired after being imprisoned by Romulans. A year later with the departure of Elysium on a new mission Jason and Alex were returned to earth awaiting their next assignment.