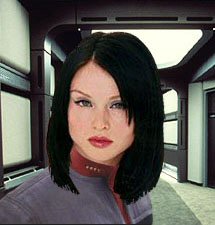 Presently serving as Commanding Officer of the Elysion class starship Proteus within Task Force 93. Captain Ballentyne is among the most controversial commanders serving in Starfleet as of 2399. Twice court-martialled and eventually forced out of Starfleet service for speaking out in favour of supporting the Romulan evacuation efforts, Ballentyne was reluctantly granted a new commission as Captain in 2399 in light of the increased Romulan threat and need for experienced starship commanders.

Born into an affluent, landed South African family of British descent, Alicia Ballentyne grew up with a taste for the finer things in life and surrounded by Federation politicians, jurists, scientists and explorers. Ballentyne was educated at St John’s College, Cambridge and subsequently at Starfleet Medical Academy. Prior to joining Starfleet Ballentyne was an active anthropologist and engaged in several civilian research expeditions within Africa and off world, taking a particular interest in beliefs with regard to magic and healing.

Alicia’s decision to join Starfleet like many of her decisions, was never quite understood within her family. It was clear from the beginning that she was ambitious and that her principles and scruples could at times bend to accommodate those ambitions. The four years at Starfleet Academy were the happiest of her life, and she made many friends and allies during this time including a number of future Admirals, including Anatole Lazarus.

Following the conclusion of the Dominion War, in 2375, now Lieutenant Ballentyne was assigned to the Achilles, a starship tasked with the exploration and defence of the Tholian boarder region. During her time aboard the Achilles, Alicia developed affections for the Commanding Officer, Captain A. J. Bishop, although her feelings were unrequited and later contributed to her acceptance of a command programme training position, and eventually the post of Executive Officer aboard Starbase 153.

Aboard Starbase 153 Ballentyne proved herself to be a competent in diplomac, strategic and intelligence analytics and cultural affairs, in addition to command and leadership; on two separate occasions taking command of assigned vessels for long distance missions. In recognition of her hard work, dedication and growing skill, she advanced in rank to Commander during these years. By 2377, Alicia Ballentyne was an ambitious young officer with excellent credentials and a growing contacts book. However, she was also unmarried and pregnant with an unplanned child.

Her daughter, Claudia Ballentyne was born in 2377 and in an effort to provide a safe and routine environment for her young daughter, Ballentyne applied for transfer to a planetary starbase, accepting the role of Clinical Director at a Starfleet Medical Hospital on Calder Il. However, the position did not suit Alicia, her career forged in the midst of war, and growing in successive galactic ‘hotspots’ had not prepared her for a quiet life; she did not find the strong community she had so revelled in during her Academy and early career. When she was offered the promotion and command of the Saratoga in late 2378, she seized it with both hands; her infant daughter accompanied her aboard this Nebula Class vessel. The successive positions aboard the Sutherland and at 153 were formative and growth, her tenure of command of the Saratoga was where she came into bloom, excelling as a Commanding Officer. However in 2379 the Saratoga suffered irreparable damage at the hands of the Romulans. The incident was later deemed to be a ‘friendly fire’ incident at the Neutral Zone. While all hands escaped alive, Ballentyne’s first command was decommissioned.

In 2379 Ballentyne received command of the Prometheus class Proteus, among the most glamourous starship commands available that year. As the Captain of the Proteus Alicia proved herself an able diplomat and combat leader, seeing the successful signing of a Breen-Cartesian Treaty in extremely adverse circumstances. However, upon return to Earth, it was discovered that all was not well – there had been alien infiltration at the highest levels of government – the President of the United Federation of Planets resigned in favour of a largely unknown successor. His unelected regime saw a purge of Starfleet, the reassignment of the Proteus’ crew and increasing levels heavy handed policing. Admiral Janeway, before her arrest covertly instructed Captain Ballentyne to seek Klingon assistance. With the assistance of her former crew, Alicia seized the Proteus by force. In the struggle, a number of former crewmembers were reported as killed in action (including Donal Mulryan, Chief of Security). However, the greater tragedy was still to come. Spacedock Command refused to release the Proteus or open the Spacedock doors. The situation had escalated and Ballentyne saw no choice but to fight her way out and and fired three photon torpedoes into the doors from within Spacedock. The fiery explosion from which the Proteus flew to freedom from, killed five thousand officers and civilians and caused the destruction of two other starships and a host of auxiliary craft. Ultimately, the Proteus crew uncovered the conspiracy and cleared their names. However, the court-martial, dismissed Ballentyne from her post, demoted her to Lieutenant Commander, and placed her on leave for three months, pending reassignment. Although spared criminal charges, the ex-Captain, clear of conscience had made enemies: the families of those who died, the officials who stood the profit from the new regime and the enigmatic creatures themselves.

Eventually, Ballentyne was remobilized, as Executive Officer aboard the Lancelot, during which time she was promoted, once again, to Commander and coordinated two successful missions – once again exposing a Starfleet conspiracy and an assessment of a candidate world for Federation membership. Aboard the Lancelot Alicia recovered, growing as a person to some degree, perhaps stimulated by the animosity between herself and the Commanding Officer Captain DeVries, despite a challenging interpersonal relationship, the pair functioned effectively, their ‘maverick yet formal’ command styles were quite complimentary, despite the occasional kidnapping, shouting match, or indeed confiscation of Earl Grey tea.

Following her tour aboard the Lancelot she was summoned to Earth to take up a role as a Military Attaché, to the Department of Starfleet. However, after the untimely death of the Commanding Officer (Commander Simon T. Caius) during an attack from a rogue Breen faction, she assumed command, in preparation for a multi-ship assault on a fortified Breen position. Her command status was later begrudgingly accepted by Starfleet Command.

Despite her newfound security and position aboard the Bismarck, the enemies she had earlier, within the Admiralty and civilian government saw her ejected from the command of the Bismarck. However, some allies within in the Admiralty, specifically, Anatole Lazarus, had become aware of the situation, although unable to reinstate her aboard the Bismarck, she was assigned the new command at Outpost G-12, a former Cardassian mining station that had been handed over to the Federation following the Dominion War.