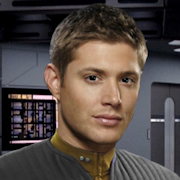 Before the academy, Tov was an athletic child growing up on various ships and stations. Both of his parents were Starfleet Officers, his mother was a Counselor and his father was an environmental specialist in Engineering. Tov was always doing any sports he could, and when he was able to join a team during his parents station assignments, he joined teams for rugby, soccer, and swimming when they were available. When left without teams to join, he practiced martial arts with anyone on the ship that would teach him. Tov started his Starfleet career as a junior security officer, fresh out of Starfleet Academy. He worked his way through various positions in the Security/Tactical department. On one assignment, he was able to assist with a hazard team assignment. From then on, he has looked and applied for hazard teams when he could. Part of this was because of a desire for adventure, and part of this was because it allowed him to be of the most help he’s ever been to his crews.

His most recent assignment is on the USS Adelphi, where he has assumed the role of Chief Security and Tactical officer. This will be a startling change for Tov, moving out of the Hazard Team business and into the head of a departments role.