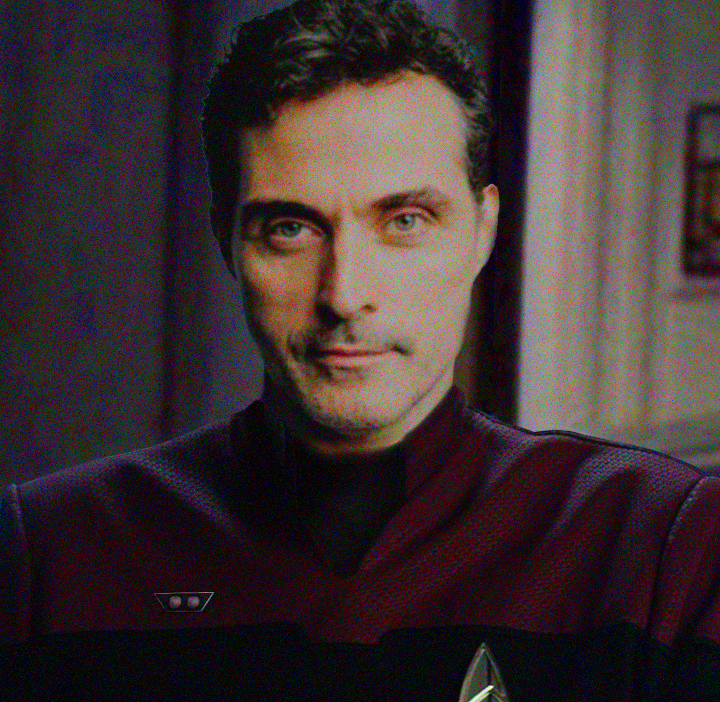 Matt Cody is a people person and a diplomat, genuinely wanting to learn more about people, cultures and alien races. Cody’s innate skill involves understanding a person’s interests, motivations, family details and history which in turn gives him a truly perceptive insight into an individual’s personality and what makes them tick. His promotion to commodore tore him away from his beloved starship centre seat but provided him with the opportunity to improve situations within his new sphere of influence as Deputy Director, Starfleet Command School. A return to active operations has seen Cody take up the position of Deputy Commander Task Force 38 within Starfleet's Fourth Fleet, followed by promotion to rear admiral as Commander Task Force 38 & Director, Delta Exploration Initiative.

Matt Cody was born in Tycho City, Luna in 2347 to Dr Henry Cody, a prominent Federation astronomer and his wife Helen. A quiet child, Matt performed well at school, but not exceptionally so. His brother Sam was 17 years his senior and had already graduated from Starfleet Academy by the time Matt was 5 years old and Matt worshipped him, looking forward to the regular communications from his big brother the galactic explorer.

From an early age, Matt proclaimed his desire to follow his brother into Starfleet and in 2365, sponsored by Sam – now a captain with a ship of his own – Cadet Matthew Cody began his education at the Academy.

His logical, methodical and structured way of working leant itself to a specialization in Operations Management and Cody excelled at the Academy, graduating as salutatorian of the Starfleet Operations Branch School class of 2369.

Two months later, just after Ensign Cody had taken up his first position as a junior operations officer aboard USS Venture, his brother Sam’s ship USS Essex was reported missing with all hands near the Cardassian border and Cody was devastated.

The following year, a newly graduated medical officer named Juliet Bonner was assigned to Venture and the two young ensigns were instantly attracted to each other. This attraction quickly blossomed into romance and Cody and Bonner were married by the following year. Soon afterwards Cody was promoted Lieutenant JG and Juliet discovered that she was carrying their first child. Their son was born in 2371 and the couple named the boy Samuel after Cody’s brother.

Early in the Dominion War, Cody was promoted again to Lieutenant and assigned as Chief Operations Officer aboard the Miranda-class cruiser USS Nautilus, one of several mothballed vessels reactivated by Starfleet to take part in the conflict. Around the same time, Juliet became pregnant once more and left active service to return to the relative safety of Earth with Sam.

Following the war, Cody’s career continued to progress and he and Juliet welcomed their third child in 2376.

Cody was appointed executive officer aboard USS Midway in 2386 and around the same time, Juliet was asked to return to active duty due to her specialization as a virologist to join a joint Federation-Klingon medical task force fight in fighting a particularly virulent outbreak of Dorugan Flu on Sherman’s Planet. Cody was greeted with the heartbreaking news that his wife had succumbed to the virus later that year and he returned to Luna where his parents had been caring for their grandchildren whilst both Cody and Juliet were away.

Returning to duty in 2388, Cody was pleased to learn that Sam’s application to the Academy had been successful as he joined USS Republic as her executive officer.

Promotion to captain followed two years later and it was while serving as commanding officer aboard USS Arnhem that Cody’s second son Harry entered the Academy just as his older brother graduated.

Following successful tours as the captain of the Manticore-class USS Cerberus and the Odyssey-class USS Polaris, Cody was somewhat taken aback to learn that he was slated for promotion once more, this time to commodore and assigned to take up the position of Deputy Director of Starfleet Academy’s Command School.

Following a steady, if uneventful three years serving at the Academy, Cody was reassigned as Deputy Commander Task Force 38 aboard Starbase 38 at the Alpha Quadrant end of the newly-restored Barzan Wormhole. Soon afterwards, following a Breen assault on the starbase, Cody was promoted rear admiral and assigned as the new Commander Task Force 38 with orders to lead the entire task force through the wormhole and continue their mandated mission of exploration and diplomacy of the Delta Quadrant from the far side of the galaxy…