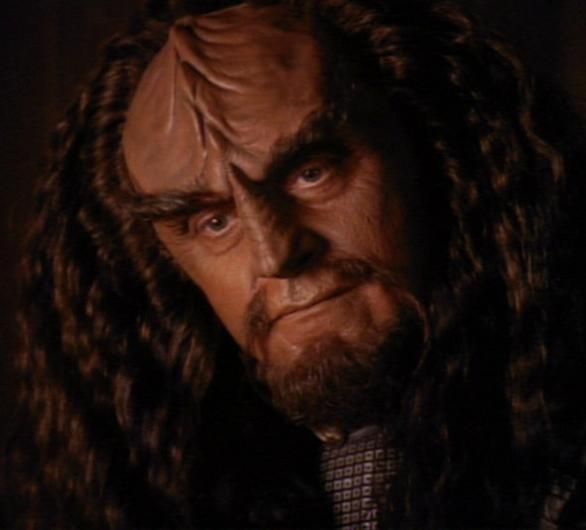 One of the first Klingon officers in Starfleet, Koloth was named after one of the most venerable Dahar Masters of recent history by his father, a well-respected Gin'tak to a Klingon Great House and an accomplished diplomat. Although Koloth respects his heritage and has spent time serving aboard Klingon vessels in the past, making numerous efforts to honour his namesake, he has proven his dedication to Starfleet and to the Federation, upholding its ideals with a ferocity and zeal comparable to any fabled Klingon warrior.

Born to Qu’Vak, a much-respected loyalist and Gin’tak to the House of Antaak, Koloth was named for one of the most famous Dahar Masters of the 23rd and 24th centuries – a bold name, chosen by a bold man known for his prowess as much in battle as at the negotiating table. Born in 2349 on the colony world of H’atoria – a primary holding of the House of Antaak – much of Koloth’s childhood was spent traversing the Klingon territories and beyond with his father, the leading figures of the Great House, and other retainers. He was raised on the stories of his namesake, the glories of the Klingon Empire, but also a deep respect for their former foes: the Federation, with whim Qu’Vak had been involved with several times over his long and storied life.

When Koloth was coming of age, the seeds of the Klingon Civil War had been sown, when forces loyal to Duras and Gowron finally went to war over the succession of the Empire. Qu’Vak’s lord was loyal to Chancellor Gowron, and although Koloth was too young to serve as an officer in the Klingon Defence Force, he enlisted as a bekk and served as weapons officer on the IKS Vor’cha. It was during this conflict that he witnessed and heard of the bravery of Worf, son of Mogh, a Starfleet officer that had resigned his commission to fight on Gowron’s side. This, combined with the tall tales told by his father, led to a fascination with the Federation from the young Koloth, and the opportunities therein presented.

Although his father was a stern believer in the Empire and its tenets, Koloth was not raised to be blindly obedient or loyal to the Council; he raised his son with a healthy scepticism. When Koloth spoke to his father about Worf, his bravery and the Federation, Qu’Vak actually spoke highly of their old enemies, and regaled him with more tales about Kor, Koloth and Kang and their encounters with Starfleet. Whilst their House had also been loyal to Gowron during the recent war, Qu’Vak did not hide his concerns about the premier from his son. Koloth himself, although young, already harboured doubts about Believing that a career within Starfleet did actually offer a life of honour, and that the Federation may even be the future for the Klingons, Koloth, with his father’s blessing (and assistance, speaking with Starfleet captains to gain sponsorship) applied for Starfleet Academy, and was ultimately accepted.

Despite his previous experience fighting on the frontlines of the Klingon Civil War, Koloth entered as an advanced navigation student at the Academy. Although he was careful to never let others forget his Klingon heritage, he made a point to not indulge in the perceived negative habits of his people that he discovered were commonplace against his new classmates. Whilst there were some reservations had by both his comrades and teachers, he managed to make a good number of close friends and performed to a high standard during his studies. It was during his tenure at the Academy that the Klingon-Cardassian War began the treaty with the Federation was annulled. Whilst Cadet Koloth faced some prejudice from certain colleagues, the second-biggest challenge was the call to arms that was delivered to him by the Klingon Defence Force as a former soldier. He resisted this, and the political opponents of his house used this as capital against his father and allies – and the biggest challenge was the ultimate death of his father during the conflict. This almost led Koloth to abandon his post and join the struggle, which was increasingly becoming a civil matter once more. It was only the advice of his friends and mentors that prevented him from leaving, although plenty of vitriol was directed at him by some of his former comrades. He did return to attend his father’s funeral, along with most of the House of Antaak, who still considered Koloth amongst their number. The eventual death of Gowron, however, led to a slight diminishing of their power and representation in the Empire.

Koloth graduated in time to serve as a relief flight control officer on the Tycho as the Dominion War began – a role that often required him to assist the tactical department and to become involved in field combat in away teams, courtesy of his expertise and abilities. Through acts of bravery and performing his duties admirably, Koloth was rapidly promoted to junior-grade lieutenant and made the second flight control officer. Given the Tycho was an Akira-class, it entered into many direct engagements throughout the war – one of which actually resulted in the death of Koloth’s direct superior. Due to the shortages of available staff and his evident talents, Koloth assumed the role of chief conn officer until the conclusion of the war, at which point the promotion was formalised and another promotion in rank confirmed for the young Klingon officer.

Until 2378, Koloth served with distinction as a celebrated pilot and talented officer on the Tycho, at which point he was handpicked by the new commanding officer of the USS Prometheus, who had designs on raising the lieutenant up to a command-level status. Due to its nature, the Prometheus was involved heavily in border patrol as the Federation attempted to return to its roots, and Koloth continued to perform in an exemplary fashion. As promised, he was promoted to lieutenant commander and made executive officer. Within two more years, he was a full commander, and he served on the Prometheus until the flag officer managing Deep Space Four requested his transfer to the space station.

Whilst the difference in duties appealed to Koloth for a brief period, and he was able to shore up and develop more of tactical and command knowledge, two years of service on the starbase was more than adequate for him until the Officer Exchange Programme was opened once more. Due to his dedication to both Federation ideals and the Klingon culture, Koloth saw this as an opportunity to spend time amongst his kinsmen once more, and to continue to develop relations and understanding between his two peoples. He was made a provisional la’ aboard the IKS Sim’chaQ and served as the vessel’s first officer for almost a year, even commanding the vessel on occasion. Although there was some suspicion from the crew, he soon proved himself capable and able to fit in, earning himself new friends from his time with the Klingon crew.

When he returned to Starfleet, he served as the commanding officer of the Defiant-class Wasp for a brief tenure, engaging in exercises around Romulan space during the supernova crisis, to assist in the Federation’s response. Upon the conclusion of that stint, he was promoted to captain and assigned as the commanding officer of the first ship had served on: the Tycho, which was an absolute honour for the son of Qu’Vak. He held this post for four years, until another the Exchange Programme offered something more daring than before; an opportunity to exchange roles with a commanding officer from the KDF was presented, which was accepted with some tentative excitement by Koloth. For just over a year, he captained the IKS Qu’Vat, and even managed to assist in two first contact situations for the Klingons and, by extension, the Federation. His handling of it, whilst more tempered than the typical KDF approach, earned him commendations from both sets of superiors. He was almost dismayed at the conclusion of his assignment, but was even more dismayed by the offer when he returned to Federation space: he was offered a promotion to the admiralty at Starfleet Command. Although it surprised Command themselves, Koloth had no qualms about turning down the offer, being something he was not yet ready to accept. Although he was a Starfleet officer, he was a Klingon first and foremost, and he still believed his place was with his boots on the deck of a starship.

The Tycho was assigned to a new commanding officer, and Koloth was instead assigned to the USS Stargazer – a ship bearing a name of great repute, which appealed to the Klingon officer. He commanded it on several deep space assignments beyond Federation space for four years, before being reassigned to the Delta Exploration Initiative and Task Force 38. Appointed as a fleet captain to lead the efforts of a select task group, Captain Koloth has amongst the highest number of excursions to his name in the Delta Quadrant, and is often requested to now guide and manage the newest additions to the fleet. Most recently, he has been given responsibility for operations in the Nacene Reach, where he typically commands remotely from the Stargazer.