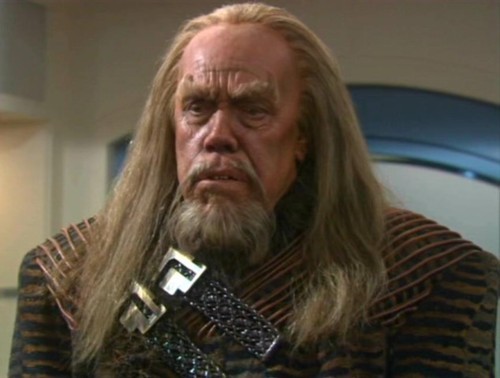 Though Ka Mar was not happy when the IKS initially began assigning Klingons to Federation Starships, especially as a Physician, he has over the years taken a liking to these soft, and puny earthlings with their frail minds. Ka Mar can be antagonistic, demanding, and treats all subordinates even to include the Senior officer with disdain. However over the years since the KDF started stationing Physicians and others onboard Federation Starships, he’s gained a different picture of them, though not as tough as Klingon Warriors, but warriors still in thier own right.

Ka Mar is a descendant of QuchHa’, Klingon’s who have been infected with the Augment Virus, and as a result had a more Human-like appearance due to lacking a cranial ridge.

Within the Klingon military, QuchHa’ generally served in units with others of their kind, though it was not unheard of for units to be a mix of both types of Klingon. The QuchHa’ were looked down upon by their HemQuch counterparts (Klingons with ridged foreheads) , and were considered to be less honorable. Many Klingon warriors had their appearances surgically altered to appear in the more traditional form.

However, Ka Mar chose not. He was proud of what his descendants had achieved as a grou[. He felt that they had gained superior ambition from their augmentation, and that allowed them to rise to power in the High Council and to the lead the Empire’s glorious expansion into deep space.

In the 2270s relations between the QuchHa’ and HemQuch became particularly strained as a cultural schism erupted between the two groups. Increasingly HemQuch began to take up prominent roles and played a greater part in encounters with the Federation and Romulan Star Empire, usurping the strong QuchHa’ presence at contact with the two powers in previous decades.

This internal conflict came to a head when a group of extra-dimensional beings attacked and destroyed a top-secret Klingon Computer facility where its newest supercomputers had been able to perform theoretical problem one that had vexed Federation, Romulan and other alien species to include the galaxies most proficient computer experts, the Binars for centuries.

The problem lay in a computer’s ability to store massive amounts of information then regurgitate it at mind blazing speed as it did quadtrillions of operations in nanoseconds. The Klingons had perfected a way to speed up the supercomputers computing power, plus Klingon scientist had already been had been able to time compress the information so that the computer could even predict with accuracy rate of over 99.9%, when and where any Federation Starship would enter and exit under warp conditions at any point in the galaxy.

The security of the facility had been the responsibility of QuchHa’; with its loss, the HemQuch group took the political opportunity to gain more power in the High Council and force the entire QuchHa’ sub-race into less honorable postings at the extremities of the Empire.

Ka Mar was born in the city of Raskid in Klingon, then as a child he lived with both parents on an asteroid that served as a listening post just outside the Federation world of Risa . With both parents Physicians, they were loyal, and proud members of the empire and served in whatever capacity asked of them. As physicians both were used as “Special Medical Envoys” for the Empire’s spyping missions and served well.

When the time came Ka Mar trained as a Physician, in the art of General Medicine, and Klingon Augmentation surgery. Unfortunately he was held back in advancement because he had refused to undergo the procedure to restore the characteristic Klingon ridges. However, due to the strain to Klingon loses during the Dominion War, he has been used in greater roles, serving as the personal physician to many Ambassadors, and has excelled. Serving with great distinction on many IKS ships; however he was only able to advance to the rank of La’ (CMDR), due to his refusal to look like his HemQuch friends.

It was quite by accident that Ka Mar received orders to report to the IKS VeQBach as a Physician. In 2396 as the IKS and the Federation were now allies, having starships containing both Klingon KDF officers and Starfleet Officers. Having reached the rank of Commander (La’) Ka Mar became the assistant Ships Physician, but in 2398, he was promoted to the position of Chief Physician/CMO-KDF/Starfleet