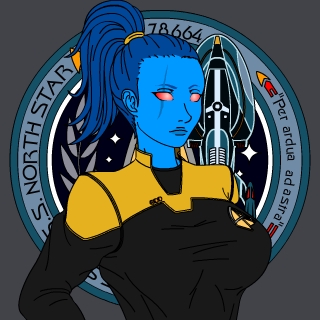 Born and bred for combat, Lieutenant Commander Talisya Tyrani performs her job admirably, and her efforts have earned her the respect of her crew and captain. But despite getting along with her crewmates, she keeps them at a distance. Her solitary history is hard to break free of, despite the best efforts of her yeoman. Her solace is in her two daughters, Titania and Tenaya, who keep her moving forward even when she doesn't feel like she has the strength.

Talisya Tania Tyrani was born on Chi Prime, homeworld of her species. An extremely cold and isolated world, she spent most of her youth only loosely aware that any other intelligent life existed outside of the Chi solar system. Civilizations such as the Federation, Klingon Empire and Romulan Empire were known to the Chi Ascendancy, but the affairs of the external powers of the galaxy seemed so far away that most Chi didn’t bother to explore what lay beyond their borders.

Tal was born only a few days after the Dominion War had begun, and was too young to remember it by the time it had ended. Her mother was a scientist, who worked on new warp technologies. Her father was more traditional, choosing to devote himself to the Chi Self Defense Force. He led his two daughters, Talisya and her sister T’shana, down this route, training them from a young age in the art of Chi martial arts.

For most of her young life, Tal trained with her father in physical combat. She trained nearly every day, and the days she had off she spent with her mother at the newly-built Starfleet warp logistics tower in the capital city. Up until she was 15, her daily routine was just that: routine.

On her way home from visiting her mother one day, a sudden snow flurry rose up and forced her to wait out the storm in a nearby cafe. She met a young man there who she conversed with until long after the storm was over, before finally realizing it was getting late and she needed to get home. She said goodbye to the man and began her trek back home. Unbeknownst to her, she was being tailed.

As she walked through a dark alleyway, she was grabbed from behind and pinned against the wall by the same man she had been talking with not two hours earlier. She screamed for help but no one could hear her cries in the secluded area she had found herself. The man proceeded to sexually assault her while she screamed, leaving her for dead once he was done. After recovering some from the shock of what had just been done to her, Tal limped home to her parents, who had been worried sick about where she’d been. When she told them why she was late, her father nearly smashed a wall in rage at the idea that his eldest daughter had been raped.

In the morning, her father took her into the city and told the authorities what had happened to her. They ran tests to determine the level of trauma, both physical and mental, she had suffered, as well as determining who it was who had assaulted her. They were able to repair her physical injuries, with the exception of a long gash across her right eye that has left a scar ever since, and scheduled her for counseling and therapy, but as they treated her they discovered that her attacker had left something else behind: Tal, only 15 years old, was pregnant. Her father demanded that whoever assaulted her was brought to justice.

Thanks to the Federation’s assistance of technology since the Chi joined, it didn’t take long to locate the man who had violated Tal. He was swiftly apprehended and brought to trial. Tal’s father, who attended the trial, was nearly ready to kill the man as he was leaving the court, but his wife held him at bay, telling him that no matter what happened to the man now, it would not undo the injustice he had done to their daughter.

Tal attempted to move on with her life, and her mother and sister helped to care for their new family member while Tal continued to train with her father. Initially Tal had wanted to remove the baby, as she was far too young to have children, but it was her sister who convinced her to keep it. The child was innocent, she said, and had not had any hand in what happened to her. It should be given a chance to live.

For the first few days after birth, Tal refused to be in the same room as her newborn daughter. The baby reminded her too much of her assault, and it scared her. She hated reliving it. But as the days went by and she saw her mother and sister taking care of the little one, she started getting a feeling of something else when she looked at the baby: an attachment only a mother could feel for her child. Tal began to venture in, and bit by bit, grew closer to her little girl. Before long, she felt the caring love of a mother doting on her newborn. She decided it was finally time to give her daughter a name: Titania. She said it was a ‘strong’ name, one to protect her daughter from what had happened to bring her into the world.

When she turned 17, Tal decided that it was time to take her combat skills to Starfleet. She applied to Starfleet Academy, leaving Titania in the care of her parents while she went to Earth. She messaged home nearly every day so she could check up on her little girl and see how she was doing. Tal knew from the beginning what she wanted to do in Starfleet; after all she had been doing it her whole life.

During her senior year at the Academy, Tal had a two-month fling with a classmate. She became pregnant near the end of the academic year, after which time her boyfriend decided it was time to get out of the relationship, and had a sudden flashback to her assault six years prior when she found out, prompting her doctor to take her to a counselor. It only took one session for her to get over it, but she was again unsure what to do with the child. When she called home about it, her little six-year-old Titania, old enough to converse with her mother now, jumped for joy at the idea of having a little sister the moment that Tal told her mother and sister. That’s when she knew she had to keep the child. At that moment, all she wanted was for her little girl to be happy.

Tal graduated the Academy in 2394 as a Lieutenant JG, a result of her exceptional performance in her studies. Due to her pregnancy, however, she couldn’t take an assignment on a starship. Because she had a young daughter on Chi Prime and was about to give birth to another one, Starfleet sent her home, as a Security officer at the Federation complex in the capital city of Csilla. Now that she was able to support herself and her daughter, Tal brought Titania to move in with her. Her parents, sister, and daughter were all present as she gave birth to her second daughter, Tenaya. With two little mouths to feed now, Tal felt busier at home than at work, but she loved her daughters like she had never loved anyone else.

After three years at home, Tal came up for a transfer. Being fit for full duty this time, she was given orders to a starship, the Vesta class USS North Star, as Chief Security/Tactical Officer. She’s looking forward to this assignment, finally getting to explore deep space like she’s wanted ever since she joined. Because the Vesta class is a fairly large ship, she has also been able to bring her daughters to live with her on the ship so that she doesn’t have to be apart from them again.