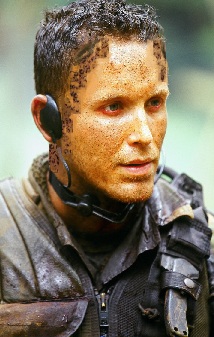 His background was infantry servie after a rushed Starfleet basic training during the Dominion war and established himself with honor. Anslo came to the VaqBach with little to offer but a warriors service, a medical degree and the ancient wisdom of his symbiote. He remade himself into the right hand of the fearsome Kretorg of Torath, a counselor to his ear that did his bidding when it required the delicate touch. Anslo is protected by the ship and the position, but is hunted by men who would take his Tol Symbiote and leave him to die.

The Tol Symbiote needed a place to live when it was injured and Anslo was ordered to receive it. Tol was a brilliant tactician and scientist, pivotal to the war effort. Anslo was a respected warrior, decorated and rising in rank but this overshadowed his ambitions. He tried to return to the lines but was forbidden, forced to live the life of a monk, and a slave to Tol. He tried to escape, was caught and they nearly extracted Tol by force, a lethal decision. Tol even agreed it was necessary and Anslo escaped when Tol feigned distress.

Anslo fled for his life, providing service under a false name and working his way out of the Federation. The Vaqbach, on a mission to explore the Delta quadrant, offering Tol a taste of the wilder side of life, and putting distance between him and the men hunting him.

Anslo feels like Tol is a parasite, who has only hurt him and derailed his whole life though. They are not in harmony, and in contrast to how it should be, are two separate personalities. Time will tell if they can achieve balance. For now, the hybridized creature has unique talents and perspectives.

The past lives of Tol

Bakkan Herr- Old in the time of Kirk, Bakkan was among the first Trill to oversee the membership initiative to join. Bakkan is an author and signer of the original Trill Federation incorporation.

Kwnby Luth- Served in Starfleet, fought in the Klingon Federation war. Among several key officers overseeing logistics and supply lines for the war effort. Renowned for Tactical genius and logistical tactics. Was on board a Starbase during Klingon boarding action and saw firsthand combat, it made him queasy from the brutality of the Klingons and is afraid of them.

Sbodn Macha- Author and Chef, renowned world traveler. Her book “Wayfarer” inspired billions of people to leave their homeworlds and see the stars. “Wayfarer” is a staple book read to children before their first space voyage. Had only one child, who was murdered by an obsessed fan who stalked Sbodn for years. Sbodn never left the Trill homeworld afterwards.

Ozvin Loza- Mother of three children, who were all Starfleet captains, their children nearly all joined Starfleet, and to this day, the Loza family is the largest single family serving from Trill, with over a thousand descendants spread across Fifteen hundred light years. Quotes from “Mama” have defined and shaped Federation and Starfleet policies.

Talbic Grentkit- A follower of Trill religious practices, Talbic was a genius level intellect who was very tortured and uncertain. Tol brought peace to Talbic who took a subservient stance, and Tol developed a curious autonomy of thought as a result. Talbic went on to accomplish every impossible task set before him before taking his own life from the stress of an unsolvable problem during the Dominion war resulting in massive loss of life.

Anslo Honn- An unjoined Starfleet MACO, Anslo was respected, and had seen action from many of the major war fronts across the Federation. He was the only Trill within distance when Talbic took his life, and Tol had to have a place to live on. Anslo was forced to receive Tol, and forced to live in medical restraints and isolation.