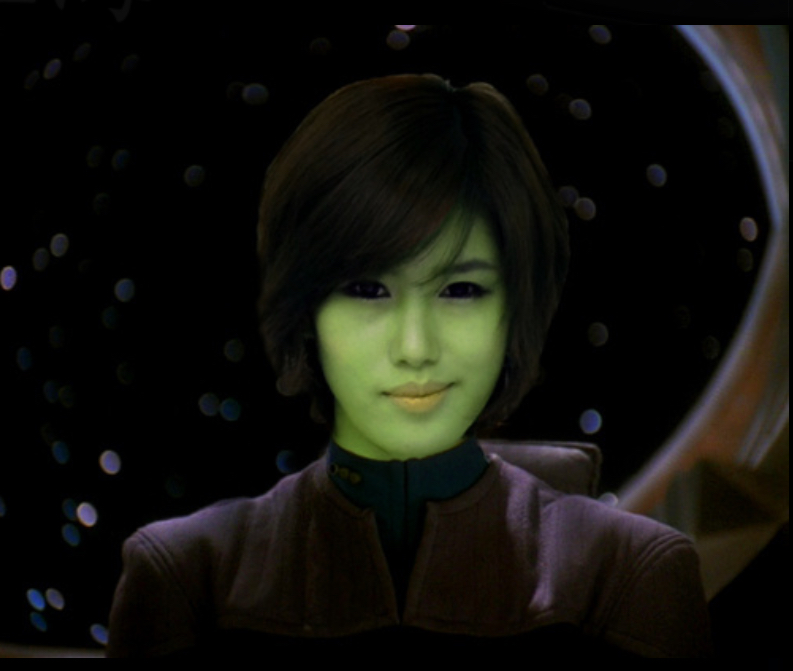 A former child slave turned Starfleet Fighter pilot and Dominion War combat veteran, little Lyn is the CAG aboard the Shanghai, where she's served for more than twelve years.

Karsel`lyn, better known as just Lyn, a child of an Orion ship master and his former Japanese-Terran slave, was raised on her father’s trading ship, where the young girl was employed as a pilot and helms woman.

After a trade deal went sour, her father’s Orion vessel was captured and boarded, all females aboard sold into slavery. Lyn herself was owned by the master of a Mining Station, who eventually used Lyn to pilot his miners to and from their mining posts.

While en route to return from a drop off, a Starfleet ship dropped out of warp, in-system, and was attacked by several Orion ships. In the resulting explosions from the destroyed Orion vessels, Lyn’s shuttle was thrown from it’s course, clipping an asteroid and going into a wrenching spin. Beamed to the Akira-class starship, a cold, naked, frightened Lyn was taken in and cared for, eventually being dropped off on a nearby planet which had a home for young Orion women just attaining freedom from slaver.

Karsel`lyn was assigned to a squadron in the fleet assigned to defend Vulcan. After seeing heavy action there, it was determined that the small half-Orion officer had been improperly consorting with the Captain of the Carrier her squadron was assigned to.

Demoted from Lieutenant Junior-Grade to Ensign, Karsel`lyn was reassigned to a squadron defending the Sol System, where a closer eye could be kept on her, and where it was unlikely that any physical relationship she might engage in would encounter a situation that could test her ability to perform.

After the Breen attack on Earth, Karsel`lyn’s squadron was rotated to the ‘front’, where she joined the fleet just after the narrow victory at Chin’Toka.

Given her flight abilities, Karsel`lyn was reassigned to a new squadron, employing the brand new Valkyrie-class space superiority fighters, and placed in temporary command of the squadron.

Prior to the Battle of Cardassia Prime, the carrier on which she was based was separated from the remainder of the fleet and lost behind the lines. Launching from the carrier in her fighter, Karsel`lyn successfully lead her squadron in assaults against three Galor-class destroyers, before her own carrier was destroyed in the arrival of a Breen warship. The two remaining squadrons of fighters, ‘Lyn’s included, fell upon the Breen warship, incapacitating it efficiently and swiftly. However, without warning, the Breen warship exploded, taking half of Karsel`lyn’s squadron with it.

Karsel`lyn received severe radiation burns from the explosion, while her gunner, Francine Le Duc, who was also the pilot’s lover, perished under the radiological assault. It wasn’t for another week before a Starfleet vessel could return the way the fleet had come to recover Karsel`lyn and her fighter.

She has since served aboard a number of vessels, including as the Aerospace Wing commander aboard the USS Tolkien, a Normandy-class Carrier, under Admiral Andreas Du Lac. Reassigned to the USS Ashling under Captain Caden Andrews, Karsel`lyn’s broken heart was slowly mended as she fell in love with the ship’s executive officer, Alejandra Montoya. Tragedy once again struck as Alejandra was wounded in action rescuing Karsel`lyn after the fighter pilot was forced to evacuate her fighter in a pitched battle with a Borg Sphere. To her horror, a Borg drone ended up floating through space and had grabbed ahold of the runabout in charge of rescuing the downed pilots. The drone assaulted Karsel`lyn’s lover, Commander Montoya, and to keep herself from being assimilated, Montoya killed herself with her own phaser.

Grief-stricken, the once-again wounded pilot was returned to Earth and Starfleet Medical, where she underwent psychological evaluation. She has since returned to the fleet, being rotated between various assignments in a bid to use her knowledge and experience to help train younger pilots.

She was later assigned to Starbase Obsidian as her Executive Officer. On a routine patrol mission commanding the Starbase’s attached Nebula-class starship, the computer system aboard was saboutaged, and the small officer was able to take the helm and successfully negotiate a crash landing onto the planet Obsidian, just mere moments before the ship would have safely reached the starbase.

Karsel`lyn lay in a coma for almost a year at Starfleet Medical, until she was able to awaken. With no evident lasting medical issues as a result of the starship’s mishap, Karsel`lyn was reassigned to the USS Camelot, then again to the USS London under Vice Admiral Thelek Uvar.