Who’s the girl that can laugh at a storm cloud?
Turn a frown into a smile for free?
Who’s the kid with a heart full of magic?
Everyone knows it’s Colette!

Nicolette Blanchet was born in Montréal, Canada, Earth, on May 7, 2366. The first child of Jacques Blanchet and Nadine Girault, a pianist and a ballet dancer, she was born into an artistic family. The marriage was not a happy one, as both parents tended to follow their own career rather than pursuing a future together. The family moved a lot during these early years, so Colette and her younger brother, Maurice never really had a permanent home and friends.

She often felt like an outsider in school and among other children, both because of her constant moving from one place to another and because of being a ‘weirdo’, not following fashion trends, thinking in more abstract ways than the ‘normal kids’. Despite these obstacles, Colette was a bright and intelligent girl from early on. A true bookworm, she loved to read, and also found fascination in everything connected to obscure Earth popular culture. Her sense of humour, and bubblish, bright and fun personality have also developed during these years. She admits to herself that she often uses sarcasm and ‘weirdness’ as a way to hide her fears and self-doubts from others, as well as from herself.

Eventually, her father left the family when Col was 9, and re-married to a former girlfriend of his, leaving the two kids in the care of the their mom, who settled down in Montréal.

Colette also turned out to be quite a talented piano player from early on. She started learning to play at 6, and eventually matured into quite a great musician. First, she studied from private tutors, then, at 12, she got accepted to the prestigious Youth Conservatory of Montréal, where she graduated at 18. Outside of classical music, she also tried to hand in jazz and alternative music, playing in different formations, as well as writing some (weird-ish) music. 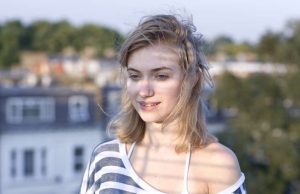 As a teen, Col still felt like an outsider, but learned to embrace her ‘weirdo’ nature, and gain enough confidence in herself to face life as it happens to her. She had a few friends, and even some brief romances. After graduating from high school, she briefly considered pursuing a professional career in music, however, seeing how her father ended up futile pursing his dreams, she made a surprising career choice instead: enrolling to Starfleet Academy. First, she wanted to become a counselor or a science officer, but eventually, decided on learning how to ‘fly things’.

Spending four years at the Academy in San Francisco, Colette graduated with the rank of Ensign, majoring in Flight Control. She was first assigned to the USS Hugo, where she served as Assistant Flight Control Officer for a year, before being given a new assignment, her first as Chief Flight Control Officer, on the USS Atlantis. On the Hugo, her department head commended Ensign Blanchet for her hard and persistent work.

Relocating to her new ship, along with her ever-trusty  cat, Schrödinger, Colette looked forward to her new job with a combination of enthusiasm and nervousness. During her first year on the Atlantis, she proved herself to be a valuable, hard-working officer, and a true asset to the crew. This includes her helpful actions during the ship’s conflict with the vicious race called the Rall. She also made some good friends on board, and hopes to continue her career in this vein.

The first impression of Colette is probably that she’s totally crazy. She’s overly bubblish, and overly extroverted, she can literally jump in your neck and talk about meaningless trivia for hours. A true ADHD person, she’s always buzzing around, bursting out of energy, getting on the nerves of people who’d prefer a bit more peace and quiet.

Below this surface, however, Colette is a highly intelligent and very much caring individual. Growing up in a dysfunctional family, she developed a high social sensitivity, and is keen on helping those is need, wherever she can. She is also quite bookwormish and has a quick mind. She’s a talented and trained pianist, and has a natural sense of music.

Colette is also a highly emotional person, who very much lives her emotions intensely and throughoutly. Given her ADHD-prone nature, she finds it difficult to control or hold back her feelings. She always says out loud what’s on her mind, even if it might sound rude occasionally. She can be happy and joyful in a moment, and then sad and depressed in the next. She’s very stubborn and rarely listens to other people, even if she knows they’re probably right.

Given her extroverted nature and the fact that she connects easily with others, Colette can make friends easily, but there’s only a very few people she really feels close to her. She lives in her own little world, not really caring about the ‘normal people’, and given her ‘weirdo’ nature, she doesn’t really feel she fits into society. This outsider status makes her feel a bit lonely sometimes, longing for someone who can truly understand her.

Skilled in piloting and music