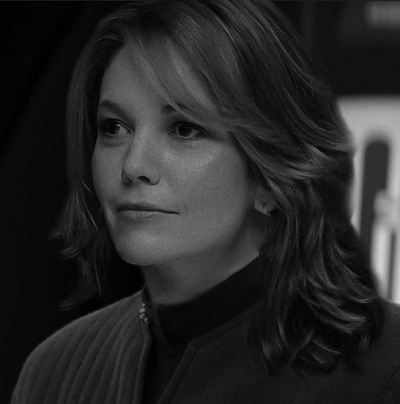 Assigned as Captain of the Hyperion in early 2390 Anna has served Starfleet for more than 25 years. In the aftermath of the attack on Mars and the Federations recent changes, she is torn between duty and the memory of the Starfleet she joined. She tends to be idealistic, sometimes to a fault, but is a strong believer in the core ideals and of the Federation. Having captained the Intrepid class USS Iowa for almost a decade, she is experienced at the sitting in the captain's chair and running a ship. Her new assignment on a ship of the line with it's role of being a 'hand' of the Federation and being sent to spots where Starfleet wants to make a statement stands in stark contrast her time on the Iowa as deep space exploratory vessel but she is ready to face the challenge.

Born in 2347 to Neil and Janice Caldwell, Anna lived a fairly normal childhood. Her mother was a nurse at Ceadrs-Sinani Medical Center and her father an attache in the Starfleet diplomatic corp. With her both her parent’s leading busy lives, she often took matters into her own hands once she reached the age where her parents were ok with leaving her alone for longer periods of time. In fact, her parents often encouraged this independent streak and to this day she believes it has severed her well.   As she approached 18 she had the benefit of being able to see both sides of the coin that is live in the 24th century. She watched as her mom grew and flourished in a civilian setting, free of still rules and regulations, while her father grew and flourished in his role serving the Federation.

By the age of 16 she had made her choice, with some encouragement from school counselors, and applied to Starfleet Academy with the intention of taking the science officer track. After entering the Academy at the age of 18, she struggled her first year. The independent streak her parents had nurtured had suddenly turned against her. While following rules and regulations came easy to her she had a tendency to follow them in her own unique way and chaffed under coursework that didn’t support and independent thought process.

By her third year things have improved considerably and her tendency to think and act independently, along with her habit to take charge of a situation or group, ended up benefiting her in the long run with multiple professors flagging her file for eventual recommendation to Command Academy once she reached the rank of Lieutenant. She graduated in the top 100 of her class and was assigned to the USS Boston as a science officer.

While serving on the Oberth Class science vessel was a great joy to her, she had the itch to do more. With the Oberth sticking close to home and usually studying and cataloging stellar phenomenon, she didn’t have much opportunity to do what she truly wanted to do: explore the unknown. In early 2373, after a promotion to Lieutenant J.G, she put in a transfer request to a be assigned to a deep space vessel. However the outbreak of the Dominion War changed that. With her background and service record being steeped in science, the Federation has little use for her and kept the weak Oberth Class vessel in the southern Alpha Quadrant while the war raged on.

While she escaped the true horror of the Dominion War, there has always been a pain of regret that she was not able to do more. In a time of war, science had little importance to anyone. After the Breen attack on Earth the Boston was recalled and Anna was assigned to Starfleet Sciences on Earth. While she finished out the war there, she saw no combat action and didn’t seem to develop some of the same war time viewpoints her colleges did. She served on Earth until early 2376 when she was assigned to the Galaxy Class USS Irwin as Chief Science Officer.

The Irwin was assigned to deep space on a 5 year mission in the south eastern Beta Quadrant. The first 3 years were very successful, making 11 first contacts, charting 17 sectors of space and  establishing a small colony at the edge of Federation space. During year 4 the ship made first contact with a species named the Volneth, a technologically advanced species that nearly matched the Federation but never expanded outside their home system. To say the contact wen’t poorly was an understatement. Within 15 minutes of arriving  in the 8 planet system 2 warships greeting the Irwin by firing on here despite sending out welcome greetings on all channels.

Either it was the Captain being cocky after so much success or just plain ignorance, the ships caught the Irwin by surprise and inflicted heavy damage before the XO ordered an emergency warp out of the system. In the end, the ships suffered hull breaches on 6 decks and 14 crewmembers were killed, including the Captain. Starfleet granted the XO a field commission of Captain and Anna was selected as the new XO, along with being promoted to Lieutenant Commander. The Irwin was commanded to return to Earth and over the 2 years it took the ship to reach Earth, Anna had a crash course on Command. While their were some bumps on the road home, she took to Command like a fish to water and after getting back to Earth she was enrolled in the Command academy.

Instead of the normal 4 year course, she spend 1 year there owning to the past 2 years of already living the role day to day. In 2383 she was given command of the USS Iowa and the ship was dispatched to the Gamma Quadrant to chart space near the wormhole. While the Iowa didn’t make any newsworthy discovery’s, Anna made a name for herself as a steady handed captain, who could get the job done and think quick on her feet during tense situations. While charting over 2 dozen systems and helping countless species and governments pick up the pieces after the Dominion withdrawal the ship didn’t loose a single officer and the ship rarely found itself in combat situations. This record resulted in some rather surprising news when she arrived back at Deep Space nine after 7 years of commanding the Iowa – she was to return to Earth and take command of the Sovereign Class USS Hyperion.

The transition to a ship of the line that carried with it prestige, authority and the heavy flag of the Federation from a exploratory vessel was a stark and somewhat surprising shift but Anna was ready for the challenge. With the Federation entering it’s most turbulent decade, Anna is ready to face what is ahead and push forward with the ideas the Federation had spent nearly 25 years instilling in her.