Caspian is completely devoted to her role and is always the consummate professional whilst on duty, although her firebrand personality is still there in reserve for off-duty moments. She is the life and soul of a party whenever she socialises and her friends are consistently amazed by her capacity for alcoholic beverages – and the fact that she never seems to suffer a hangover the following day.
She has a great many friends and acquaintances but sometimes wonders to herself how strong those friendships really are – would they be there for her if she really needed them or whether people just like to be associated with the ‘party girl to be seen with’.

Born in Paris, France in 2373, Charlotte Caspian spent her formative years in several of the more renowned historical cities of the Federation. Caspian’s father was one of the Federation’s premier anthropologists whilst her mother was a renowned geneticist – both parents were convinced that there was a link connecting all sentient life in the universe and directed all of their energies towards their vocation. Because of this, Caspian rarely saw her parents and from her early teens began to get into minor scrapes with the law and to socialise with individuals and groups that her parents regarded as ‘undesirable’. During their time on Alpha Centauri, they insisted that their seventeen year-old daughter spent time undergoing emotional counselling. After two sessions, Caspian had seduced the counsellor and entered into a physical relationship with him. Eventually Caspian openly told her parents that she was sleeping with her counsellor during their sessions and the despairing scientists sent her to attend university on Earth.

Incredibly bright from an academic perspective, Caspian was accepted to join Oxford University, and threw herself into her degree course on the History of Federation Art – a course both of her parents fully approved of. During her first year however, she seduced one of her tutors and recorded holo-images of their lovemaking. Soon afterwards, following an art exhibition in London, Caspian seduced the tutor’s wife and took more holo-images. Then she sent copies of each set to both husband and wife.

Following her suspension from Oxford (and the dismissal of her tutor), Caspian was eventually expelled from the university for conduct unbecoming a student of such a famous institution. By this time she was eighteen years old and promptly submitted her application to Starfleet Academy.

Citing desires to see the galaxy, protect the Federation and continue her pursuit of knowledge, Caspian passed the entrance interviews and examinations with flying colours, her examiners making note of her particularly high level of IQ and the direct manner in which she applied herself to all challenges. Coupled with her off-duty interests in sports and physical fitness, Cadet Caspian elected to join the Security Branch School.

Over the next four years, Caspian applied herself diligently to her studies and matured into a serious and focused young woman – although she maintained a mischievous streak which threatened to get her into trouble on a number of occasions… During her Academy career, Caspian’s parents made it frequently known that they felt that their daughter was aiming low in terms of her potential and that she should leave Starfleet to pursue an academic career.

Caspian graduated with honours in 2394 and was immediately assigned as a Security Officer aboard USS Dominator, spending the next two years undergoing advanced training in security procedures, small unit tactics and close protection operations in addition to successfully performing her duties. In 2396, Caspian was promoted Lieutenant JG and assigned as Assistant Chief Tactical & Security Officer aboard the much smaller Defiant-class USS Vanguard. This new role required Caspian to learn the duties of being bridge Tactical Officer and became highly proficient in the operational and technical requirements of maintaining a starship’s combat systems. Her time aboard Vanguard also allowed her to further her training in small arms, negotiation and diplomacy, anti-terrorism & counter-intelligence operations and landing party security procedures – with Caspian herself assuming close-protection duties for Vanguard’s commanding officer during away missions. 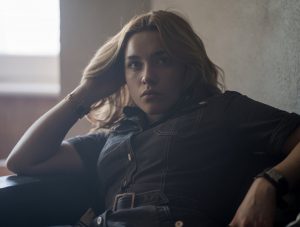 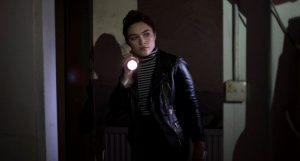