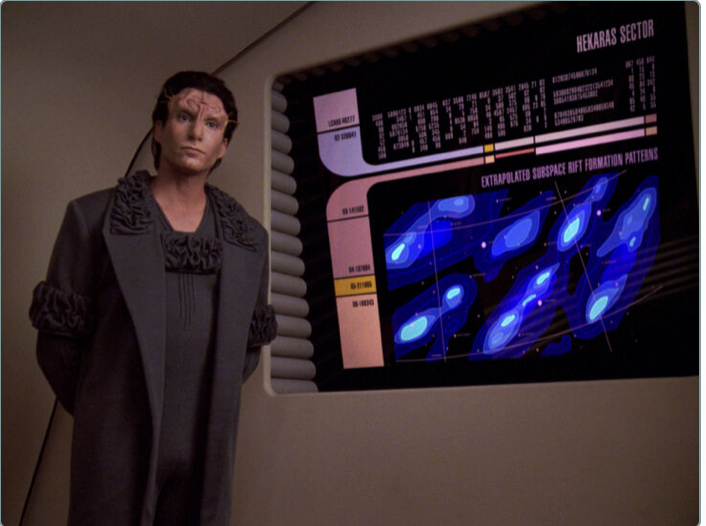 A physicist holding dual doctorates in Astro and Particle Physics, Bahnstahl Tasker’s thirty years of dedicated and honorable service within Starfleet naturally had him on a track to lead high level scientific missions. This career path was interrupted and diverted by the collapse of the transwarp gate in 2388, which left him and the crew of the Managua - his first command - stranded in the Delta Quadrant aboard a scientific vessel. After contact was reestablished and the Managua's original mission profile reinstated, then Commander Tasker continued to produce excellent scientific work while also proving himself capable of navigating the complex political landscape of the Delta Quadrant.

Bahnstahl Tasker was born in the late 2340’s on Hekaras II, the third of five children for Lilona and Thure Tasker. The boy was found to be naturally bright throughout his primary schooling, which at times meant attending public institutions and at others meant tutoring via LCARRS while traveling across Hekaras II with his entrepreneurial family. More apt to roam the subspace network rather than the outdoors, it was no surprise that Bahnstahl graduated his compulsory instructions at 15, highly sought by universities but socially inept and more than a bit shy. While the young man did come out of his shell during his secondary schooling, it took nearly all of his four year degree in order to find a balance between his academics and his social life. At times Bahnstahl wouldn’t be seen for days, only to appear at a party, drink to the point of stumbling, and going on about gravitational forces, exotic energy, or some other such concept that he “couldn’t believe nobody else consider[ed] something that effect[ed] [them] everyday!”

Bahnstahl graduated in the top ten of his university’s astrophysics program with a minor in particle physics, and easily secured a place in a graduate program for the former. Two more years later and the young man was on his way to a doctorate in the field, while managing to find time to continue his study of particles and theoretical waveforms. Upon receiving his Ph.D, the only place that truly seemed capable of advancing the practical application of his knowledge was Starfleet. As such, Bahnstahl enrolled himself in the Academy – much to the displeasure of his parents and family, all of whom had expected him to support the family business of trade-route pathfinding – and all but managed to breeze through the classroom based portion. While certain physical and social sciences challenged the way the still young Hekaran’s typical approach to learning, it did not take long for him to adapt to the subject matter and become a favored pupil amongst a large portion of the instructors. What turned out to be the true challenge was the coursework in fieldcraft, technical studies, and physical conditioning.

Cadet Tasker nearly flunked out of the academy twice due to disqualifying fitness performances in his first and second years. On a third occasion he was almost dropped from the program after failing to demonstrate an acceptable level of familiarity with a Type II phaser. And still there were fourth and fifth incidents surrounding Banstahl’s ability to cope with the vigors and stress of service aboard an active vessel in deep space. By far the most serious, Cadet Tasker was forced to repeat his fourth year in order to satisfy the requirements for active duty wherever Starfleet needed to send him. This was a humiliating experience. It was also one that Banstahl learned valuable life lessons from.

Beginning with his very first deployment aboard the USS Saratoga in 2374, Ensign Tasker unabashedly attended regular counseling sessions – both individual and as part of a group – in order to help maintain his positive motivations and regulate his negative personal tendencies. Through these sessions Tasker made the decision to continue the regular regimen of exercise he had been subject to during the academy, as well as to continue expanding his understanding of his chosen fields of study. Indeed Bahnstahl was rewarded for these efforts aboard the Saratoga, accruing a Captain’s Citation for Fitness, a full fledged bachelor’s degree in Particle Physics, and a published article in Physics Gateway regarding the behavior of low level warp fields in extreme gravity. His four year tour of duty aboard the Saratoga was concluded with a transfer to the Galaxy-class vessel Challenger in order to serve as the ACSO at the rank of Lieutenant.

The Saratoga and the Challenger both operated primarily in the Beta Quadrant, with the Saratoga most notably having participated in the Battle of Betazed during the Dominion War. The Challenger was directly involved with the C’hakilian War and Armistice Crisis from 2378-2380, almost as soon as Tasker came aboard. Seeing direct military action once again taught Bahnstahl valuable life lessons, all of which surrounded the notion that phasers will kill anyone, even those who don’t know how to use them. Continuing his counseling sessions proved invaluable during these trying times. Tasker was able to resolve his hesitation to become more comfortable with firearms which led to his again being cited by a starship captain, this time for Readiness. Both the CMO and CSO of the Challenger began to openly encourage Tasker to pursue Command Training during his second year aboard the vessel, advice that was continually given despite the Hekaran’s protests during his third and fourth years, then finally taken in his fifth. Though Lieutenant Tasker became Command Qualified, he opted to remain in the science department in order to better pursue his passions. Before he could return to the Challenger to continue his service, however, Bahnstahl was offered the Chief Science Officer position aboard the freshly christened Prometheus-class USS Shirgat at the recommendation of the Challenger’s CO, CMO, and CSO. Upon arrival to the Challenger to collect his belongings and say his goodbyes, he was greeted with an official promotion ceremony and awarded his third pip.

For the following six years, Lieutenant Commander Tasker continued to show excellence in his Fitness, Readiness, and dedication to duty. The Shirgat’s Science Department proved to be a well regulated and pristine example of what such a department should look like, and produced a number of officers that have themselves advanced their careers in meaningful ways. To his own credit, he has had two additional articles pubished in Physics Gateway for his research into extreme gravity, been the recipient of several awards for contributions to the fields of Terraformation and Warp Architecture, and directly aided in the discovery and charting of no less than half a dozen astrometric anomalies. An additional doctorate was also gained in the field of Particle Physics, truly cementing the man’s position as an expert in two fields that directly impacted the day to day operations of a starship. In 2387, Lieutenant Commander Tasker was given the opportunity to lead a science mission aboard the USS Managua – a Nebula-class starship that traded the customary tactical pod for a super-structure based suite of the most advanced scientific instrumentation Starfleet had to offer – into the Delta Quadrant on a mission of exploration and discovery. He was promoted to Commander, traded his blue uniform for a red one, and set off through the transwarp gate into the frontier. During their first year, Tasker and crew had a close call with a projectile-neutron star, encountered the Vaadwur and Hazari on numerous occasions, rendered aid to the Kesat, traded with the Hierarchy and Hirogen, and charted a number of potential routes that would allow further expansion.

Then the Borg attacked.

Managua was lucky enough to regroup with the rest of the Task Force before the destruction of the transwarp gate, though was of limited use in the survival-oriented circumstances of the group. While able to act as an early warning patrol vessel due to the sensitivity of its sensors, its relatively limited armament and mission capacity ensured the Managua stayed close to port. This was a highly disappointing development for all involved, though one redeeming quality was that the disarming nature of the science vessel served it well in a diplomatic capacity. Commander Tasker subsequently played host to a number of emissaries and officials from various races amenable to contact with Starfleet, which in turn added several additional soft skills, professional references, and verifiable competencies to the man’s already impressive resume. By the time contact with the Alpha Quadrant was reestablished in 2389, Bahnstahl had become a respected contributor to the success of the Task Force in the Delta Quadrant, even if his particular accomplishments were less impressive than those who had defended the stranded fleet or been ordered to continue their ventures deeper into the quadrant.

The Managua was allowed to continue its original mission once relief came to Task Force 38, and subsequently returned to charting stable routes for further exploration. Though nothing quite as astounding as the events of the first year occurred, regular contact with the Hirogen, Vaadwur, Hazari, the Devore Imperium, and the Hierarchy – virtually all of which, small and inconsequential as they were on their own, resulted in positive outcomes for the Federation’s diplomatic stance in the region, even if the encounters were tense or even sometimes combative – cemented Commander Tasker onto the short list for command of Starbase 38 in the early stages of its construction. Commander Tasker was consulted about the potential position beginning in 2393, when he was recalled to the Alpha Quadrant in order to lend his relevant expertise to the construction of the verteron array meant to stabilize the Barzan Wormhole. By 2395, after being promoted to full Captain and becoming integral to the success of the project surrounding the wormhole and the array, it was clear that Bahnstahl’s scientific, technical, and diplomatic credentials were overwhelmingly in favor of his being appointed to head the station. He was given official oversight of the remaining construction of The Colonnade, as Starbase 38 had come to be known, beginning in 2396.

The Colonnade has now become fully operational under the guidance of Bahnstahl Tasker, who was promoted to Commodore in recognition of both his indispensable contributions to the efforts of ensuring continued access to the Delta Quadrant, as well as to grant him authority to match the gravity of his posting as Commanding Officer of what was sure to become one of the largest and likely one of the most strategically important interstellar hubs in Starfleet.