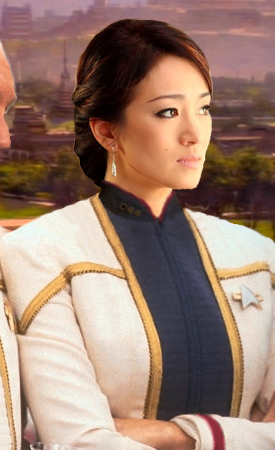 Tondro has had a long and storied history in Starfleet, and an interesting life in general. She is known for being the consummate listener and diplomat, much like the rest of her species. She excels at getting people into a room and forcing them to see things from alternate points of view, to come to a mutually beneficial conclusion. She is a scientist, a commanding presence on the field, and to those lucky enough to know her intimately, a stalwart friend and compatriot.

Niana doesn’t particularly enjoy talking about the years prior to her ship’s rescue in 2293. She was a teenager at the time, and precious few of her people had been able to escape the Borg, only to be caught by a spatial anomaly. Were it not for the swift intervention of a Federation Starship, it’s presumed the entire El-Aurian race would have gone extinct that day.

Niana attended Starfleet Academy between 2295 and 2300, majoring in Theoretical Particle Physics and Temporal Science. She didn’t graduate anywhere near the top of her class, but enjoyed the time she spent at the Academy, knowing she had a very long life to learn more.

Her first posting was aboard the USS Ride, an Excelsior class ship. Assigned as a junior science officer, she spent most of her time aboard the ship in the Astrometrics lab, studying various spatial anomalies and organizing star charts. It was not the most riveting assignment, but it allowed her to read volumes of peer reviewed research on various temporal phenomenon, and get a better understanding of what had happened to her as a teen. At the end of her assignment she was promoted to Lieutenant (junior grade).

In 2310, Niana took a posting at the Daystrom Science Institute. She earned a reputation for working diligently on her projects, and submitting her research in a timely manner. During the course of the 26 years spent at the Institue, she was promoted to Lieutenant. She had never been one to hunt for rank advancement, preferring to study and lead scientific teams, but accepted the praise all the same.

In 2350, Niana was assigned once again to the USS Ride. As the ship’s Assistant Chief Science Officer, she was known for a very collaborative command style, preferring to get her entire group in a room and talk through a problem, versus doling out orders. In 2364, she was advanced in rank to Lieutenant Commander, placed as the Ride‘s Chief Science Officer, and offered the position of the ship’s Second Officer (2XO), placing her in the trusted command staff of the ship.

Niana would fill the role of Chief Science Officer for approximately two years, before her Commanding Officer requested she go through Command Training. She reluctantly agreed, and passed. A few weeks later, the Executive Officer received his own command, and she was promoted to this position, with the understanding that her eyes would often be in the science labs, as she just couldn’t help herself. In the intervening years, she proved to be a capable commander, and smoother of ruffled feathers both among the crew and with those they encountered in their travels. The anti-climactic but tragic Battle of Wolf 359 caused Niana to seriously re-consider her career in Starfleet. She felt that the fleet hadn’t done enough to stop the menace that had decimated her species, and seriously debated press-ganging one of the Galaxy class ships into an all out assault on Borg space, though she knew it would be fruitless.

When her Commanding Officer retired, Niana was offered command of the Ride. While she had never really had any desire for command, she understood that it was important for those capable of it to teach those coming up in the ranks, to pass on their wisdom to the younger generation. She accepted, and was promoted to Captain. Approximately 2 weeks after she took command, the Dominion War broke out. The Ride was involved with a few minor skirmishes, and one major battle, but by this point the class was beginning to show its age, and she was instead assigned closer into the core of the Federation. In 2372, the Battle of Sector 001 occurred, and the Ride was among the first ships to assess the fallout after the battle had ended. Niana was glad she’d not had to face the Borg. In 2375, she was witness to the signing of the Treaty of Bajor, officially ending the Dominion War. In 2378, she celebrated the return of the presumed lost USS Voyager along with her fellow Starfleet officers. Other highlights of her career as a Commanding Officer were: 8 first contact missions, 7 refugee rescues, the discovery of a new nebula, assisting in better understanding the stellar phenomenon known as the Nexus, and finally in 2387, spending the better part of the year overseeing the rescue and relocation of many Romulans after the Hobus Incident.

Niana was promoted to Commodore, and oversaw a Task Group 89-48552, a small Task Group of vessels assigned to assist the Cardassians in continuing their rebuilding, as well as the smoothing of relations between their government and that of Bajor. She had a great deal of success in this field, and headed many peace and reparations talks.

Late in 2398, Niana was promoted to Rear Admiral, and the vessel she’d spent the bulk of her career on was retired, and sent to a scrap yard. Niana had knew the time was coming, as even with the most recent and best of upgrades, the venerable Excelsior class was outclassed by almost any other ship in the fleet. She was offered command of the vessel’s newest namesake, a leviathan Odyssey class starship, and assigned to go on an extended deep space exploration and humanitarian aid mission near the Bajor Sector with a small group of other vessels assigned to the same mission.