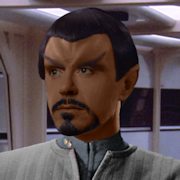 R’Tan was born into a very loyal Tal Shiar family. He was groomed from a very early age in espionage and intelligence collecting. He always acted the perfect operative, but in his heart, he was hurting over some of the monstrosities he was causing his own people. While on an intelligence collecting mission, he met and subsequently fell in love with a Romulan male named Tumis. Because the Tal Shiar frowns on personal relationships for their agents (It creates a potential weakness), they had to keep their relationship secret. They thought they were doing a very good job at it. However, while going over some information that was collected, R’Tan strated to connect seemingly unrelated activities together and uncovered a contingency plan that the Tal Shiar had. If at any time, the Tal Shiar felt their control over Romulus was faltering, they could push a button and essentially poison two thirds of the population of Romulus and Remus.

R’Tan was captured, and tortured. They even executed Tumis in front of him. This is when he found out they knew about the relationship the whole time, and were keeping it as a contingency plan, for just this occasion. After many months of capture and torture, R’Tan was able to escape just days before he was scheduled to be executed. He smuggled himself away on a Ferengi cargo vessel, and after a few months of hitchhiking, found himself in Federation space. It was at this point the Tal Shiar had caught up to him.

During a tense and daring chase, R’Tan was able to evade the Tal Shiar long enough to find a Starfleet vessel, and request asylum. After some weeks of tense and scary hearings, he was granted asylum. R’Tan’s first action as a Federation citizen was to sign up for Starfleet and show his gratitude by serving those that saved his life.