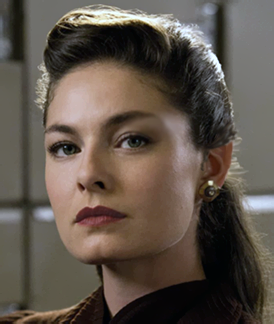 Sebell is a striking young woman with a bounce to her step and the hint of a grin on her face at all times. She completely overturns the typical expectations of even a half vulcan, embracing instead her human side fully and running with it.

How Sebell came about is a bit of a story for the USS Wickes. Her parents were both senior crew members who through harrowing circumstance were trapped together on a hazardous world following a failed away mission. The two rarely saw eye to eye- however, after four months they had become selectively chummy. As soon as they were rescued, the pair fell into the same familiar roles, even after it was found that T’Lika was pregnant. They agreed that after she was born that Sebell they would co-parent Sebell.

From the get-go there was trouble with that arrangement. Customs and backgrounds, religions and childcare philosophy were all very different between the two. The solution became timeshare for six months at a time. Then a year. Eventually, T’Lika decided that it was not productive for either of them to continue confusing the child with constant culture shock and granted Harris full custody of Sebell when she was age two.

Sebell wasn’t an ordinary child by any means. She was hyper-intelligent from a very young age and had a distinct flare for being creative and athletic. She had little interest in toys, instead she ran rough and tumble with her older brother or read to her younger brother. Cody was her designated defender. Peter was the touchstone that reminded her to be gentle. She loved them fiercely in a way that had no words. A gesture, a touch, what she brought or left behind were purposeful acts of devotion.

And then there was Harris, whom Sebell idolized. He could do anything. He was invincible. He fostered in her a great love of music and art in order to both vent her stronger emotions, correct her mood and keep control. Her stepmother Nadine did her best to offer the same sort of support with encouraging Sebell to be a gracious, polite young lady. Pieces of it stuck, but in all honesty, there wasn’t much use in sticking the rough and tumble girl in a dress or trying to teach her how to apply cosmetics.

Sebell lived a very comfortable life with her family in Seattle Washington in a nice house with a huge yard and a couple of dogs without trouble or grief except when it came to contact with her mother. T’Lika always called when she said that she would, but there could be months between calls. Each contact was perfunctory and stiff- as if she were performing a duty instead of taking interest in Sebell.

Following in the footsteps of her father, Sebell joined Starfleet with the idea of being an officer specializing in linguistics. She ended up in operations which didn’t quite fit until one of her teachers suggested a full dynamic swap into the command track. He sponsored her entry- and she thrived. Sebell graduated with honors and is awaiting her first command team spot aboard the USS Asger.