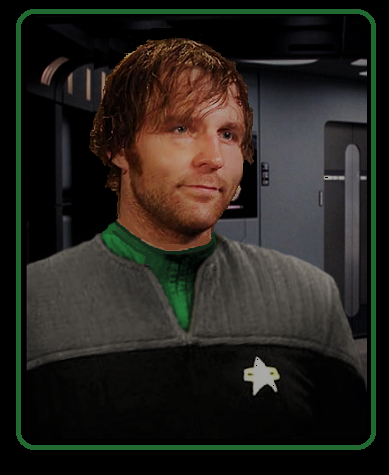 Kyle has just transferred over to the Shanghai and is awaiting orders.

Kyle grew up in a small town in Wisconsin, he is the eldest of three children. Unlike his younger siblings, he took the closest after their father. He was a troublemaker just like him, he was always getting into fights with others it didn’t matter who they were or if they were bigger then him. His father knew it was because he was rebelling against the strict rules he enforced at home since he did the same at his age. He enrolled Kyle in a mixed martial arts program so he could have something to get any additional aggression out. This worked, for the most part, he stopped getting into fights and began to do better in school, he even won a few competitions.

Around this time Kyle and his sister Emma began to notice their mother was acting weird, they had no idea what was wrong until she went into labor with just the two of them home. Thankfully their neighbor next door was a doctor who helped their mother through it, and that was how Tony was brought into the world.

After graduating Kyle worked around for a few years doing odd jobs for his dad’s construction company, afterward it was his dad who pushed him into enlisting.

Kyle spent his first sixteen weeks of training at the Marine Corps Recruit Depot, being cut off wasn’t the worst nor was the constant phyical training. It was the early morning training that no matter how much of it they did never stop bothering him.

During basic training, Kyle showed a knack for squad leadership. His MMA background helped out a lot giving him an edge in most training when it came to close quarters combat. During a mock bunker raid, a metal panel blew open and struck him in the face leaving him scarred. From what investigators discovered some sort of electrical charge had been building up inside of it. This was just a mistimed accident.

From the age of twenty-one to twenty-five he and someone who became a brother to Kyle, Akoni Kealoha served together on board the USS Ulysses during the year of 2384 the Marine unit on board wasn’t deployed once, the region the Ulysses was in shockingly didn’t suffer any disasters or fights that they needed to be deployed.

However, in 2385 Echo Team was sent in to aid in the evacuation of a small Federation outpost. An unnatural storm was ravaging the area, during the evac a group of locals who were anti-Federation on the planet ambushed the outpost, they had known the weather was coming and were going to use it to drive the Federation of their planet. During the battle, Akoni shielded Kyle from a phaser blast. Akoni was killed immediately, Kyle suffered some burning and minor wounds that would take him out of action for a few months. During that time he was removed from combat duty to work with the ship’s counselor to help with the psychological trauma from watching his friend die.

2386 he was given the green light to active duty he was switched from Echo team to Alpha during the time, during this year the same outpost was attacked again the fight proved to show off Kyle’s ability as a long ranged combatant as he managed to save his Sergeant from being overwhelmed by the local’s rush. Due to his action, he was promoted to a full Corporal and selected for FORECON Training.

The first portion of 2387 Kyle had returned to Earth for the additional training, it was a grueling eighteen weeks mostly training with reconnaissance school, SERE, combat diving, HALO, and free fall. Should he return for a special school he would take the Scout Sniper course. Once the training was finished he took the thirty days of leave to spend some time with his family before being redeployed back to the Ulysses.

His return came with a promotion to Sergeant and a change of position to the leader of Echo team. For the remainder of his time on the Ulysses, he took pride in keeping his team in top shape and ready for anything. Aside from leading the unit in a few mock battles with other marines and security a few times in joint exercises. However just before he put in his request for redeployment the ship was boarded by the remains of that anti-Federation group. The majority of the fighting took place on the engineering level, Kyle’s team was the main defense along with the security team that had gotten there before the area was locked down. Many people lost their lives mostly on the anti-Federation side of the battle. Kyle doesn’t like to speak of the battle they did their jobs and well he just isn’t a fan of bringing up the past when it comes to death.

With that he requested redeployment and was assigned to the USS Wyoming, his time was shortlived onboard not long into his deployment the ship rammed a Gorn vessel. Kyle was one of twelve who managed to survive but was soon captured by the Gorn spending two weeks tortured by them.

Kyle spent a lot of his time isolated not knowing the fate of what happened to anyone else who was captured with him, on the final day he was group together with CPO Christine Larson and Lieutenant Stanford, during that time Stanford lost it and panicked. In not his proudest moment Walken laid his hands on Stanford, the atmosphere was being vented out and the Lieutenant had given up. So he grabbed Stanford and shouted orders at him.

Thankfully Marines from the Hawaii lead by First Lieutenant Bolingbroke found the Larson, Stanford, and Walken. The three Wyoming crewmen managed to escape along with twenty-four other surviving Wyoming personnel. After two days and sending a message to his family, Kyle was officially transferred to the Hawaii. He thankfully wasn’t alone, his friend Lieutenant Junior Grade Iria Taltos from the Wyoming who thankfully didn’t have to go through what he did since she was brought over to the Hawaii before the destruction of the Wyoming. Now Captain Bolingbroke placed him in charge of his Blue Element Team.

During Recon of the planet Canterra IV, Sergeant Walken along with Captain Bolingbroke and the members of the Command Element made the grim discovery of *redacted* during the recon of the nearby colony of their objective the local Topaline mine. The now shielded mine was where a lot of surviving coloniets were being held and forced to work. Walken pulled Captain Bolingbroke aside and made two requests, that the *redacted* they had found was classified at least until it went through the official channels, and that Bolingbroke switch places with him.

With Major West planetside Captain Bolingbroke was the most senior officer now and Walken thought it would be best that Bolingbroke take his place of leading Frog Squad so he can remain outside the mine and lead the Marine assault with Walken leading the team that would be sent inside the mine to set up the escape plan. Before the mission began he was swiftly promoted to Staff Sergeant.

The mission worked Walken and the navy personnel who worked with him managed to retake the mine from the Gorn, once he had returned to the ship he found out about Captain Bolingbroke killing an unarmed and surrendered Gorn. Kyle was sickened by this, he hated the Gorn but even he wouldn’t kill an unarmed prisoner. After finding that the members of his Marine team knew about this and didn’t say anything to him. Walken put in for a transfer and not surprisingly he found out his sister did as well.