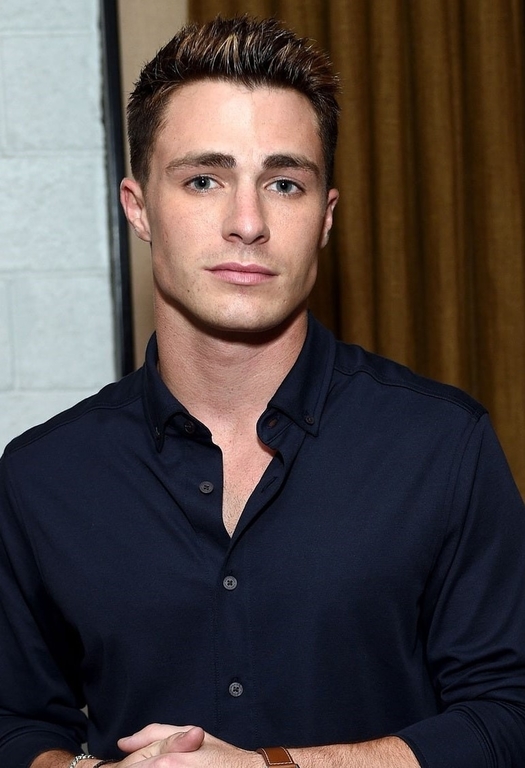 Scott is exceptionally fresh-faced and always well-groomed to the point many people think he is younger than he is. He is naturally on the thinner yet muscular and more athletic end of the physique spectrum. Scott sometimes grows a beard out to help him look more his age. His hair is shaved short across the sides with a little length on the top he can play with for either work, party or play. When working on something particularly intricate, Hunter is known to wear a set of glasses to reduce the strain on his eyes.

Scott was born in the hustle and bustle of New York City. His father an Ambassador with the Federation, his mother, a doctor at Starfleet Medical.

From a young age, Scott knew precisely the type of person he was, he loved animals and always went out of his way to help those that were injured, he also liked boys. In a way, this was both a good and bad thing. His family knew exactly what he wanted and how to cater to it, and it leads Scott to find his adventures too. There were many times his fathers would be called to the principal’s office of his elementary school for something he had said or for a fight he had gotten into for those who picked on him for his differences at a young age.

Middle school saw no real change in Scott, only dating was added to the mix. Towards the end of middle school, he came into his own. While he was more geek than jock, he knew he could still attract the attention of others. His first kiss was with a lab partner under the stairs of the science block. It was at this point when his intelligence shone through. There were times he just had to know more and would spend many an after school asking his teachers about things or studying.

High school was much of the same, more trouble and parties, yet stellar grades, a new boyfriend every other month until his final year. Scott found a kindred soul in Ryan Ashcroft, a bit of a geek like himself but more musical theatre than technological. They did the whole prom and met the parent’s thing and for once in a long, while Scott felt settled, happy and content. And, as all high school romances tend to do, it came to an abrupt end when the school did. Scott was more than happy and content to keep seeing Ryan, heading out to New York when he could, as Ryan had been accepted into AMDA. Ryan, on the other hand, wanted to head out an ‘explore more possibilities’. The pair has not spoken since.

This leads a return to form for Scott at the Academy. Good grades, but now parties, alcohol and boys. He was beginning to get a bit of a reputation on campus as the party boy who always seemed to pull things together at the last moment and still get top marks. This attracted a crowd of the wrong sort of people who only wanted to be a friend for the parties he threw. He did have one good friend, though, Peter Johansson. He was the one who saw Scott’s behaviour as a cry for attention and change. He suggested Scott join him in some part-time work in a new bar that opened in the Castro District called Glitter. It was a fun and friendly bar that gave Scott a challenge he needed and a new set of skills. It wouldn’t be long until he became a ‘show barman’ with many tricks pours and bottle spinning skills to show off. The pair became inseparable and even moved to a small off-campus apartment together on the same street as the bar. It wasn’t long until rumours started that the Medical Student/Barman team were an item, when in fact, they were just very, very close. They would often curl up on the sofa to study together or watch a holomovie. They would always head to their beds, though until one-night Peter took Scott’s hand and they went there together. Nothing happened, nor would for several months, they were quite content in an emotionally supportive relationship.

When things began to get more serious, there were rumours flying around the bar that Peter was cheating. Knowing the bar scene, it was likely just jealous types, and Scott brushed it off. They continued to be together as well as the stories until their final year. The night before graduation, Glitter held a large party for some of the departing cadets and their families. Scott was walking around with a ring in his pocket all night, waiting for the right moment to ask Peter to marry him in front of all their friends and family. Alas, Peter was caught in a back booth with a slightly older man’s arm around his shoulders kissing his neck. Never had Scott felt more betrayed. To him, the rest of the evening was a tear-filled blur of Peter denying the years of rumours and that moment was with an old friend. While the two broke up, they remain friends, and to this day Peter still denies any malice behind his actions. Scott still misses their relationship considerably, resulting in him only focusing on his work and having a string of wrong dates and failed relationships.

It would take some time for Scott to love again, at the age of 25 he met up again with one of his academy instructors, now turned a Captain in the Corps of Engineers, Richard Quill. He was much older than the impressionable young doctor, took him under his wing, helped mend all that would have been broken. It became a very typical romance, they quickly fell in love, moved in together and spent as much time as they could when both were not on assignment there. As Richard grew to be an Admiral, taking on more command duty they spent more time apart. Part of this, Scott learned prior to his depature for his next posting, was due to Richard’s unfaithful tendancies. Once again, Scott returns to being crushed, having little hope in love and begining to show cynicism towards it.