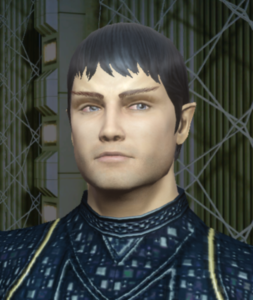 Telhas is of ancient nobility, with already his Vulcan ancestors being royalty. He can trace his bloodline 6,000 years into the past. The seat in the Senate is inherited, and he occupies it with pride. He also holds a position in the Tal Shiar, although his department is kept secret outside the Tal Shiar. He is sent on diplomatic missions from time to time.

Telhas was born as eldest son and heir of one of the oldest noble houses of Romulus and named Valkis, like every first-born male child of his House. The House of Tellus claimed to be descendants of the man who led the Romulan people to Romulus. Although this can be doubted from a historic point of view, tradition meant everything to his parents. Maybe this was because the other claim of the house, to be in direct primogeniture succession of Tellus, one of the leaders of the first Romulan settlers, was true. Plus they were one of the founding houses of the Senate. They were one of the wealthiest families as their house had controlled and exploited the wealth of minerals and ore found in the Kae’raktar mountains when the Romulans built their civilization after planetfall. The wealth they obtained in these early years of Romulan history had been invested to earn even more money as the Star empire expanded.

He missed nothing and, starting when he was three years old, he had the best teachers one could get. The training was far beyond what young Romulans were expected to learn. He had to be perfect. The more he knew, the higher were his parent’s expectations. In thess years, he found and read ancient scrolls in his family’s library. The scrolls were written in ancient Vulcan, a language he had to learn anyway. The knowledge they contained was mostly of philosophical nature, but one showed him how to shield his mind, if he had any psi abilities. And he had.

When he was twenty years old, he began his military education. Actually, he had no choice. Military was a tradition of the house of Tellus. Both his parents were warbird commanders at that time. It was expected of him to serve. After the basic military training it became clear that he had some potential to join either the Tal Diann or the Tal Shiar. Both agencies invited him for some initial tests. During those tests, the Tal Shiar found out that he was able to shield his mind. They told him about a secret training facility where he could fully develop his abilities. He did not care much of their propaganda, but he would take his chance. He stayed there for ten years, eventually becoming the facilities executive officer. The Tal Shiar promised him a great career. But he rejected.

Being 31 years old, Valkis left the Tal Shiar and studied archaeology, Romulan history and administration. His father was senator now, occupying a seat that was passed onto the hru’hfirh s’Tellus as head of a founding member house of the Senate, and expected Valkis to learn some more about history and administration, skills that would benefit him in becoming a senator himself one day. After five years of study, Valkis re-enlisted in the military. He became a Tal Diann agent, which caused severe tensions with the Tal Shiar. He became a sublieutenant in the Tal Diann headquarters, in the division of counterintelligence. Later on, he was stationed aboard warbirds as Tal Diann officer. After his parents were killed in Shinzon’s coup d’etat Valkis became hru’hfirh s’Tellus. Although it was his birthright, he did not take the seat of Tellus in the Senate after Shinzon’s defeat. Instead, he decided that it was in the best interest of the Star Empire to give the seat to his sister Ariana.

Instead of joining the ranks of the Senate he participated in a Federation-Romulan officer exchange program and stayed on the Federation starship USS Thesis as liaison officer for an additional year before he was ordered to return to Tal Diann HQ. In 2385, he resigned from duty and conducted some archaelogical reasearch. This was what saved his life when Romulus and Remus were destroyed by the Hobus supernova. Valkis immediately knew that the Empire itself was in danger now and joined the Tal Diann again. The agency placed him as Tal Diann Master aboard the IRV Imperiax.

On the Imperiax, Valkis had found some time to study ancient scrolls from Vulcan. This gave him further insight into the use of his psi abilities, but it also showed that house s’Tellus was in consanguinity of a man called S’Terion, a king of Cheleb-khor on Vulcan, who lived about six thousand years ago. It took him a while, but finally he decided to claim the ancient titles of Tellus on Vulcan and also express a claim on the Vulcan lands of Tellus. The Vulcan government granted him the titles of Duke of Cheleb-Khor (Vulcan’s Forge) and Count of Aba’kur, probably because these titles granted no power on Vulcan. On few occasions, these titles had a meaning in protocol. He had also been given an opportunity to purchase some land on Vulcan, most of it being desert. He still did, for an extraordinary amount of latinum.

In 2388, while rescuing the Imperiax’ executive officer from the Tal Shiar, rumors state that he was responsible to destroy a Tal Shiar cruiser. These rumors are, in fact, true, but are lacking evidence. After this mission and the destruction of the Imperiax in the Romulan-Cardassian War, he decided to move into politics and took his inherited seat in the senate. However, after his first speeches and changing his name into ancient Vulcan style (Telhas t’Cheleb-Khor thu’S’Terion), he had made so strong enemies in politics and especially in the Tal Shiar, that he had to rely on his allies’ advice and take the position of Romulan ambassador on Deep Space 7, where he would be out of easy reach for the Tal Shiar. Unfortunately, this did not last long and he had to move again and become Romulan ambassador on Deep Space 12.

In early 2389 he settled the issue with the Tal Shiar by means of house politics. He married Nevala T’Daran, a younger cousing of Tal Shiar chairwoman Sonara T’Daran. This immediately promoted House T’Daran into the ranks of the Patricians. Although the marriage had been arranged, he soon fell in love with his wife, a mutual feeling. He returned to the Senate halls and fulfilled the second part of his deal with Sonara T’Daran: He accepted a rank in the Tal Shiar and became supervisor of the psionic warfare program. He also kept his seat in the Senate. He hoped that both together would enable him to reform the Romulan Star Empire step-by-step.

A note on Cheleb-mor, the ancient sword belonging to House Tellus:
Cheleb-mor is an over six thousand years old sword looking much like a Terran jian. The blade is 90 cm long and made of an unknown alloy. It is harder than steel and even harder than duranium. The blade starts with a width of 3 cm at the hilt and reduced to 2 cm a hand before the tip. The first half of the blade is executed as ricasso, the remaining blade is double edged. On the blade is a script shining in bluish letters when light falls upon it in the right angle. The first part of the text is at one side and reads:

The second part, on the other side of the blade, reads:

The hilt hardly exceeds the blade and has a golden gleam, yet it is not made of gold. The grip is sufficient to allow two-handed use. Its dark blue silk wrapping has been renewed a few decades ago. The golden pommel has the form of a falcon’s head.

Cheleb-mor demands a very fast fighting style. It is much more of a stabbing weapon than a cutting weapon and requires utmost precision in combat.